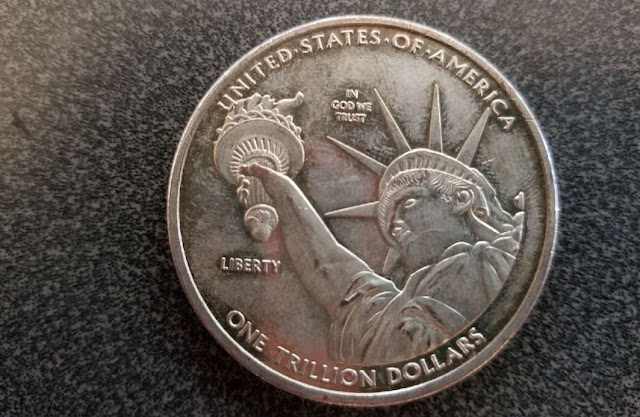 The idea behind the trillion dollar platinum coin goes something like this. According to law, President Obama is permitted to take an ounce of platinum, which is worth around $1,500 in the market, and mint it into a collector's coin that says $1 trillion on its face. Obama then heads off to the Federal Reserve and deposits the coin at face value, his $1,500 worth of platinum having been exchanged for $1 trillion worth of fresh Fed deposits.

Think about the implications of requiring coin dealers and the US Mint to sell Eagles at face value to all comers. Both would be providing the world with the a great risk-free arbitrage opportunity—and destroying their balance sheet in the process.

Here's another interesting anecdote about collector's coins circulating (or not) at face value. From 1997 to 2003 Robert Kahre, a resident of Las Vegas and owner of 6 construction companies, ran a scheme in which he paid wages with gold eagles at their legal tender face value. Rather than hiring someone for say $50,000 a year payable by check, Kahre paid with 45 ounces of  Eagles with a total face value of $2,250 or so. Their declared income of $2,250 was so low that Kahre's workers didn't have to report their income to the IRS. At the same time, Kahre saved on payroll tax. Win-win. Except for the IRS. In May 2003, Kahre's businesses were raided by the tax authorities. Kahre was at first acquitted in 2007, but in 2009 he was found guilty of tax evasion and sent to prison.

The implications of the Kahre case are that despite what's said on their face, collectors coins pass at intrinsic value in the US.

The ability, indeed requirement, to ignore a collector coin's face value when engaging in transactions with these coins is a matter of common-sense self-preservation. If private coin shops like American Gold Exchange, the US Mint, or the IRS were required to let eagles pass at face value they would all suffer tremendous losses. Likewise, if the market price of an ounce of gold fell to $2, those obliged to accept Eagles at their $50 face value would quickly go bankrupt. Face value on collectors coins is merely symbolic, not obligatory.

With the rest of the US already passing collector coins at their intrinsic value, why would Ben Bernanke be expected to accept a platinum collector coin worth $1,500 at its face value of $1 trillion? He has no obligation to do so. As I pointed out, legal tender refers to the types of media that can be used to discharge debts, and Bernanke is not indebted to Obama in any way. All he does is administer the Treasury's account at the Fed.

Nor can Bernanke choose to forgo self-preservation. Section 16.2 of the Federal Reserve Act obligates him to protect the Fed's balance sheet by stipulating the rules concerning Federal Reserve note collateralization. The Act requires that all notes must be backed by

This means that notes cannot be backed by an insufficient amount of collateral security. There is a long history behind section 16.2. I've discussed it before here and here. 16.2 has been liberalized over the decades. In the old days, only a small range of assets could stand as collateral, but now almost any asset can back the note issue. Nevertheless, the 16.2 requirement for sufficient quantity of security remains. If a collector coin's market value is only $1,500, then Section 16.2 presumably prevents Bernanke from depositing the coin in exchange for anything over $1,500 in Fed notes and deposits. Any larger amount of notes and deposits applied for and the coin fails the collateral test.

The case could be made that Bernanke would accept the trillion dollar coin if it were to represent a binding debt of the government to repay the $1 trillion loan. But in this form the coin is no more than a bond or promissory note. Instead of being written on paper, the promise is embossed on platinum. Bernanke can't directly accept government debt, no matter if its inscribed on platinum, paper, or a mere digital entry. He can only bring government debt onto his balance sheet after the market has already purchased it. These limits can be found in sections 13 and 14 of the act. Section 13, which governs the Fed's lending powers, does not give the Fed power to lend to the government, while section 14, which governs open market purchases, only allows the Fed to purchase government bonds on the open market.

Of course, we can speculate about the possibility of Bernanke accepting the trillion dollar coin until we turn blue. We only really know what he'd do when the time actually comes. Bernanke might accept the trillion dollar coin at face value, but he'd surely have both tradition and law on his side in questioning his obligation to do so. However, laws and conventions often bend and morph when circumstances dictate. The Bear Stearns transaction via Maiden Lane I and the AIG bailout via Maiden Lane II and III somehow went through, despite what would seem to be explicit warnings against such actions in the Federal Reserve Act. Until it gets minted, I've got to hand it to the Beowulf, the originator of the trillion dollar coin idea, in having created what seems to be the econ blogosphere's most influential idea of the New Year.

[Update: In the comments with Bill W., I mentioned another bit of legalese indicating that the Fed needn't accept coin from either the government or a member bank. See section 13.1 of the Federal Reserve Act: “Any Federal reserve bank may receive from any of its member banks, or other depository institutions, and from the United States, deposits of current funds in lawful money, national-bank notes, Federal reserve notes, or checks.”  More evidence that Bernanke can say no to a government deposit request. May≠must.]
Posted by JP Koning at 11:52 AM