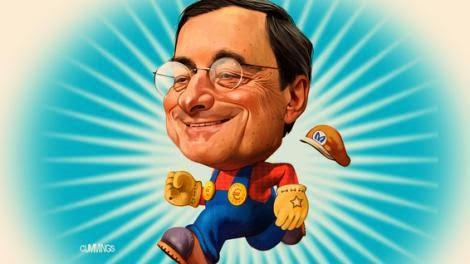 Target2 is the ECB mechanism that allows unlimited amounts of euros held in, say, Greek banks to be converted at par into euros at, say, German banks, and vice versa. As the European situation worsened post credit-crisis, people began to worry about a future scenario in which Ireland, Greece, Spain, Italy, and/or Portugal might either leave the euro or be ejected. If exit occurred, it was expected that these new national currencies, drachmas, punts, and lira, would be worth a fraction of what the euro was then trading for.

The chance that this future "bad" scenario might happen accelerated what had been a steady outflow of deposits from the GIIPS into an all-out run—after all, why would anyone risk being stuck with a Greek euro that might be worthless tomorrow when they could costlessly switch them into a German, Dutch, or Finnish euro today at rate of 1:1? The resulting market process was a reflexive one. Mounting Target2 imbalances caused by the run increased the likelihood of a breakup scenario, amplifying the run and creating even greater imbalances.

What ended the run? ECB President Mario Draghi stepped to the plate in a July 26, 2012 speech and directly addressed what he referred to as convertibility risk.


Within our mandate, the ECB is ready to do whatever it takes to preserve the euro. And believe me, it will be enough... [link]

Draghi's comments, as Gavyn Davies then pointed out, amounted to an explicit commitment to backstop the GIIPS to whatever extent was necessary to quell any fears of euro departure. In essence, he took the future "bad" state of the world in which exit occurred and crushed it under his foot. As this chart shows (this one is good too), the massive inflows into German banks and outflows from the periphery were halted almost to the day of Draghi's speech. After all, if the ECB now guaranteed that Greece and the rest were to remain moored to the union, then a GIIPS Euro was once again equally as good as German, Dutch, or Finnish one.

Blackberry is also encountering a run of sorts as Blackberry users flee into competing phones. In normal times, cell phone brands are like euros—they are homogeneous goods that perform the same task. However, just as fears that Greek euros might one day cease to exist inspired a run into German euros, fears that Blackberry's product line might be discontinued (and left unsupported) are causing an all-out run into iPhones and Androids. After all, why risk being stuck with a legacy Blackberry when, come the expiration of your existing contract, you can costlessly switch into a competing phone that has all the same features, the manufacturer of which is sure to exist a few years from now? Take Pfizer for instance, which recently told its employees that "in response to declining sales, the company [Blackberry] is in a volatile state. We recommend that BlackBerry clients use their BlackBerry devices and plan to migrate to a new device at normal contract expiration."

Blackberry desperately needs to have a Draghi moment whereby the future "bad" scenario—firm dissolution and product discontinuance—is crushed and exorcised, thus putting an end to the run. A long-term commitment with a show of muscle is needed. Has this occurred yet? Last month the company came out with an advertisement titled "You can continue to count on us", highlighting the company's formidable stash of cash and clean balance sheet. A start for sure, but no muscle. Last week, however, investor Prem Watsa stepped forward to play the role of Draghi, recapitalizing Blackberry (along with other investors) to the tune of $1 billion. The infusion should give the firm the raw cash to stay in operation for another few quarters. Is Watsa's line-in-the-sand enough to stop phone buyers from fleeing? Or will shoppers continue to spurn BlackBerry on the chance that more billions will be needed, and Watsa unlikely to stump up the cash? The Globe and Mail quotes Watsa, who gives an accurate account of Blackberry's conundrum:


"Why would you buy a BlackBerry system or a BlackBerry phone if you think the company is not going to survive? Well, that’s out. BlackBerry is here to stay,” he said, adding “There’s no question”

There you go, it's a Draghi moment of sort. Substitute "Blackberry" with "Greek Euro" and you have the exact same message that Draghi conveyed to markets last year in his successful halt of the intra-Eurosystem bank run. Like Greek euros, BlackBerries are presumably here to stay.

The difference between Draghi and Watsa is that a central banker can create any amount of money he or she requires—Watsa, who doesn't have his own printing press, is a little more constrained. However, if Watsa has managed to muster up a true Draghi moment, one that is sufficiently credible with smartphone buyers so as to crush the future "bad" scenario out of existence, then the intra-phone run that has plagued Blackberry is probably over and today may be a good time to own shares.


PS: I don't own BlackBerry shares, but am considering it. Dissuade me if you can, commenters.
Posted by JP Koning at 12:18 AM