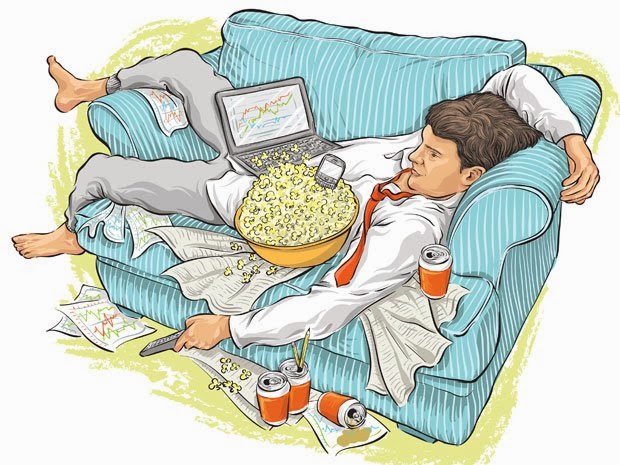 For lazy central bankers, this post describes three lite strategies for getting interest rates below the zero lower bound. Rather than requiring drastic action, these methods can be quickly deployed without having to spend too much energy—leaving plenty of time for the afternoon squash game.

1) Let's start at the beginning. What is the zero lower bound? If a central bank reduces interest rates below 0% then banks will rapidly convert all their central bank deposits into cash. No point accepting a -2% return if you can get 0%, right?

3) We already have a few go-to plays for dealing with our inability to get below zero: quantitative easing, forward guidance, and fiscal policy, each with its own set of warts. While quantitative easing has become a popular tool over the last few years, theory tells us that purchases are irrelevant at the zero lower bound. Promising to keep rates at 0% for longer than is prudent has also been used by a few central banks, notably the Bank of Canada. Unfortunately the market finds forward guidance confusing and may see little credibility in it, given the fact that the central banker who initiates the promise may not be in office to carry it out. This problem is called time inconsistency. And lastly, while fiscal policy may be a good way to evade the zero lower bound problem, it hinges on flaky political processes and arduous negotiations.

4) A more direct way to get around the zero lower bound problem may be necessary. Our lazy central banker might have to make alterations to the very nature of cash itself.

5) A sure-fire way to remove the lower bound is an outright abolition of cash. It gets around the time inconsistency problem and the flakiness of politics. But abolishing cash is a drastic step. Banknotes serves a role in protecting privacy and are popular with the unbanked. Abolish cash and you hurt both. Given the degree of preparation and effort needed to remove cash, and the political wrangling this option would require, a lazy central banker may want to take a pass.

6) Rather than removing cash, just harm it. Silvio Gesell's stamp tax, for instance, attacks cash's pecuniary return. In this spirit, Miles Kimball's crawling peg between electronic currency and paper currency burdens those who own cash with a capital loss. The crawling peg banishes the zero lower bound—without requiring the drastic step of immediately removing all banknotes. It's an elegant solution, you can read the details here (pdf).

7) There are a few drawbacks to a crawling peg. Driving a wedge between paper and electronic currency creates two different sets of prices at the till, one for deposits and the other for cash. A chocolate bar, for instance, might have a sticker price of $1.00 in electronic money, but require a cash payment of $1.05. This will be confusing and inconvenient for shoppers, necessitating an expensive and costly education campaign by our central banker. According to Kimball, instituting a crawling peg requires that a nation enact a unit of account switch. Prices must be set in terms of electronic currency, not paper currency, otherwise the central bank will lose control over the price level. While a switch in standards is by no means impossible, it does require time and effort.

8) Which finally gets us to our lite strategies for lazy central bankers. These options don't suffer from time inconsistency or flaky politics. They get us below zero without requiring the abolition of cash, nor do we get two different sets of prices at the till, nor do we need a nation to switch to a new unit of account. In short, if enacted, they'd keep our system pretty close to the current system.

9) Laziness isn't without a cost. Unlike the abolition of cash and Miles Kimball's crawling peg, the lite methods don't free us entirely of the lower bound. They only soften it up a bit, re-situating the bound a few percentage points lower. This buys room for central banks to cut rates,  but not infinite amounts. If extremely negative rates are necessary, say -6%, then there is no lazy option: best get off the couch and go with a full-out crawling peg.

10) There are a number carrying costs on cash holdings, including storage fees, insurance, handling, and transportation costs. This means that a central bank can safely reduce interest rates a few dozen basis points below zero before flight into cash begins. The lower bound isn't a zero bound, but a -0.5% bound (or thereabouts).

11) The various lite strategies all exploit the fact that differences in carrying costs among the various note denominations mean that banknotes are not naturally fungible. Put differently, bills aren't perfect substitutes for each other. Large denomination notes, say $100 bills, incur lower storage and handling fees than small denomination notes like $10s. After all, a hundred-thousand $10 bills (worth $1,000,000) take up ten times more storage space than a ten-thousand $100s (also worth $1,000,000). However, a central bank renders the two types of notes equivalent by offering to convert pesky low denomination $10s into sleek large denomination $100s at no cost to the owner. This means that the public can avoid the nuisances of small denomination note storage, for free. So at any point in time the note-owning public is bearing the carrying cost of the highest denomination note, not the lowest ones.

12) To get a bite, the following three lazy techniques all boost the carrying cost of cash.

14) By implementing any one of these lite techniques, the additional carrying costs now imposed on cash remove any incentive to convert increasingly negative yielding deposits into banknotes. A central bank that had previously reduced its deposit rate to, say, -0.5% before finding itself snug against the lower bound, will now be able to reduce its deposit rate to a much lower level, say -2.5%, without fear of mass flight into cash.

15) The first method a lazy central banker should consider is the abolition of large denomination notes. A central bank issues a proclamation giving people one month to bring in all $100s for conversion into ten $10 bills. Any large denomination notes remaining in circulation after one month will be disavowed. Once all high-value denomination are demonetized, the market clearing carrying cost on cash holdings will no longer be the superior rate on $100s, but the much heftier one on $10s. The expected return on cash holdings having been diminished, a central banker who had previously found him or herself stuck against the lower bound now has room to go lower without fear of mass flight into cash.

16) Even with the $100 having been abolished, the remaining low denomination notes in circulation can continue to serve a role in protecting privacy and serving the unbanked.

20) Nor does our lazy central banker need to worry about switching standards. Given that consumers only rarely pay with high denomination notes, it's highly unlikely that retailers currently set prices in terms of $100s. In fact, even now retailers often refuse to accept large value notes. It's likely that we probably already live in a world with a low denomination/electronic currency standard.

22) A central banker can now safely guide rates to a much more negative rate than before, say to -2.5% rather than just -0.5%. Prior to instituting a conversion charge, the public would have fled from deposits to cash at such low rates. Now, while people can still convert deposits at no cost into low denomination notes, this offers them no real advantages given the high carrying costs on such notes. And flight into high value notes is forestalled by the conversion fee.

24) The main difference between the second method and the third one is that the exchange rate between high denomination notes and low denomination notes/deposits is allowed to float in the former versus being fixed under the latter.

25) The third lite method is akin to Miles Kimball's crawling peg, except that the conversion penalty is set on high denomination notes only, not cash in general. But if we steadily widen the peg so that it includes mid-value denominations, and then add small denominations, then the third lite technique isn't so lite anymore. It has basically become Kimball's peg. At some point along that transition, we start to inherit the inconveniences of the crawling peg (see point 7). For instance, the dual price level becomes much more inconvenient, especially once $10s (and lower) are included. However, the advantage is that we can now push rates much deeper into negative territory.

26) Which means its possible to incrementally transition from a lite program to an all-out option like a crawling peg or total abolishment of cash. Lazy central bankers may prefer to stick their toes in the water before jumping all the way in.

28) If I was a lazy central banker, of the three lite programs I'd be partial to the second one; the closing of the high denomination conversion window. Removing high denomination notes from circulation would probably have messy political implications and draw the public's wrath. Levying a fee is an assertive, some might say aggressive stance necessitating the creation of new processes and administration expenses. Simply closing the $100 window seems like it would take the least amount of effort. It doesn't require that any new infrastructure or the decommissioning of existing machinery. As for the pricing of high denomination notes, this gets outsourced to the market.
Posted by JP Koning at 2:48 PM