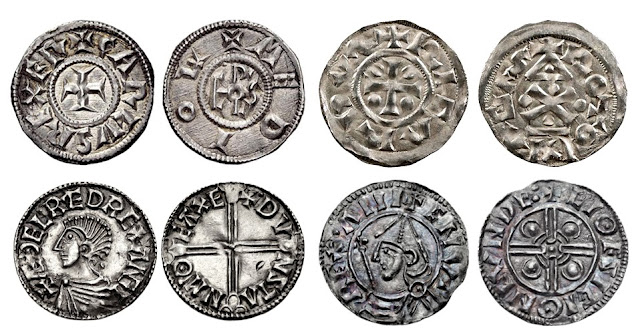 What's the main difference between our modern monetary system and the system they had in the medieval ages? Most of you will probably answer something along the lines of: we used to be on a commodity standard—silver or gold—but we went off it long ago and are now on a fiat standard.

That's a safe answer. But the fiat/commodity distinction is not the biggest difference between then and now.

The biggest difference is that in the medieval age, base money did not have numbers on it. Specifically, if you look at an old coin you might see a number in the monarch's name (say Henry the VIII) or the date which it was minted, but there are no digits on either the coin's face or obverse side indicating how many pounds or shillings that coin is worth. Without denominations, members of a certain coin type could only be identified by their unique size, metal content, and design, with each type being known in common speech by its nickname, like testoon, penny, crown, guinea, or groat. Odd, right?

By contrast, today we put numbers directly on base money. Take the Harriett Tubman note, for example, which has "$20" printed on it or the Canadian loonie which has "1 dollar" etched on one side.

This seemingly small difference has huge consequences for the monetary system. I'll illustrate this further on in my post by having a modern central bank adopt medieval-style numberless money. The interesting thing is that, contrary to our prejudices about commodity-based money, the medieval system had the potential to be a highly flexible monetary system, far more capable of coping with shocks than our current one, and by implementing medieval money, a modern central banker would get a powerful tool to help in his or her efforts to keep inflation on target.

But first, here are a few more important details about the medieval monetary system. Back then, sticker prices and debts were not expressed in terms of coins (say groats or testoons) but were always advertised in the abstract unit of account, pounds (£), where a pound was divisible into 20 shillings (s) and each shilling into 12 pence (d).  Say that Joe wants to settle a debt with Æthelred for £2 10s (or 2.5 pounds). In our modern monetary system, it would be simple to do this deal. Hand over two coins with "1 pound" inscribed on it and ten coins with "one shilling" on them. Without numbers on coins, however, how would Joe and Æthelred have known how many coins would do the trick?

To solve this problem, Joe and Æthelred would have simply referred to royal proclamation that sets how many coins of each type comprised a pound and a shilling. Say Joe has a handful of groats and testoons. If the king or queen has proclaimed that the official rate is thirty testoons to the pound and eighty groats in a pound, then Joe can settle the £2 10s debt with 60 testoons and 40 groats or any another combination, say 75 testoons. If the monarch were to issue a new proclamation that changes this rating, say a pound now contains forty testoons, then Joe's debt to Æthelred must be settled with 100 testoons, not 75.

To sum up, in the medieval ages the method of determining the content of the unit of account was divorced from the physical objects that were in circulation. Rather than appearing on the coin, the proper ratings were printed up on a royal decree. By contrast, in our modern era monetary authorities have stopped the practice of remotely defining the unit of account in favor of striking it directly onto physical and digital objects.

Let's try to get a better feel for what it would be like as consumers if we didn't have numbers on our modern money. Let's convert today's standard into a medieval standard using U.S. currency as our example. Start by removing the words "one cent" from all one cent coins. Americans take to calling them Lincolns, since Abraham Lincoln is on the obverse side. Next, let's strip all mentions of "one dollar" and "$1" off the dollar bill, which now goes by the moniker "a Washington." Finally, blank out any incident of "100" and "one hundred" from the one hundred dollar bill. Say that people now call it the Franklin. (For simplicity, assume the $10s, $20s etc don't exist.)

Say we go shopping for groceries and get a bill for $302.15. Without numbers on our bills and coins, how are we to know how many Lincolns, Washingtons, and Franklins we should pay?

We would start off by launching our Federal Reserve app to check how many Lincolns, Washingtons, and Franklins the Fed has decided to put in the dollar unit of account that day. Now it could be that the Fed is rating the dollar as 100 Lincolns, 1 Washington, and 0.01 Franklins, which would correspond to the ratios we are so familiar with. In which case, the grocery bill can be discharged with three Franklins, two Washingtons, and fifteen Lincolns. Easy.

But there is no reason that the Fed couldn't be setting a different definition of the dollar unit of account that day. Say that the Fed has re-rated the dollar so that it is now worth 140 Lincolns, 1.4 Washingtons, and 0.014 Franklins. It would be as if an old dollar bill now had $0.714 printed on it instead of $1 (where 1/$1.4=$0.714). In effect, this increases the value of the dollar unit of account in terms of physical cash or, put differently, reduces the purchasing power of the Washington/Lincoln/Franklin. The $302.15 grocery bill must now be discharged with four Franklins and twenty-three Washingtons, where the Franklins cover the first $285.71 and the Washingtons cover the remaining $16.43.

So that's pretty interesting, no? In a modern version of the medieval monetary system, not only do we need to keep track of the coins and notes in our wallet, we also need to follow the Fed's ratings, say with an app. It's cumbersome system but it seems to have worked.

As for the central banker's perspective, let me repeat my earlier point: if the Fed (or any other central bank) were to adopt a medieval system, it would have far more flexibility in hitting its inflation targets than it currently does. Right now, an inflation targeting central bank like the Fed can only target the CPI by modifying the nature or supply of the physical and electronic tokens in circulation, say by altering the quantity of these tokens, changing their interest rate, or shifting their peg (to gold or some other currency). With denominations effectively etched onto coins and printed onto notes, the ability to directly manipulate the unit of account by adjusting the number of bills and coins per dollar has been taken away from it.

By blanking out the numbers and defining the coin/bill content of the dollar remotely, the Fed gets an extra degree of freedom. If it wants to create inflation, it simply posts an alert on its app that the dollar will now contain fewer Lincolns, Washingtons, and Franklins than before. In response, stores will quickly increase their sticker prices so that they receive the same real quantity of payment media as before. Voila, the CPI rises. To create deflation, the Fed does the opposite and puts more notes and coins into each dollar. Just as it currently schedules periodic interest rate announcements, the central bank might issue these edicts every few weeks or so.

In some sense, central banks already engage in alterations of the bill/coin content of the dollar when they redenominate currency. But redenominations are rare, usually occurring during hyperinflations when a central bank cancels all existing currency and issues new bills and coins with a few zeros lopped off. They aren't a regular tool of monetary policy because a continuous series of small redenominations would involve constant recoinages and printing of new notes, an expensive way of doing monetary policy.

By removing numbers from bills/coins so that only blanks circulate and then defining the value of those blanks remotely, redenominations become a cheap tool of monetary policy, much as they were in the medieval days. The Fed wouldn't have to call in all bills and coins and print/mint new ones, it would simply announce a re-rating on its app.

In any case, I hope you can see now that the medieval monetary system was far more complex than we commonly assume it to be. Because we are so used to having number on our bills and coins, we'd be quite lost if we were transported back to the 1500s. As for the monetary authorities, they had an extra set of powers that today's central bankers don't have, the ability to directly define the unit of account. Hypothetically, these powers could have been used to target stable prices or nominal income. In reality, monarchs had different motives, including the funding of wars, so they used the tool for that purpose. But that's another story.