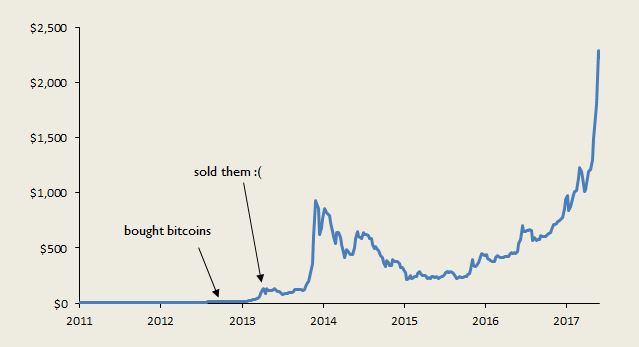 I wrote a bunch of posts on bitcoin between 2012-2015, but they tailed off a bit in late 2015 and 2016 as my attention turned to other subjects, namely old fashioned banknotes and cash, a terrifically fertile topic. Because my bitcoin posts tended to get a lot of comments at the time, I thought it would be worthwhile to go back and review some of the predictions I made, both for my sake and that of my readers.

My predictions tend to fall into three related buckets.
On the first front, I've consistently written that bitcoin won't become a generally-accepted medium of exchange because of its volatility. And this prediction has panned out, so far at least. No, bitcoin has not destroyed VISA, nor has it driven the share prices of remittance providers like Western Union to zero, nor has it been adopted by unbanked Africans and Bangladeshis.

From a more anecdotal perspective, I live in what I like to think is a fairly vibrant part of Montreal filled with early adopters, but I never see shops or cafes that accept bitcoin. None of my circle of friends and family have ever tried the stuff, and when they ask me about it, it's always to gossip about the crazy high prices—not bitcoin-as-a-medium-of-exchange. Let's face it, bitcoin and other cryptocoins are great speculative vehicles, but they're flops as money.

On the second front, I've written about how the distributed ledger aspect of bitcoin could be split off from the token itself and used by financial institutions See here, for instance. This is the rough idea behind the "blockchain" movement that started up in 2015 or so. We'll see if it pans out. I also predicted that central banks would adopt bitcoin technology before banning it, perhaps in the form of a distributed currency, and have since wrote multiple posts on the Fedcoin idea. No central bank has quite got there yet, but they've all started talking about digital currency and have even been experimenting with it. So I think I've done alright on these predictions.

It's boring being right because you don't learn anything. My last prediction, that bitcoin will hit zero, is my most interesting one because I got it so wrong. In 2012, I wrote:


"My hunch is that bitcoin still has a positive value because proper competition will take a few years to truly develop. Let's see where we are in December 2013."


"There is no way to arbitrage this premium away directly, but over time competitors will peck away at it, causing bitcoin's price to deteriorate back to its fundamental value, which I'd guess is <$1."


"If I'm right, in the future bitcoin will be a smaller part of the cryptocoin world than it it now, whereas stable-value non-bootsrapped crypto assets, like Ripple IOUs, will be a larger part of that world."

Given this incredibly wide miss, it's high time to re-evaluate my reasoning for a zero price of bitcoin. Do I turtle-in and keep my prediction or do I update it?

Here's how I've been thinking about the problem.

There are two types of assets in this world. Type A assets can only provide a return to their current holder if a stream of subsequent investors, buyers, or participants are recruited to provide that return. Examples include Ponzi schemes, chain letters, and pyramid schemes. Type B assets, on the other hand, can provide a return to their owner, even if no subsequent person ever steps forward to acquire that asset. Good examples of Type B assets are gold, land, stocks, and central bank-issued banknotes.

Say a buyer's strike suddenly hits the market for a Type B asset. Everyone decides to sell at the same moment so that the asset is offered at $0. An arbitrage opportunity presents itself. Since this asset will either yield a dividend (in the case of a stock), have some usage in decorating (like gold), or is destined to be repurchased by its issuer at some positive price (think central banks withdrawing banknotes by selling assets), anyone who buys it for $0 is getting something for nothing. As people compete to feast on this free lunch, prices will re-ratchet back up until the opportunity has disappeared. For this reason, Type B assets are characterized by price floors and buyers strikes are not crippling.

No equivalent arbitrage opportunity presents itself when a buyer's strike hits a Type A asset. Say Bernie Madoff issues a bunch of tickets, each providing its holder with a spot in a Ponzi scheme. A few days later, no one wants to purchase Madoff's tickets. Sure, you can now buy a ticket for $0, but because they have no intrinsic value the only way you'll be able to come out ahead is by selling it for more to another buyer, say for $1. This will require that you (or someone else) incur expenses on marketing the scheme i.e converting already angry sellers into buyers. This sounds like an awful lot of work, certainly too much to merit paying anything more than $0. Probably better to start an entirely new Type A asset than try to reboot the failed one. The upshot is that because Type A assets lack an arbitrage mechanism and marketing is costly, buyer's strikes quickly bring the game to an end. There is no floor.

Bitcoin is a Type A asset. It is unconsciously so, there being no Madoff-like evil genius at the centre of the scheme. It just sort of emerged spontaneously.

Like other Type A assets, bitcoin lacks a price floor. When a bitcoin buyer's strike hits, and bids across all the bitcoin exchanges evaporate, a bitcoin held in your wallet is worthless. There is no underlying business that can throw off dividends nor a central issuer that can cancel unwanted tokens. Sure, you can always purchase a bitcoin for $0, but in order to come out ahead you'll have to convince someone to buy it for $10. This means you'll have to regenerate the hype, excitement, and belief that initially spawned a positive bitcoin price. If you're not willing to spend time and money on these efforts, you better hope someone like Andreas Antonopoulos will. Whatever the case, any effort to push bitcoin back into positive territory will be costly.

Given that buyer's strikes are the death knell for Type A assets, it is vital to recruit a constant stream of new buyers to the cause. In bitcoin's case, recruitment has been easy. No Ponzi scheme ever boasted as engaging a mythology as bitcoin, starring the dashing and mysterious Satoshi Nakamoto, a radically decentralized digital currency poised to destroy the existing financial system, and "in math we trust". Because these ideas are so catchy, the mythology has pretty much sold itself—an incredibly cost-effective way of recruiting new participants. Every time bitcoin has experienced a lull in buying and its price has plunged, it has never quite fallen to zero. A batch of new converts, inspired by the latest Andreas Antonopoulos video on YouTube, has always emerged from the woodwork.

While the mythology is strong, it has long since spread into the easy cracks, i.e. libertarians and tech geeks. New target demographics, many of which do not agree with the core philosophy underlying the mythology, won't be so easily convinced to add their bids to the queue. As for Satoshi Nakamoto, he/she is almost ten years old now and getting stale. And one of the core promises of the mythology, the birth of a generally-accepted digital currency, has fallen flat. People are getting jaded.

Luckily, Bitcoin has always had a far more seductive recruiting tool, a rapidly rising price. While the technology and philosophy underlying bitcoin might motivate a few geeks, a 50% price jump is a universal intoxicant. Past returns bring the promise of future returns, waves of new buyers pushing the stuff ever higher. However, this process faces limits. The bigger bitcoin gets, the larger the stream of recruits needed to drive the price higher. At some point its market capitalization will get so large that the population of buyers necessary to keep the ball rolling will be exhausted. And when bitcoin can no longer demonstrate that it offers a superior return, a buyer's strike will hit as everyone rushes to sell at the same time, it's price falling to zero.

So in the end, even though I've been terribly wrong I'm going to stick to my guns on this one. If I'm going to recant my bitcoin-to-zero views, you're going to have to convince me that a Type A asset can last indefinitely. I don't see how. Empirically, we know that Type A assets are precarious, short-lived things. There are no Ponzi or pyramid schemes still running from the 1800s, or the 1920s, or even from 2001. Bernie Madoff's Ponzi scheme, which popped in 2008, may have been the longest running Type A asset ever, it's alleged start date being the early 1970s. That's over thirty years. (Public run pension schemes don't count, since the government can coerce participation). If there is a reason that bitcoin can escape this fate, please explain in the comments section—maybe I'll see the light.
Posted by JP Koning at 12:04 AM