When a rising stock market is a bad thing 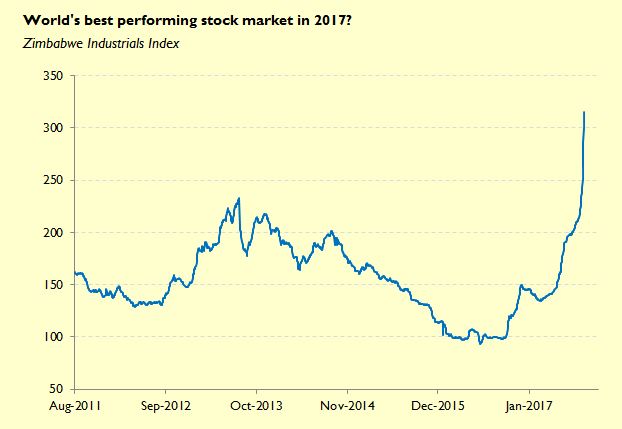 If the world had a single cauldron for mixing various monetary phenomena, it would be Zimbabwe. Over the last two decades, it has experienced pretty much everything that can happen to money, from hyperinflation to deflation, demonetization to remonetization, dollarization and de-dollarization, bank runs, bank walks, and more.

Adding to this mix, the Zimbabwe Industrial Index—an indicator of local stock prices—has recently gone parabolic, having more than tripled over the last twelve months. That's a good sign, right? Beware, these gains aren't real. As is often the case in Zimbabwe, the rise in stock prices is a purely monetary phenomenon.

Ever since the great Zimbabwean hyperinflation led to the domestic currency becoming worthless in 2008, U.S. dollars have served as the nation's currency and unit of account. However, Zimbabwe's central bank, the Reserve Bank of Zimbabwe (RBZ), has spent much of the last two or so years surreptitiously bringing a new parallel monetary unit into circulation. These new units, informally referred to as RTGS dollars, are a digital form of money, specifically a deposit held at the central bank. (I described them here).

At the outset, RTGS dollars were denominated in U.S. dollars and supposedly convertible into genuine U.S. banknotes. We now know these units were only masquerading as U.S. dollars. By early 2016, huge lineups began to appear outside banks as Zimbabweans unsuccessfully tried to convert their deposits into real U.S. cash. When conversions finally became possible it was only because the RBZ had introduced its own paper currency, a 'bond note', in late 2016. These bond notes were themselves supposed to be fully fungible with U.S. dollars thanks to a promise of 1:1 convertibility, at least if you believed the nation's central banker, but this has never been the case.

Over the last year a great redenomination has been occurring as all Zimbabwean prices—including that of ZSE-listed stocks—are shifted over from a genuine U.S. dollar standard to an RTGS dollars/bond note standard. Prior to 2016, if you sold a stock or received a dividend, you'd get U.S. dollars, or at least a pretty decent claim on the real thing. Now, you get RTGS dollars—which can only be cashed out into an equally dodgy parallel currency, bond notes.

The incredible 300% rise in the Zimbabwe Industrial Index is a reflection of the redenomination of stocks into an inferior monetary unit and that unit's continued deterioration. For instance, if you were willing to sell your shares of Delta Brewing for $10 prior to the redenomination, you'd only be willing to sell them at a much higher level post-redenomination, say $15, in order to adjust for the diminished purchasing power of the money you'll receive upon sale. RTGS dollars are not U.S. dollars. After adjusting the Zimbabwe Industrial Index for the decline in the value of the money in which stocks are denominated, things certainly wouldn't look as bullish as the chart above indicates.

What is the actual exchange rate between RTGS dollars/bond notes? We can get a pretty good idea by looking at the prices of dual-listed shares. The shares of Old Mutual, a global financial company, trade in both Harare and on the London Stock Exchange. See chart below, courtesy of Gareth on Twitter. 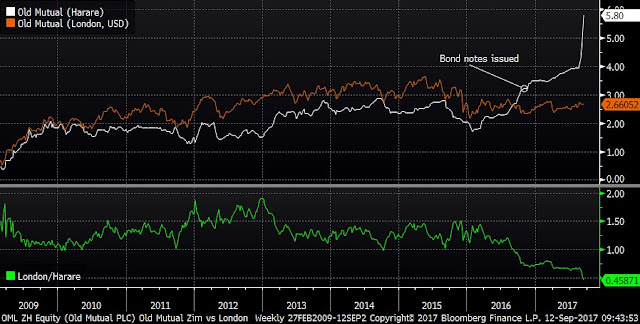 Old Mutual investors have the ability to deregister their shares from one exchange and transfer them for re-registration on the other. Arbitrage should keep the prices of each listing in line. After all, if the price in London is too high, investors need only buy the shares in Zimbabwe, transfer them to London, sell, and repurchase in Zimbabwe, earning risk-free profits. If the price in Zimbabwe is too high, just do the reverse.

The ratio of the two Old Mutual listings (the green line above) provides us with the implicit exchange rate between genuine U.S. dollars and dollars held in Zimbabwe. In 2009 the two listings traded close to parity (i.e. around $2 each), which makes sense because Zimbabwe had dollarized by then, and dollars-in-Zimbabwe were fungible with regular dollars. From 2010 to 2016 the dollar-denominated price in London was above the price in Zimbabwe. This discrepancy may be due in part to the fact that Harare-listed Old Mutual shares aren't very liquid, so they suffer a liquidity discount. Another reason is that the authorities place a ceiling (i.e. fungibility limits) on the number of Old Mutual shares that can be deregistered from the Harare market and dropshipped into London. With all of the space under the ceiling having presumably been used up, it would have been impossible to arbitrage the difference between the two prices, the Harare counter falling to a permanent discount.

So the Old Mutual ratio was probably not a good indicator of the implicit exchange rate between 2010 and 2016. However, in June 2016 this ceiling was raised, at which point arbitrage would have once again been possible. As such, the ratio would have probably returned to providing a decent indicator of the exchange rate between a dollar-in-Zimbabwe and a genuine dollar.

You can see that Old Mutual is currently valued at $5.80 in Zimbabwe whereas it only trades in London for around $2.66 per share (after converting from pounds into US dollars). This means that Zimbabweans are willing to put $5.80 in one end of the sausage maker in order to get $2.66 out from the other. So a dollar-in-Zimbabwe, which was trading at par to U.S. dollars just two years ago, is now worth just 46 cents. That's quite the inflation rate. I don't see things slowing down, either.


P.S.: Some investors will no doubt want to say the same thing is going on with the US and Europe with loose monetary policy creating so-called asset price inflation. I disagree.

P.P.S: Gareth has provided another chart. It shows the implied exchange rate between dollars-in-Zimbabwe and genuine U.S. dollars using the only other fully transferable dual-listed counter, PPC, a cement company that is also listed in Johannesburg. Note how close the PPC rate follows the Old Mutual rate. 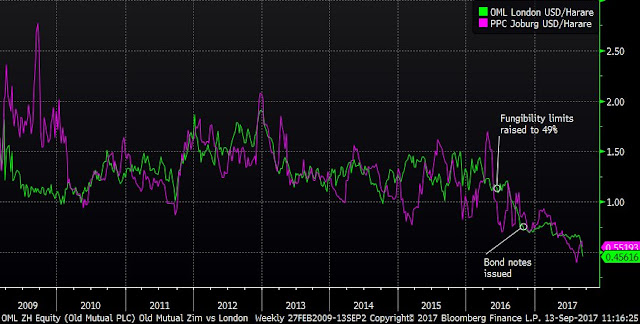