I like to think of the International Monetary Fund's special drawing rights (SDR) program as the world's largest Local Exchange Trading System, or LETS. A truly unique part of the monetary landscape, what follows is a short visual essay on SDRs.

What is an SDR?

An SDR has two aspects. First, an SDR is a unit of account, or, put differently, a measure of value. As a unit-of-account, the SDR is defined by the IMF in terms of a reference good, or a medium of account. When the SDR was first introduced in 1969, an SDR was defined as 0.888671 an ounce of gold, so the yellow metal was the SDR's first medium of account. The IMF later redefined the SDR as a certain quantity of central bank currencies. As of 2012, an SDR is comprised of a basket of 0.423 euros, 12.1 yen, 0.111 pounds, and 0.66 US dollars. Thus the modern day SDR is defined in terms of multiple media of account.

In addition to existing as a unit of account, SDRs also function as media of exchange. This is the aspect of SDRs I'll focus on from here on in.

All LETS need an administrator. The administrator takes on no risk, nor are they liable for credits issued. They simply maintains the books of the LETS and ensure that the system operates efficiently.

Much like a LETS administrator maintains a LETS, the IMF "SDR Department" maintains the SDR system. SDRs are not issued by the IMF, nor are they claims on the IMF. Rather, the community of nations jointly issues SDRs. In the SDR system, each country's respective line of credit is referred to as its "allocation" of SDRs. In general, the larger a nation's GDP, the greater its allocation. The US's current allocation is around SDR 35 billion, whereas Canada's is SDR 6 billion. Cyprus's allocation amounts to a meager SDR 132 million. (One SDR is worth about US$1.50, so Canada's stash of SDRs comes out to around $9 billion)

SDR holdings vary over time as SDRs are spent from nation to nation and as new credits are created. The chart below shows total SDRs in existence. It gives a sense of how SDRs are distributed between some of the program's largest members and blocks. 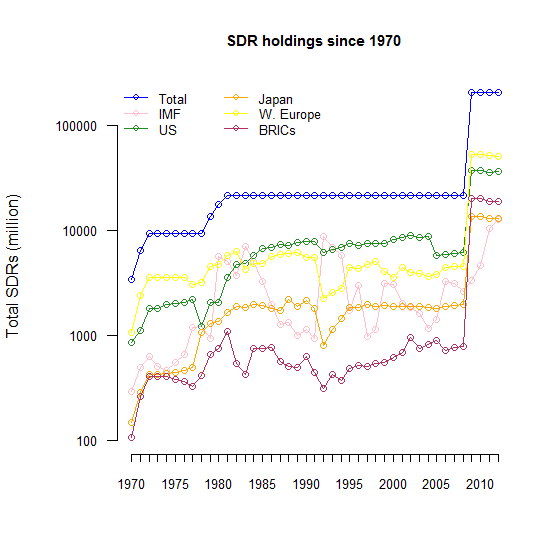 Individual members can't simply create new SDRs willy nilly. All members must jointly agree to create them. In 1971, 1972, 1979, 1980, and 1981 the total amount of SDRs was increased, but after that a long freeze set in. In 2009, in the midst of the credit crisis, members agreed to an increase in SDR credits from $21 billion to $204 billion. You'll notice in the chart that the BRICs received a far larger shot of SDRs than they did during previous allocation top-ups because their relative position in world GDP has increased so much.

It's particularly interesting to break down the distribution of SDRs. Over time, members will either spend away their SDR credits so that they are holding less SDRs than originally allocated, or they will acquire SDRs so that they are holding more than they were originally allocated. Surplus nations receive interest payments from deficit nations.** We can see the distribution of surplus and deficit countries in the histogram below. In general, far more countries are in an SDR deficit position than a surplus position. Put differently, most counties hold less SDRs than they were initially allocated. 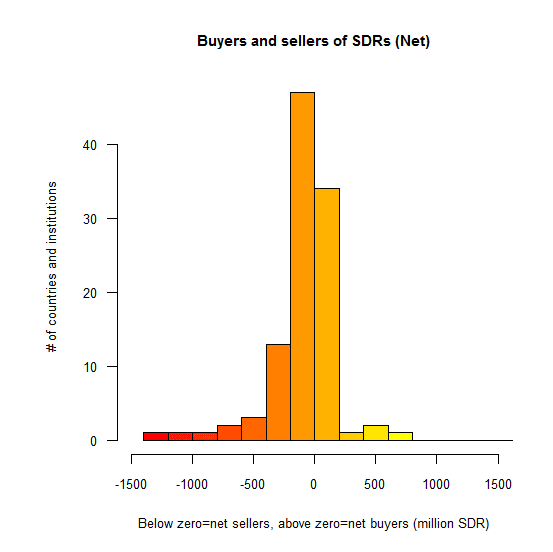 ...which doesn't make much sense. If countries spend away SDRs, someone must be left holding the bag. SDRs cannot be uncreated. This is where the IMF once again re-enters our story. While only states can enjoy SDR allocations, certain supranational organizations like the IMF are allowed to purchase SDRs from states after SDRs have been created.*** As my first chart shows, the IMF is a large holder of SDRs and possesses a portfolio that shows much more volatility in scope than the other nations and blocks.

Let's explore this more. The chart below ranks all countries by the excess of holdings over allocations. Deficit countries lie below 0, surplus ones are above. I've added the IMF too which, as the chart shows, is by far the system's largest accumulator of SDRs. The IMF currently holds around SDR 12.7b. The only reason that most countries on the chart are able to be in deficit positions is because the IMF serves as an SDR sop.


Try playing with the slider above by pulling the top tab from 12,691 down to 0 or so. This filters out the IMF and the surplus nations, thereby providing more resolution on the system's greatest deficit countries, which includes the Ukraine, India, Romania, and Hungary. The Ukraine, for instance, has sold of SDR 1.3 billion of its initial allocation (more on this later).

It's also useful to rank countries by their percent surplus/deficit rather than their absolute surplus/deficit. In the chart below, those countries distributed close to the 100% level have about the same number of holdings that they were initially allocated. Anyone over the 100% line holds more SDRs than they were allocated, and those below 100% have been sellers.

Use the slider above to zoom in on the biggest surplus countries. Oddly, you'll see that Libya leads the pack, holding 150% of its initial allocation. One reason for this may be the fact that the Libyan dinar is pegged to the SDR, a link that has been in place since 1986. A buffer of SDRs would be necessary for the Libyan monetary authority to protect the peg. According to the Sadeq Institute, the choice of the SDR was made by the Gadaffi regime in "symbolic retaliation" to the US. Prior to 1986, Libyan dinar's had been pegged to USD. Botswana also has an outsized SDR portfolio. The Botswanan Pula has been pegged to a mix of the South African rand and the SDR since 1980, a policy that would presumably require a large stock of SDRs.

Zooming in on the deficit side of the chart, you'll see that the Ukraine is the third largest deficit nation, having sold all but 0.45% of its initial allocation. Ukraine was hit hard by the 2008 credit cirsis. It also imports terrific amounts of natural gas, much of which gets exported on to Western Europe. In order to pay its natural gas bill late in 2009, it used almost its entire SDR allocation. 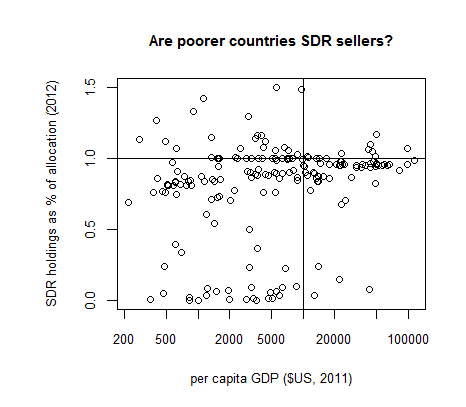 Most rich nations, those in the two right quadrants with per capita GDP in excess of $10,000, tend to cling closely to 1.0. They are neither in large surplus nor deficit positions relative to the system. Iceland and Hungary, which hover near the bottom of the bottom-right quadrant, are outliers. Both have per capita GDP's above $10,000 but have largely drawn down their SDR balances. Hungary, which only received its first allocation of SDRs in 2009, was hit hard by the financial crisis and  forced to liquidate many of its new SDRs in order to meet bills.

What all these charts illustrate is that except for the IMF (and a few countries that fix to the SDR), only a minority of countries have been net purchasers of SDRs. Most have been sellers. Put differently, members of the SDR LETS have been quite content to be short SDRs, not long. Why? Many poorer countries are no doubt forced by circumstances to sell off a large part of their allocation. But even then, a large proportion of wealthy countries including almost every European nation, the UK, Australia, India, Brazil, and Canada are in deficit.

I'm speculating here, but the general aversion among states to holding SDRs may be due to a weak point that the SDR system shares with any other LETS system. Consider this: what happens to a LETS when a member in deficit splits town only to never be seen again? If the departing member fails to rebalance their account prior to leaving, then the amount by which they are in deficit will never be recouped by remaining members. All members must collectively absorb the loss. The same goes for SDRs. If Iran wishes to leave the system, what guarantees that prior to departure they'll honour their obligation to the system by purchasing enough SDRs to return them to an even level?

Taking this even further, imagine if a large block of deficit nations left the SDR system. What guarantees that SDRs will continue to be valued at their stipulated value of 0.423 euros, 12.1 yen, 0.111 pounds, and 0.66 US dollars? Remaining nations may start to bid SDR prices down until SDRs trade at a wide deficit to their ideal value in terms of media of account. At some point, the IMF might be required to announce a lower value for the SDR in order to catch up to its declining market value.

Alternatively the IMF could prop the system up by purchasing all SDRs at their ideal value of 0.423 euros, 12.1 yen, 0.111 pounds, and 0.66 US dollars. If it did so, the IMF would be left holding a large chunk of the system's SDRs.

But hold on a sec... isn't that already the case? Most countries have been net sellers, leaving the IMF (and other supranationals) currently holding some 6.2% of the total SDR float. This might be a sign that member nations have from time to time valued the SDR at somewhat less than 0.423 euros, 12.1 yen, 0.111 pounds, and 0.66 US dollars and, given the opportunity to sell at an overvalued rate to the IMF, they have seized that opportunity. The asymmetric distribution of SDRs does not give one much confidence in SDRs as assets.


*Many LETS do not limit member lines of credit. They leave it up to members to self-monitor the system.
**The SDR system defers markedly from a LETS in this respect. Most LETS frown on interest payments.
*** Other parastatals currenlty holding SDRs inclue the Arab Monetary Fund, Bank for International Settlements, Bank of Central African States, Central Bank of West Africa, European Central Bank, and the Islamic Development Bank. Total holdings of these instituitions comes out to about 1/12th that of the IMF's SDR holdings.
Posted by JP Koning at 9:43 AM