Earlier this week the New York Times took up the knell for eliminating high value bank notes, echoing Larry Summers' earlier call to kill the $100 in order to reduce crime which in turn was a follow up on this piece from Peter Sands. More specifically, Summers says that "removing existing notes is a step too far. But a moratorium on printing new high denomination notes would make the world a better place."

As an aside, I just want to point out that Summers' moratorium is an odd remedy since it doesn't move society any closer to his better place, a world with less crime. A moratorium simply means that the stock of $100 bills is fixed while their price is free to float. As population growth boosts the demand for the limited supply of $100 notes, their price will rise to a premium to face value, say to $120 or $150. In other words, the value of the stock of $100 bills will simply expand to meet criminals' demands. Another problem with a moratorium is that when a $100 bill is worth $150, it takes even less suitcases of cash to make large cocaine deals, making life easier—not harder—for criminals. To hurt criminals, the $100 needs to be withdrawn entirely from circulation, a classic demonetizaiton.

With that distinction out of the way, let's deal with three of the motivations for demonetizing high denomination notes: to reduce criminality, to cut down on tax evasion, and to help remove the effective lower bound.

Summer's idea is to kill the $100 bill so that criminals have to rely on smaller denominations like $20s. Force criminals to conduct trade with a few suitcases filled with $20 bills rather than one suitcase filled with $100 bills and they'll only be able to jog away from authorities, not sprint. What sorts of criminals would be affected? The chart below (from this article by Peter Sands) builds a picture of cash usage across the different types of crime. 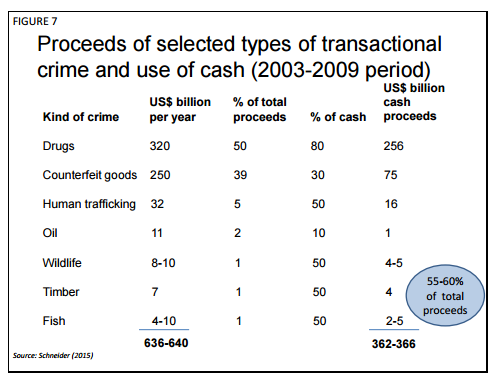 As the chart illustrates, the largest illegal user of cash is the narcotics industry. So presumably the main effect of a ban of $100s will be to raise the operating costs of drug producers, dealers, and their clients.

But should we be sacrificing the benefits of the $100 bill in the name of what has always been a very dubious enterprise; the war on drugs? An alternative way to reduce crime would be to redefine the bounds of punishable offences to exclude the narcotics trade, or at least certain types of drugs like marijuana. Law enforcement officers could be re-tasked to focus on the cash intensive crimes that remain, like human trafficking and corruption. In that way crime gets more costly and we get to keep the $100 to boot, which (as I'll show) has some very important redeeming qualities.

Cash is certainly one of the best ways to evade taxes, but there are other methods to reduce tax evasion. For instance, Martin Enlund draws my attention to a tax deduction implemented by Sweden in 2007 for the purchase of household related services, or hushållstjänster, including the hiring of gardeners, nannies, cooks, and cleaners. In order to qualify the services must be performed in the taxpayer’s home and the tax credit cannot exceed 50,000 SEK per year per person. This initial deduction, called RUT-avdrag, was extended in 2008 to include labour costs for repairing and expanding homes and apartments, this second deduction called ROT-avdrag.*

Prior to the enactment of the RUT and ROT deductions, a large share of Swedish home-related purchases would have been conducted in cash in order to avoid taxes, but with households anxious to get their tax credits, many of these transactions would have been pulled into the open.

We can evidence of this in the incredible decline in Swedish cash demand ever since:


Sweden has the distinction of being the only country in the world with declining cash usage. The lesson here is that it isn't necessary to sacrifice the $100 in order to reduce tax evasion. Just design the tax system to be more lenient on those market activities that can most easily be replaced by underground production.

Yep, those advocating a removal of $100s are right. Central banks can evade the effective lower bound on interest rates and go deeply negative if they kill cash, starting with high denomination notes.

But as economists such as David Beckworth have pointed out, you can keep cash and still go deeply negative. All a central banker needs to do is adopt Miles Kimball's proposal to institute a crawling peg between cash and central bank deposits. This effectively puts a penalty on cash such that the public will be indifferent on the margin between holding $100 bills or $100 in negative yielding deposits.

Another way to fix the lower bound problem is a large value note embargo whereby the Fed allows its existing stock of $100 bills to stay in circulation but doesn't print new ones (much like Summers' moratorium). This means that if Yellen were to cut deposit rates to -2% or so, the price of the $100 would quickly jump to its market-clearing level, cutting off the $100 as a profitable escape route. As for the lower denominations, the public wouldn't resort to them since $20s are at least as costly to hold as the negative rate on deposits. Unlike Miles' proposal a large value note embargo doesn't allow for a full escape from the lower bound, but it does ratchet the bound downwards a bit, and it keeps the $100 in circulation.

Why should we keep it?

The $100 bill is the monetary universe's Statue of Liberty. In the same way that foreigners have always been able to sleep a little easier knowing that Ellis Island beckons should things go bad at home, they have also found comfort in the fact that if the domestic monetary authority goes rotten, at least they can resort to the $100 bill.

The dollar is categorically different from the yen, pound or euro in that it is the world's back-up medium of exchange and unit of account. The citizens of a dozen or so countries rely on it entirely, many more use it in a partial manner along with their domestic currency, and I can guarantee you that future citizens of other nations will turn to the dollar in their most desperate hour. The very real threat of dollarization has made the world a better place. Think of all the would-be Robert Mugabe's who were prevented from hurting their nations because of the ever present threat that if they did so, their citizens would turn to the dollar.

I should point out that the U.S. gets compensation for the unique role it performs in the form of seigniorage. Each $100 is backed by $100 in bonds, the interest on which the U.S. gets to keep. So don't complain that the U.S. is providing its services as backup monetary system for free.

Foreigners who are being subjected to high rates of domestic inflation will find it harder to get U.S dollar shelter if the $100 is killed off; after all, it costs much more to get a few suitcases of $20 overseas than one case of $100. This delayed onset of the appearance of U.S. dollars as a medium of exchange will also push back the timing of a unit of account switch from local units to the dollar. As Larry White has written, money's dual role as unit of account and medium of exchange are inextricably linked. People will only adopt something as a unit of account after it is has already been circulating as a medium of exchange. A switch in the economy's pricing unit is a vital remedy for the nasty calculational burden imposed on individuals and businesses by high inflation. The quicker this tipping point can be reached, the less hardship a country's citizens must bear. The $20 doesn't get us there as quick as the $100.

So contrary to Summers, I think we should think twice before killing the $100. The U.S. has a very special to role to play as provider of the world's backup monetary system; it should not take a step back from that role. Criminals, tax evaders, and the lower bound can be punished via alternative means. I'd be less concerned about killing other high denomination notes such as the €500, 1000 Swiss franc, or ¥10,000. That's because inflation-prone economies don't euroize or yenify—they dollarize.


Addendum: If Summers is genuinely interested in combing the world of coins and bills for what he refers to as a 'cheap lunch', then there's nothing better the U.S. can do than stop making the 1 cent coin, which is little more than monetary trash/financial kipple. Secondly, replace the $1 bill, which is made out of cotton and supported by the cotton lobby, with a $1 coin. The U.S. lags far behind the rest of the world in enacting these simple cost cutting efforts.


*See here and here for more details on RUT and ROT avdrag,
** Martin Enlund has a great post here on Sweden's cash policies.