Are the Swiss fleeing deposits and hoarding cash? 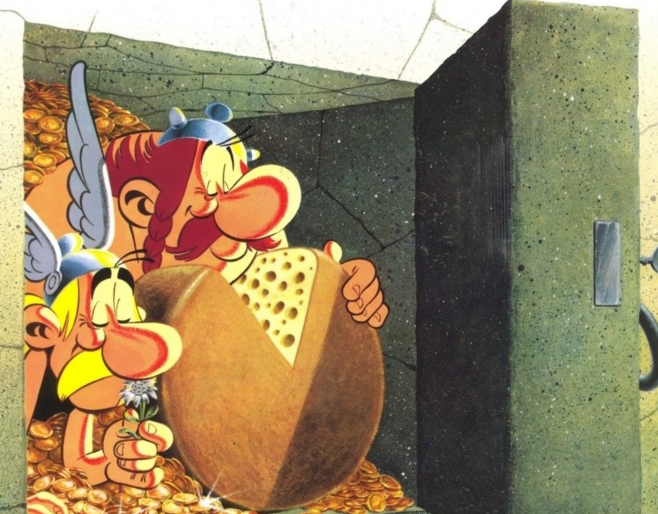 Have Swiss interest rates fallen so low that the public is finally bolting into cash? The Wall Street Journal and Zero Hedge think so. They both point to big jump in 1000 franc notes outstanding as evidence that Switzerland has finally breached the effective lower bound to interest rates.

Let's not get too hasty. Yes, the current run into paper francs may have something to do with Switzerland having hit its effective lower bound, the point at which paper francs provide a superior return to electronic francs. But Swiss francs also serve as a global safe haven asset. And this safe haven demand, operating entirely independent from effective lower bound demand, could be motivating people to amass 1000 franc notes in vaults.

The effective lower bound problem is the idea that if a central bank drops rates low enough, a tipping point will be reached at which it becomes cheaper to hold 0% yielding banknotes and incur storage fees than to stay invested in negative yielding deposits. The large spike in demand for the 1000 franc note, Switzerland's largest value note and thus the lowest cost Swiss storage option, may be the first indication that a tipping point has been reached.

Let's look at the data. Below is a chart that shows the year-over-year change in Swiss franc banknotes outstanding as well as deposits. For comparison sake I've divided the banknote data into a 1000 franc series and all other franc notes. 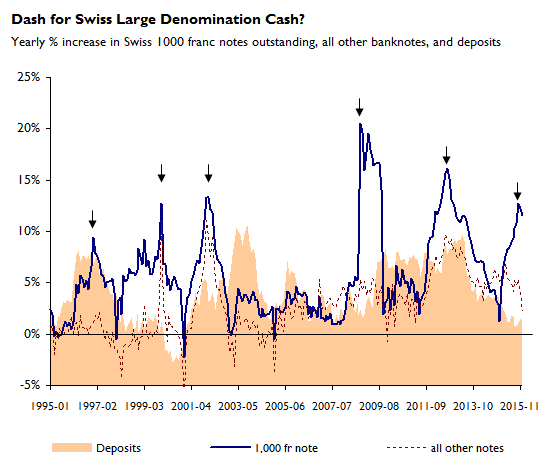 The current jump in demand for 1000 notes, the blue line, is just one of six spikes over the last two decades. You can see that some of these spikes have been accompanied with jumps in demand for smaller notes and deposits, and some haven't.

In the next chart I've subtracted the yearly percentage change in Swiss bank deposits outstanding from the percent change in 1000 franc notes in circulation to show the degree to which the demand for large value cash is exceeding that of deposits. 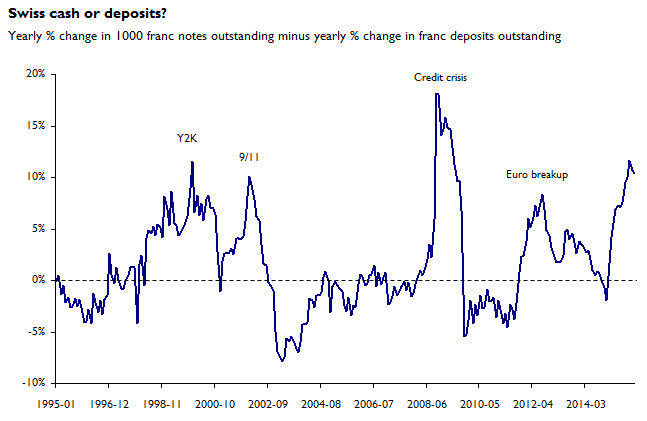 If we are at the effective lower bound, we'd expect to see simultaneous implosion in deposit growth and an explosion in cash growth. The blue line should be at its highest point ever. What we actually see is a mere 10.3% differential. The quantity of notes in circulation is growing at 11% while deposits are growing at just 0.7%. This level is by no means extreme; five other spikes in the cash-to-deposit differential are apparent in the chart, most of which plateaued at or above the current level. These previous spikes in demand for 1000 notes occurred when Swiss interest rates were above zero, so something other than lower bound concerns must have motivated them. What are they?

The jump in 1999 is certainly Y2K-related as people fretted that the banking system would collapse and thus hoarded paper francs. And the 2001-02 spike in demand for 1000 franc notes is probably linked to 9/11 as well as the ongoing collapse in stock markets. The sudden rise in demand in 2008 coincides nicely with the credit crisis. Finally, the 2011-12 rise occurred in parallel with growing fears about Target2 imbalances and a potential euro break up, the run into 1000 franc notes coming to a halt almost to the month of Draghi's famous speech to do 'whatever it takes.'

So the lesson is that Swiss 1000 notes play a role as a safe haven asset. When bad things happen, they are preferred to other note denominations and franc deposits.

Fast forward to the present, I can use this safe haven status to tell a story about the current spike in demand. The coming to power of Syriza late in 2014 and a slow-moving euro crisis led to a sudden preference for 1000 franc notes, much like how the period of euro skepticism in 2011-12 stoked demand for Swiss cash. Concerns over China, the oil price collapse, growing credit worries, and a bear market in equities have further incited investor movement into large denomination francs. At the same time, deposit growth is relatively neutral, a pattern reminiscent of the credit crisis. As these concerns abate, the run into 1000 franc notes will subside, even if Swiss interest rates stay locked in negative territory.

I think that's a pretty reasonable story. The upshot is that while the run into 1000 franc notes could certainly indicate that the effective lower bound has been triggered, it is by no means the only explanation. People may simply be accumulating the 1000 as a safe asset in the context of growing global worries. Absent a smoking gun, Tommy Jordan, head of the Swiss National Bank, will probably not be using the increase in large denomination notes outstanding as a reason to avoid further rate cuts, at least not yet. When demand growth for 1000 notes is exceeding that of deposits by 30% or so, then he should be concerned.