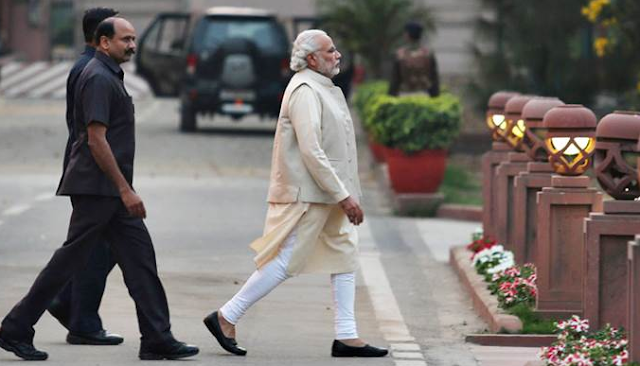 We are more than thirty days into Narendra Modi's demonetization campaign, and while many of the commentators I follow say that it is admirable of Modi to try to reduce the role of black money (wealth held by tax-evaders and criminals) and increase digital money adoption, most say that demonetization is not the way to go about it.

In short, the idea behind Modi's demonetization is to require everyone who owns old 1000 and 500 rupee notes to bring them to a bank before year-end for conversion into new banknotes or to be deposited into an account. By forcing Indians to re-familiarize themselves with dormant accounts, or open new ones, the architects of the plan hope that India's reliance on cash as a medium of exchange will be reduced. Any amounts above the ceiling require proper documentation. Those who own large amounts of cash for undocumented reasons, either because they are evading taxes or engaging in criminal behaviour, will therefore be unable to make the switch, their money expiring worthless by year's end. Having been taught a lesson, they may choose to permanently move some of their operations into the official sector.

Kaushik Basu, World Bank chief economist from 2012-2016, is particularly pessimistic about the policy, noting that while he agrees with the Reserve Bank of India's estimate that the economy will probably grow at 7.1% in 2016-17, from 7.6% estimated earlier, he expects a "huge drop" in the economy next year. "Money works like blood," says Basu, invoking one of the Physiocrat's classic analogies of the economy to the human body.

I certainly agree with Basu's use of the money-as-blood analogy, but my hunch is that temporary media of exchange will spring up to take the at least some of the space heretofore occupied by Modi's demonetized banknotes. My mental model for understanding demonetization is the Irish bank strike of 1970. For six months banks were shuttered, Irish citizens entirely cut off from their bank accounts. Cheques could not be deposited, nor could the central bank use the branch banking system as a means to get paper money into the economy.


Rather than suffering a huge blow, the Irish economy continued to function as it did before. Into the void vacated by banks and cash, post-dated cheques emerged as a the economy's blood, its circulating medium of exchange, with pub owners acting as informal credit evaluators.

Like Ireland in 1970, India suddenly finds itself deprived of a large portion of its money. In the place of 1000 and 500 rupee notes I expect informal credit to take some of its place, the effects on the economy therefore not being as devastating as Basu hints. See for instance this:

While many commentators are already declaring the demonetization to be a success or a failure, we won't have a good sense of this for several years. What sort of data should we be evaluating along the way? One of the effects we'd expect to see in a successful policy is a long-term reduction in the usage of cash, both as licit users of banknotes are diverted into the banking system and illicit users, burned by the forced switch out of old 1000 and 500 rupee notes, migrate out of the underground economy into the official economy. This should be reflected in data on India's currency in circulation, an attractive indicator in that is simple, accurate, not subject to revision, and comes out on a weekly basis. You can download the data here under the section 'Reserve money'.

The chart below shows the number of rupee banknotes outstanding going back to 2001. Prior to the demonetization, cash had been growing at a rate of 14-15% per year, as illustrated by the blue trend line. Since then you can see that there has been a huge collapse in quantity outstanding as Indians queue to deposit their cash in the banking system. At the same time, the Reserve Bank of India (RBI) hasn't printed enough new 500 and 2000 rupee notes to meet demand. 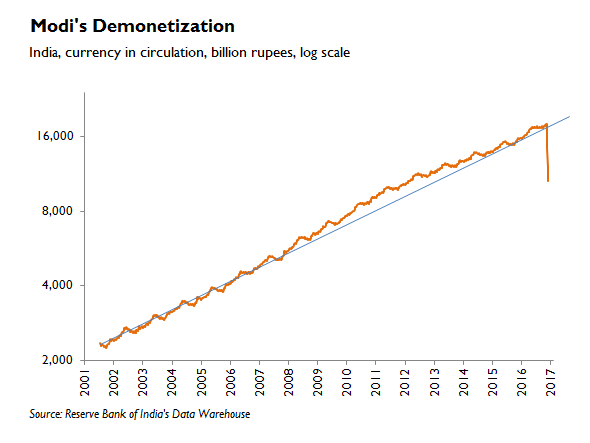 Cash in circulation will inevitably rebound in 2017 as the RBI catches up to demand by printing new rupees. If cash in circulation jumps back to the pre-demonetization level of ~18 trillion rupees and proceeds to readopt its growth path of 14-15%, than the demonetization will have failed to generate the desired effect. Despite suffering through queues and a relatively sluggish period of aggregate demand, Indians will have returned to their old habits, the whole demonetization campaign being a waste of time and effort.

But if cash in circulation only retraces part of the rebound, say rising to 16 trillion rupees by mid- 2017 (it is currently at ~10 trillion), and then sets out on a new and lower growth path (say 12-13%), then it will have achieved at least some of the desired effect. A new growth path starting from a lower level would imply that the demonetization has been successful in modifying the behaviour of licit cash users (i.e. converted them into digital money users) while driving illicit users of cash into the official economy.

My hunch is that of these two possibilities, the second is more likely: India will see a reduction in the growth path of rupee banknotes starting from a lower plateau. That being said, I find myself sharing many of the worries that Basu and other commentators have. Such a large and aggressive demonetization is a risky way to achieve the twin goals of broadening India's official economy and increase electronic money use. In order to catch people by surprise, much collateral damage must be inflicted, including time wasted in lineups and trades that go unconsummated due to a lack of cash (informal credit as in the case of Ireland not being able to completely fill the void). Suyash Rai makes a convincing argument that a demonetization of this size intrudes on property rights and rule of law.

Despite the chaos it has created, I still feel that the demonetization will make India at least a bit better off than before. However, other nations with large underground economies and low digital money uptake should be wary of copying India's example, waiting at least three or four years to gauge the final outcome. Rather than Modi's risky shock-and-awe approach, a better way to solve the problem is through a series of small and gradual measures. One of these steps might include implementing the approach Kaushik Basu writes about in his 2011 paper Why, for a Class of Bribes, the Act of Giving a Bribe should be Treated as Legal. See my post here for a full explanation.

Here's another incremental maneuver. Instead of imposing a short period of time for switching out of a limited quantity of 1000 and 500 rupee notes, why not allow three or four years for unlimited amounts of notes to be converted—but design the new notes to be 40% larger than the demonetized ones, as Peter Garber suggests, thus making it harder for Indians to store and handle cash?

Another step would be to copy Sweden which, thanks to several policies enacted over the last decade or so, is the only nation in the world with declining cash in circulation. One reason: retailers are required to use certified cash registers that prevent cash-induced tax gas. The Swedes have also adopted tax policies that encourage reporting of activities that typically remain in the unofficial economy, as I explain here. I also recently learnt from Miles Kimball that the Riksbank, Sweden's central bank, privatized the banknote distribution system in the 2000s, the effect being to end the subsidization of note transportation. If banks must bear the true (and higher) cost of moving notes around India, then this will be passed onto their customers, who in turn will react by switching into cheaper digital alternatives. I plan to write about this next week.

The advantage of many incremental steps towards increased digital money usage and a smaller underground economy is that should one step go bad, the blast radius will be small. One large Modi-style step might get you there faster, but if it goes awry, it risks upending the entire effort.
Posted by JP Koning at 12:12 AM