The world of monetary affairs in the 1920s and 30s: a complex affair

Bob Murphy asked whether Lionel Robbins was right in saying that central bank policy in the late 1920s and early 1930s was a complete reversal of traditional central bank doctrine.

A blogger named Lord Keynes, (perhaps the ghost of Keynes? ), takes exception to this idea, noting somewhat dramatically that Murphy is "dead wrong" and "utterly absurd". 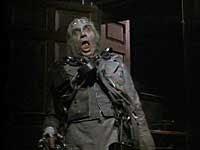 These sorts of us vs. them dramatics would be best left to the likes of professional sports casters (economic history is not a competition), but I'm going to look past the silly theatrics so as to delve into what is a very interesting issue.

The nub of the debate, in my view at least, boils down to the definition of traditional central banking doctrine. My conclusion, which I'll get around to explaining, is that compared to the 1800s, central bank policy between 1929-1932 was probably a complete reversal. But compared to Fed policy through most of the 1920s, the Fed's policy during the Depression was similar. One major categorical difference between 1923 and 1932 was the broad powers provided by the Glass Steagall Act. More on that later.

First, what is it that Lionel Robbins said? Here is a snippet:


Now in the pre-war business depression a very clear policy had been developed to deal with this situation. The maxim adopted by central banks for dealing with financial crises was to discount freely on good security, but to keep the rate of discount high. (Robbins, The Great Depression (pdf), Pg 72)

What Robbins is enunciating here is basically the classical advice of Walter Bagehot. In a crisis, central bankers should accept all collateral in return for loans, but should only do so at a penalty rate. (The latter is what Robbins is referring to when he says that a central bank must "keep the rate of discount high"). By penalty rate, Bagehot meant that central bank should only lend at some interest rate above the current market rate. In modern parlance, this is like saying that the central bank must force borrowers to take a haircut on their collateral.

A Bagehotian central bank is an extremely passive one. As a pure lender, it must wait for banks to come to it, as opposed to a buying central bank which can initiate transactions on its own behalf. Furthermore, a Bagehotian central bank can't influence banks to borrow at its discount window by lowering its own rate below the market's, since it must lend at a penalty rate. It can drop its rates to some low level, but only after the market has done so.

The sort of central banking that Robbins would contrast to the traditional Bagehot view is the post-WWI central banking practice that first arose in the US in the early 1920s. How was it different? Here, for instance, Allan Meltzer describes a New York Fed governor Benjamin Strong's position in 1921 on lending at a penalty rate:


He [Strong] believed the correct policy was to lend freely at a penalty rate, and he again cited Bagehot's rule. In July he continued to favor a penalty rate in principle, but recognized that the principle had to give way. He told [Montagu] Norman that money conditions "hardly justified.... making a further reduction." There were other considerations, however that made classical methods "not always the wisest," and he added, there were "political considerations brought about by the change of administration". History of the Federal Reserve, Vol 1, pg 125-126

By the early 1920s, due to a combination of factors, some of them political, others technical, the Fed had effectively stopped discounting at a penalty rate.

The idea behind Riefler-Burgess was that if the Fed embarked on a campaign of open market operations, member banks would have more reserves and could borrow less at the discount window. This would lower their borrowing costs and allow them to expand their lending, thereby buoying the economy. Rather than constantly varying discount rates, often a politically unpopular option, the Fed could simply engage in an activist open market sales/purchases program so as drive banks to, or pull banks away from the discount window, and thereby slow or spur on the economy. As Meltzer points out, discount rates now played second fiddle to open market operations:

The result of all this was that by 1923, the Federal Reserve was no longer Bagehotian. Rather than a passive wallflower that stepped in only rarely, it actively participated at all points in an economy's trajectory.

The upshot is that when Lionel Robbins describes the Federal Reserve open market purchases of $410m from October 1929 to December 1930 as breaking with tradition (pg. 73), he is right... since the tradition he is referring to is Bagehot's and not the more recent 1920s Riefler-Burgess tradition. At the same time, Lord Keynes isn't wrong to point out that Fed policy in the Great Depression was similar to Fed policy during the 1920s, insofar as they both relied heavily on open market operations.

As Lord Keynes points out in his post, there is certainly a quantitative difference between Fed policy in 1923 and 1932. See the chart below of Fed government bond holdings and bankers' acceptances, the former of which shows a terrific spike in 1932. In this post, I called the 1932 event QE0. The Fed was permitted to buy bankers' acceptances in the open market, but usually just set a fixed rate and let sellers come to it. 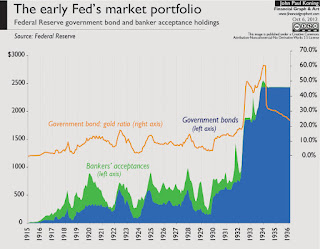 There is an important qualitative difference between 1923 and 1932. The difference is this. Before 1932, all Federal Reserve notes had to be backed 40% by gold and 60% by “eligible paper”. The latter was made up primarily of commercial paper. The passage of the Glass Steagall Act in February 1932 allowed government securities to be eligible, and therefore dramatically increased the ability of the Fed to engage in QE with government debt. Prior to then, the government could only engage in QE with government debt to the extent that it already had excess gold and eligible paper. It was constrained. The effects of this constraint, and its removal, is best seen in the chart by the orange line, which shows the Fed's government bond-to-gold ratio. Having never risen above 20%, the passage of Glass Steagall allowed the ratio to rise to  60% in 1934.