Paul Krugman has two posts discussing the effective lower bound to interest rates. The first I agree with, albeit with a caveat, and the other I don't.

In his first post Krugman takes Evan Soltas to task for including not only storage costs in his calculation of the effective lower bound, but also the extra convenience yield provided by deposits. Krugman's point is that once people are "saturated" with liquidity, as they seem to be now, then forgoing the liquidity of a short term marketable debt instrument (like a deposit) costs them nothing. If so, then the lower bound to nominal interest rates is solely a function of storage costs.

I agree with Krugman on this count. Take the 2 1/8% Nestle bond maturing May 29, which may be one of the first corporate bonds in history to trade at negative rates: 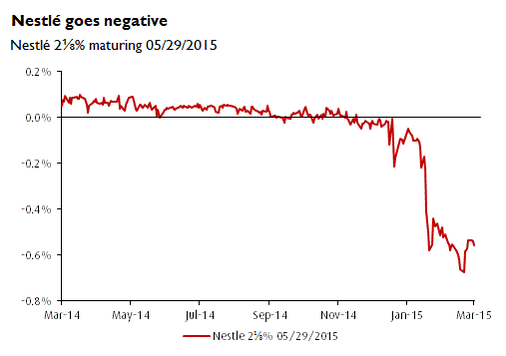 If it costs 0.50%/year to store and handle Swiss paper currency, then the rate on a Nestle bond can't fall below -0.50%. If it trades at -0.55%, an arbitrageur will contract to borrow the bond until it matures on May 29, sell it now, and convert the proceeds into 0% yielding SFr 1000 banknotes (these notes eventually being used to repay the bond lender). Our arbitrageur will incur 0.50%/year in storage costs while getting 0.55%/year from the bond lender, earning a risk-free return of 0.05%. Competition among arbitrageurs to harvest these gains will prevent Nestle's bond yield from falling much below storage costs.

However, here's the caveat. Krugman is assuming that liquidity is a homogeneous good. It could very well be that "different goods are differently liquid," as Steve Roth once eloquently said. The idea here is that the sort of conveniences provided by central bank reserves are different from the those provided by other liquid fixed income products like deposits, notes, and Nestle bonds. If so, then investors can be saturated with the sort of liquidity services provided by reserves (as they are now), but not saturated by the particular liquidity services provided by Nestle bonds and other fixed income products.

Assuming that  Nestle bonds are differently liquid than central bank francs, say because they play a special roll as collateral , then Soltas isn't out of line. Once investors have reached the saturation point in terms of central bank deposits, the effective lower bound to the Nestle bond isn't just a function of the cost of storing Swiss paper money, but also its unique conveniences.

This changes the arbitrage calculus. Our arbitrageur will now have to pay a fee to the lender of the Nestle bonds in order to compensate them for services forgone. Let's say the cost of borrowing the bond is 0.25%/year. Shorting the bond once it hits -0.55%, paying the borrowing cost of 0.25%, and storing the proceeds at a cost of 0.50% a year results in a loss of 0.20%. With the arbitrage being unprofitable, the Nestle bond can theoretically fall further than in our previous example before it hits the effective lower bound (specifically, its lower bound is now -0.75%).

How realistic is it that different goods are differently liquid? Since everybody seems to turn to Michael Woodford as the ultimate moderator of all questions monetary, here he is in his famous Jackson Hole paper [pdf] talking about the potential for different assets to have different types of convenience yields:


...one might suppose that Treasuries supply a convenience yield of a different sort than is provided by bank reserves, so that the fact that the liquidity premium for bank reserves has fallen to zero would not necessarily imply that there could not still be a positive safety premium for Treasuries.

Unfortunately, it's almost impossible to know for sure whether the liquidity services of a Nestle bond, or any other bond for that matter, are valued on the margin when people are already saturated in reserves. This is because there is no market for liquidity. If there was, then we could back out the specific price that investors are currently placing on a given bond's liquidity services, say by asking them to put a value on how much they need to be compensated if they are to forgo those services for a period of time. I've mentioned liquidity markets in many different posts. But I digress.

Krugman ends his first post saying that "I am pinching myself at the realization that this seemingly whimsical and arcane discussion is turning out to have real policy significance." But in his second post he backtracks, saying that a "minus x lower bound" isn't all that special in term of policy, implying that x (i.e. storage cost) is low and likely to diminish thanks to financial innovation. Here I disagree. Once a central bank has reduced rates to the point at which it is facing a run into paper storage, it can turn to a new tool to buy itself even more room to the downside for rate cuts: the manipulation of x, or the storage costs of cash.

To conclude, we've all found out by now that there isn't a zero lower bound. Instead it's a minus x lower bound. The next step is to realize that x isn't set in stone, it can itself be made into a tool of monetary policy.
Posted by JP Koning at 11:33 PM