Is the U.S. dollar in the midst of the longest Wile E. Coyote moment ever?


It would be wrong to blame the economics blogosphere's failure to foresee the 2008 credit crisis on complacency. Better to say that bloggers were distracted. Instead of sifting through sub-prime and CDO data, they were grappling with an entirely different threat, the impending Wile E. Coyote moment in the U.S. dollar. The perpetual racking-up of ever larger debts by the U.S. to the rest of the world for the sake of funding current consumption, and the eventual dollar collapse that this implied, was believed to be tripping point numero uno at the time. Look no further than Paul Krugman, who in September 2007 (in just his fourth blog post) had this to say:


The argument I and others have made is that the U.S. trade deficit is, fundamentally, not sustainable in the long run, which means that sooner or later the dollar has to decline a lot. But international investors have been buying U.S. bonds at real interest rates barely higher than those offered in euros or yen — in effect, they've been betting that the dollar won’t ever decline.

So, according to the story, one of these days there will be a Wile E. Coyote moment for the dollar: the moment when the cartoon character, who has run off a cliff, looks down and realizes that he’s standing on thin air – and plunges. In this case, investors suddenly realize that Stein’s Law applies — “If something cannot go on forever, it will stop” – and they realize they need to get out of dollars, causing the currency to plunge. Maybe the dollar’s Wile E. Coyote moment has arrived – although, again, I've been wrong about this so far.

He wasn't alone in this belief.* As we all know, the U.S. did eventually run off a cliff—but it wasn't the cliff that everyone expected. Instead of a dollar crisis, we had a financial and banking crisis. As for the dollar, it has since raced to its highest point in more than a decade.

Since 2008 the ensuing slow recovery has dominated the blogosphere. And now we are hearing about an impending secular stagnation, a new macroeconomic dystopia that has been manufactured by many of the same folks who contributed to the debate surrounding the econ blogosphere's first great macroeconomic bogeyman, U.S. dollar imbalances.

Before allowing the sec stag story to scare our pants off, shouldn't we be asking what happened to the first bogeyman? Given the econ blogosphere's silence on the topic of U.S. dollar imbalances, one could be forgiven for assuming that these imbalances had been resolved. But they haven't. Sure, the U.S.'s current account deficits aren't as high as before. But the stock measure of U.S. indebtedness, its net international investment position (NIIP), continues to fall to increasingly negative levels. Ten years ago, when bloggers were focused on the issue, the U.S. owed $2 trillion more than foreigners owed it, about 15-20% of GDP. The NIIP now clocks in at 39% of GDP, or $7 trillion. See chart below. So if anything, the stock measures that worried so many economists in 2005 have only gotten worse. 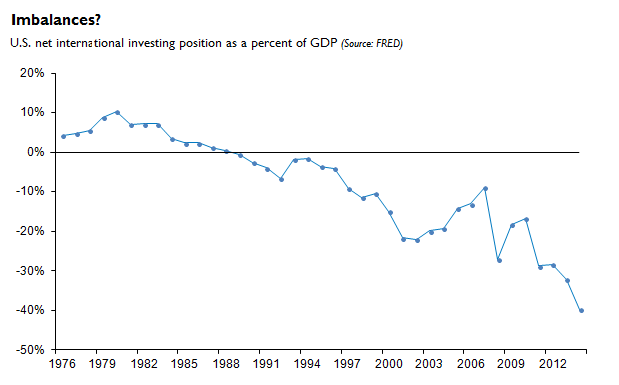 What I have troubles understanding is why folks like Larry Summers are having so much success selling the world on their newest bogeyman—secular stagnation—when they have never properly atoned for the bland ending to their first story. Why has growing U.S. international indebtedness never led to a U.S. dollar collapse as predicted? What mistakes did these prognosticators make? Or should we think of the the dollar's Wile E.Coyote moment as just an extended one—for the last ten years the greenback has been hanging in air, not realizing that it's been slated for a collapse.  Reading through old blog posts and articles written circa 2006, the dollar's blithe disregard of its eventual demise was often met by invocations of Stein's law: "If something cannot go on forever, it will stop" or Rudi Dornbusch’s first corollary of Stein’s Law: “Something that can’t go on forever, can go on much longer than you think it will.” It could be that the doomsayers still invoke these quotations, but surely there's a statute of limitations on invocations of Wile E. Coyote.

If the creators of the first bogeyman are just the victims of awful timing, then the net stock data on which they initially based their initial pessimism has only worsened. This means that they should be doubling down on their warnings of impending dollar doom. Instead, we get a steady stream of warnings over a totally different macroeconomic disaster; secular stagnation.

The other side to the story is that maybe we aren't in the midst of the longest Wile E. Coyote moment ever. Maybe the U.S. dollar bears were wrong about imbalances all along.

The fact that foreigners are willing to perpetually buy U.S. financial assets and fund a reckless U.S. consumption binge seems, on the surface, to be a violation of the eternal rule of quid pro quo—an even exchange of one thing for another. In return for a mere promise of distant consumption, Americans are getting valuable foreign labour and goods.

But what if something is missing to this story? Consider that a financial asset isn't a mere IOU. Rather, it is an IOU twinned with a durable consumption good. This very special good is called liquidity. Workers in the financial industry incur a significant amount of time and energy in fabricating this component. They expend this effort because people will pay good money to consume liquidity. Just like having a fire extinguisher or a revolver on hand provides a measure of relief, the possession of liquidity provides its owner with a stream of comfort.

Unfortunately, liquidity is never sold as a stand-alone product. Like a room with a view—you can't buy the view without also getting the room—people who want to own liquidity must simultaneously buy the attached financial asset.

It just so happens that the Yankees are the world's leading manufacturer of liquidity premia. This means that foreigners may be gobbling up such incredible amounts of American financial assets not because they have an urge for U.S. IOUs per se, but because they desire to consume the liquidity premia that go along with those IOUs. The U.S.'s NIIP, which is supposed to include only financial assets, is effectively being contaminated by consumption goods. Specifically, some portion of U.S.'s liabilities to the rest of the world is actually comprised of accumulated exports of liquidity premia. Rather than classifying these liquidity services as a stock of financial assets/liabilities, they should be reclassified as a flow of liquidity services and moved to the current account side of the U.S.'s balance of payments, along with the rest of the U.S.'s goods & services exports. This would have the effect of making the U.S.'s NIIP much less abysmal then it appears. Rather than Americans living beyond their means, this allows us to tell a story in which foreign goods and services are being bartered for liquidity premia which, like machines or wheat or apple pie, require the toil and sweat of American laborers to produce. This isn't an extravagant privilege, it's honest quid pro quo.**

We can argue about the size of the liquidity premia that the U.S. exports. On the one hand, these premia may outweigh the value of goods & services that the U.S. imports, indicating that rather than being profligate, Americans are tightwads. Or this number may be relatively small, indicating that while Americans are less spendthrift than is commonly assume, they still aren't models of prudence.

I'm not sure if the creators of the blogosphere's first great bogeyman would agree with any of this, since not only have they gone silent on the topic—they've switched to talking about a new bad guy.*** Interestingly, if exports of liquidity premia explain why the U.S.'s negative NIIP is not a catastrophe in the making but a stable equilibrium, those same liquidity premia can explain some of the stylized symptoms of so-called secular stagnation—namely persistently falling interest rates.

Liquidity is static, it interferes with many of the supposedly clear signals we get from data. If liquidity led economists astray in the last decade by creating what seemed to be ominously extreme dollar stock imbalances, it may be leading them astray this decade by creating what seem to be ominously low real interest rates. The last thing we want is a repeat of the previous decade in which economists missed out on the big one because they were so focused on what, in hind sight, seems to have been a bogus threat.


*Here is DeLong. It was one of Brad Setser's favorite topics. Non-bloggers including Rogoff and Summers also questioned the ability of the U.S. to generate perpetual current account deficits.
** The idea that the U.S. is exporting something unseen in the official data isn't a new idea. In this 2006 paper, Ricardo Hausmann and Federico Sturzenegger were one of the first to discuss the idea of "dark matter." This stuff is comprised of U.S. exports of expertise and knowledge, liquidity services, and insurance services. Ricardo and Hausmann believed that dark matter increased the value of U.S. assets held overseas, but it seems to me that dark matter, namely liquidity premia, does the opposite: it decreases the value of U.S. liabilities to foreigners.
*** At the time, Krugman, Setser, DeLong, and Hamilton criticized the dark matter idea. Buiter, publishing through Goldman Sachs, also criticized the idea here.