If you're like me and you like to: 1) explore anomalies in markets; and 2) mix equity analysis with monetary analysis, then you'll like this post. A sneak peak: by the end, we'll be able to use equity markets to figure out the unofficial exchange rate between a Greek euro and non-Greek euro.

For the last few weeks shares of Greek banks have diverged dramatically from their overlying depository receipts (see chart below). A bit of background first. A depository receipt is much like an exchange-traded fund, except where an ETF holds a bundle of different stocks, a depository receipt represents just one stock. That stock is usually listed on an out-of-the-way market (like Greece), whereas the depository receipt trades on a major exchange like New York. Investors interested in owning a foreign stock can avoid currency conversion costs and foreign settlement problems and instead purchase the New York-listed depository receipt hassle-free.

In general, the parent security and its offspring should trade in line with each other. Recently, however, the US-listed depository receipts of the National Bank of Greece and Alpha Bank have risen to a massive premium relative to their Greek-listed parents. For instance, in mid-August investors could have bought National Bank's New-York listed depository receipt for €0.73. However, the Greek-listed stock was trading for just €0.60. For some reason, investors are paying 30% more for a security that provides the exact same stream of earnings. We've got a gross violation of the law of one price.* 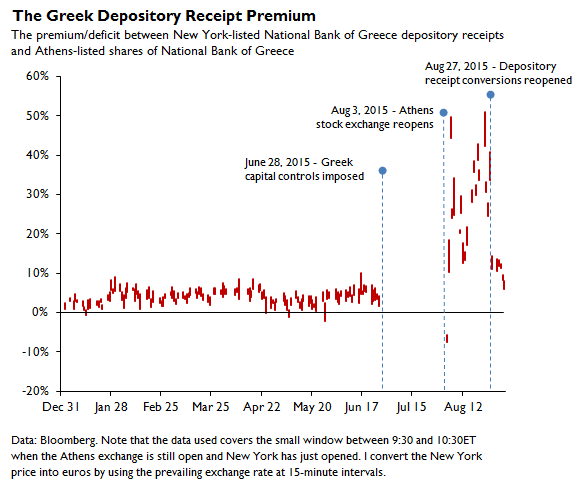 The effect is that as investors clamour to harvest arbitrage gains, any premium or discount between a New York-listed depository receipts and its Greek parent equity should quickly fall towards zero. Why hasn't this been the case in Greece of late?

Premiums or discounts can also occur when the redemption/creation mechanism is inhibited. Depository receipts for Taipei-listed Taiwan Semi Conductor rose to an incredible 60% premium to the shares in the late 1990s and early 2000s. The reason for this premium can be traced to the fact that Taiwan restricts foreign ownership of local companies. This effectively prevented the closing of the premium via purchases of local shares for conversion into depository receipts. These premia evaporated when Taiwan removed foreign ownership restrictions in 2003. (Here is a good summary).

In a 2006 paper, Saxena found that the New York-traded depository receipts of a handful of Indian stocks, including Infosys, Wipro, State Bank of India, MTNL, ICICI Bank, HDFC Bank and Satyam Computers, habitually traded at substantial premium to the underlying Indian-listed equity. Infosys's premium (which reached 60% in 2002) had existed since its U.S. listing in 1999. However, German, South Korean, and Hong Kong-listed companies with New York-listed depository receipts showed negligible premia.

In the case of Greece, the imposition of capital controls on June 29 seems to have inhibited the redemption/creation mechanism. The Athens stock exchange was closed the same day (the New York-listed receipts continued to trade), but when it reopened on August 3, capital controls remained in place. Since reopening, a wedge has appeared between the prices of National Bank of Greece's depository receipts and its underlying shares, implying that there has been much more demand for the former than the latter. Typically, arbitrageurs would close this gap, buying the underlying Athens-listed shares and turning them into new deposit receipts. Presumably the Greek authorities have asked that banking intermediaries cease allowing the conversion of Greek shares into receipts, so arbitrage has not been possible.

That ended on August 27, 2015. According to a press release for BNY Mellon, clarification requested from Greek authorities regarding conversions of depository receipts had finally been received and, as a result, deposit receipt books would be re-opened for issuance and cancellation. With the ability to arbitrage receipts and the underlying shares once again available, the National Bank of Greece depository receipt premium collapsed from around 30% to 10% when markets opened on August 28. It has been shrinking ever since and now lies within its historical range.

That explains the anomaly and its disappearance. But that's not the end of the story. Going forward, watching the relative price of National Bank of Greece's depository receipts and its share price may provide valuable insights.

In permitting depository receipt redemption and creation, the Greek government has effectively removed capital controls. Currently, Greeks cannot withdraw more than €420 in cash per week from their bank accounts and are not permitted to transfer more than €500 per month to a foreign account. Businesses must go through tedious application processes to get access to their funds. However, with the depository receipt window open, businesses and individuals can simply spend all their bank deposits on Athens-listed National Bank of Greece, convert the shares into depository receipts, sell them in New York for dollars, and convert the funds back to euros. Voila, capital controls evaded.

This loop hole doesn't seem very fair to me. After all, only the financial elite will be aware of the depository receipt escape, with widows, orphans, and the rest oblivious that capital controls have been effectively lifted. Loosening up the depository receipt window only make sense if it is twinned with similar effort to help the broad public, say a higher ceiling on cash withdrawals.

Depending how tightly Greece's capital controls bind, Athens-listed National Bank of Greece shares might actually lose their traditional discount and rise to a premium relative to New York-listed depository receipts (in euro terms). If depository receipts are the best route to evade capital controls, then those desperate to get their money out of Greece will be willing to pay a 'fee' for that privilege. By purchasing National Bank of Greece shares in Athens for, say 0.65 euro, and converting them into depository receipts that trade for just 0.60 euros, investors effectively lose 0.05 euros. The size of that fee, the premium, will equal the cost of the next best alternative for evading capital controls. If controls are leaky, the premium will be small. If they aren't, it could be quite wide.

A number of studies have found that during the Argentinean corralito, Buenos Aires-listed shares rose to a huge premium relative to their New York-listed depository receipts. Brechner, for instance, finds that the premium reached over 40% in January 2002. This gap represented the amount that Argentinians were willing to pay to use depository receipts as a vehicle for moving their wealth from frozen Argentinean bank deposits into liquid U.S bank deposits. When share conversions were restricted in March 2002, that premium disappeared.

Greece seems on its way to being mended. Capital controls should be loosened soon, and people no longer seem anxious about an imminent drachma conversion. So if a premium on local National Bank of Greece shares were to develop, I doubt it would be large like the sort of premia that prevailed in Argentina. However, if things were to get worse, we might see a large gap develop.