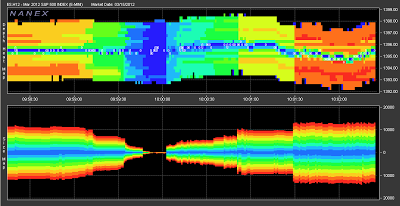 Much of the conversation about bitcoin adoption focuses on its use in goods and services transactions. Breaking bitcoin news, for instance, draws attention to the fact that the Internet Archive will be giving employees the option to be paid in bitcoin. This focus on brick & mortar transactions means that the role that bitcoin financial instruments—stocks, bonds, and derivatives—have to play in promoting bitcoin adoption often gets overshadowed.

I'm currently reading Barry Eichengreen's Exorbitant Privilege which goes into the mechanics of what it takes to create a truly international currency. Eichengreen points out that prior to World War I the dollar played a negligible role relative to the pound sterling in world markets, but by the mid 1920s it was the dominant unit for invoicing payments and denominating bonds. Eichengreen's theory is that the US dollar became the world's go-to currency because of the emergence of a very specific financial instrument—the banker's acceptance.

An acceptance is much like a bill of exchange, a financial instrument I explained in my last post. Say a merchant decides to pay for a shipment of goods with a personal IOU, or bill. If a bank first "accepts" the bill i.e. if it agrees to vouch for the IOU, then this gives the bill more credibility. It is now a banker's acceptance.

According to Eichengreen, around 1908 or 1909, a concerted effort to foster the growth of the US acceptance market began. Up till then, US banks had been prohibited from dealing in acceptances and branching abroad—both these limitations would be removed by new legislation. To promote liquidity and backstop the acceptance market, the Federal Reserve, established in 1914, was given authority to buy and sell acceptances via open market operations. Furthermore, these acceptances could legally "back", or collateralize, the Fed's note issue. This feature was particularly helpful. Although the Fed was also legally permitted to purchase government securities, government securities could not "back" the note issue. Acceptances, therefore, became the more flexible and preferred asset for Fed open market operations, at least until 1932 when the limitations on government collateral were removed. According to Eichengreen, the Fed was the largest investor in the acceptance market and sometimes held the majority of outstanding issues on its balance sheet.

What sort of financial deepening do we see in the bitcoin universe, and how might we compare it to the dollar's emergence in the 1910s and 20s?

There are a number of healthy signs of financial deepening. I count five competing bitcoin securities exchanges that provide a forum for trading bitcoin-denominated stocks and bonds. These include Cryptostocks, BTCT, MPEx, Havelock, and Picostocks. A sixth, LTC-Global, provides a market in litecoin securities, a competing altchain. Holders of bitcoin needn't cash out of the bitcoin universe in order to get a better return. Instead, they can buy a bond or a stock listed on any of these exchanges.

The largest publicly-traded company in the bitcoin universe is SatoshiDice, a bitcoin gambling website listed on MPEx. With 100 million shares outstanding and a price of 0.006 BTC, SatoshiDice's market cap is ~600,000 BTC which comes out to around $17 million. SatoshiDice IPOed last year at 0.0032 BTC. With bitcoin only trading at $12 back then (it is now worth $29), the entire company would have been worth $4 million. Given today's $17 million valuation, SatoshiDice shareholders have seen a nice return over a short amount of time—much of it provided by bitcoin appreciation.

While SatoshiDice certainly provides some depth to bitcoin financial markets it has the potential to shallow them out too. Because MPEx charges large fees to trade on its exchange, a few of the competing exchanges have created what are called SatoshiDice "passthroughs". Much like an ETF, a passthrough holds an underlying asset—in this case SatoshiDice shares on MPEx—and flows through all dividends earned to passthrough owners. As a result, investors can get exposure to SatoshiDice without having to pay MPEx's expensive fees. BTCT, for instance, lists two different SatoshiDice passthroughs (GSDPT and S.DICE-PT) which together account for more trading volume than all other stocks and bonds listed on BTCT.

SatoshiDice's sheer size is to some extent problematic since Bitcoin financial markets are not as deep as they might appear. Should something ever happen to SatoshiDice, a big part of the bitcoin financial universe's liquidity will be wiped out, and this would ripple out across the entire field of bitcoin securities. The same might have happened to banker's acceptances in their day, except for one difference—the Fed was willing to back the acceptance market up. In the bitcoin universe, there's no buyer of of last resort to provide liquidity support to SatoshiDice shareholders.

Another impediment to deeper bitcoin markets is the hazy legality of the bitcoin securities exchanges. The first major bitcoin securities exchange, GLBSE, was closed in October 2012 with no prior warning. According to this article, potential regulatory and tax liabilities convinced GLBSE's founder to shut it down on his own behest. If any of the existing bitcoin exchanges were to grow too noticeable, one could imagine the SEC (or its equivalent) knocking on their door and forcing the exchange-owner to pull the plug. This sort of regulatory uncertainty can only dampen the liquidity and depth of bitcoin financial markets.

US authorities, on the other hand, didn't need to heed the rules when they built the banker's acceptance market. They created the rules. If financial deepening in the Bitcoin universe is to proceed it will happen despite regulations and not because of them.

The last headwind to bitcoin financial deepening is bitcoin's volatility. Eichengreen writes that the seesawing of the pound sterling during the war period encouraged financial markets to search for a more stable unit in which to express debts. The pound had always been anchored to gold (or silver), but it was unpegged from its century's long gold tether when the war broke out. Although it was repegged in January 1916, this time to the dollar, this did not secure confidence in the sterling's value since the peg was dependent on American support. When this support was withdrawn at war's end, sterling fell by a third within a year. Through all of this, the dollar continued to be defined in terms of gold, a feature which no doubt attracted issuers.

Bitcoin, on the other hand, has more than doubled in just two months. Back in June 2011, it fell by 50% in just two days. Like pound sterling during the war, bitcoin's lack of stability will do little to promote deeper financial markets.

Although I've stressed the difficulties that bitcoin markets face in developing more depth, the sheer amount of financial innovation I'm seeing from those involved in the various bitcoin securities exchanges is impressive. I wish them the best. The more they build up bitcoin securities markets, the better an alternative bitcoin presents to competing currency units.


Disclaimer: I am long SatoshiDice and several bitcoin mining stocks.
Posted by JP Koning at 10:49 PM