Lars Christensen teaches me some interesting things about Japan and deflation in Did Japan have a “productivity norm”?

I notice that Paul Krugman has also chimed in on Japan, charting GDP per working age citizen rather than GDP so as to adjust for demographics.

*Update: Lars has responded to the Krugman post here, and includes another chart. As I pointed out in the comments, I am not entirely convinced by his chart because he computes it on a per capita basis, not a per worker basis. Krugman's chart measures the ratio of Japan's per worker GDP to that of the US, which is a more powerful way to visually tell the tale. Unfortunately the time axis's resolution is by the decade in Krugman's chart, which gives no granularity, and he only includes the US.

So I made my own chart. 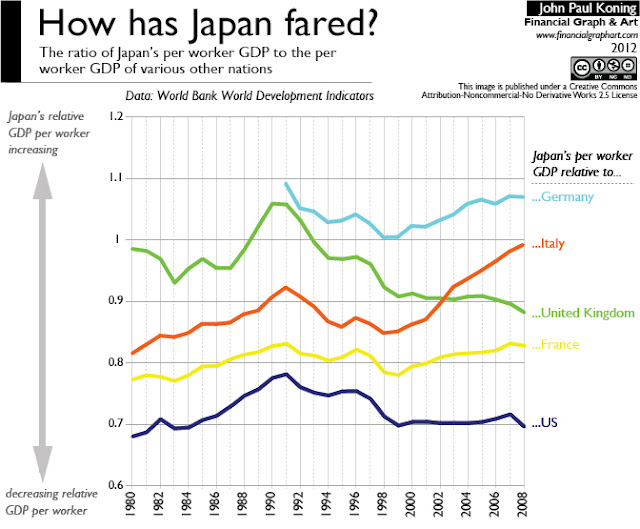 I think it's worth noting that, in regards to Lars's post, Japan's relative per worker GDP bottomed in 1999 and began to rise, which was before quantitative easing began in 2001.

As for Krugman, my chart doesn't show the same large rise in Japanese per worker GDP relative to the US in the 2000s that his chart shows. It was more of a pause. But I am using World Bank data, and Krugman is using something else. Note also how Japan has done far better than Germany, France, and Italy.

**Update: Krugman has another post, More On Japan (Wonkish).
Posted by JP Koning at 5:51 PM