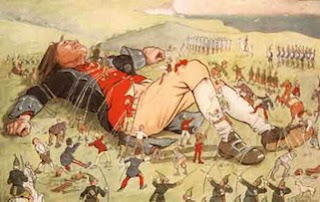 Like Guntram Wolff over at the Bruegel blog, I hope that the much-rumoured capital controls on Cypriot deposits don't get enacted. So far the Euro authorities seem to have done everything right, albeit in a slow and circuitous manner. Insolvent banks are being closed, uninsured depositors, unsecured creditors, and shareholders are being bailed in, and solvent banks are slated to reopen.

Wolff's main concern is that capital controls threaten the very meaning of a monetary union:


With capital restrictions, the value of a euro in Cyprus is no longer worth the same as a euro held by any other bank in the eurozone. A euro in Nicosia cannot be used to buy goods in Frankfurt without limits. Effectively, it means that a Cypriot euro is not a euro any more.

Enact capital controls and we'd see the emergence of an entirely new currency trading pair CYP€:onshore€, with Cypriot euros trading at a discount. The discount would emerge since the ability of CYP€ to buy things outside of the island of Cyprus is limited. It would be a less liquid euro than "mainland" euro, and therefore would get penalized with a liquidity discount.

A Eurosystem in which euros are heterogeneous would technically be workable. For an analogy, look at China. The Chinese yuan has several different prices. Mainland yuan (CNY) typically trades at a discount to yuan in Hong Kong(CNH) and yuan in Taiwan (CNT). I've cribbed a chart below that shows the spread. Chinese capital restrictions prevent arbitrage forces from reducing the gap. Foreigners would prefer to buy cheaper CNY than more expensive CNH and CNT, but they can't because restrictions on capital inflows into China prevent them from doing so. Chinese companies would like to borrow in Hong Kong rather than China since they'd be borrowing high-value CNH and repatriating it, thereby lowering their cost of funding. But capital outflows are also limited.*


Just like capital controls prevent the closing of the CNY-CNH spread, the introduction of European capital controls would lead to the emergence of the CYP€-€ spread. What are the dangers of Europe adopting a Chinese model of multiple prices for the same currency?

As Wolff points out, the Eurosystem already has a tool to deal with flight from banks: the ECB's incredibly powerful Target2 clearing system. When Cypriot banks reopen and depositors start to transfer deposits to Germany, Target2 will accommodate these flows by stepping between the two banking systems, simultaneously acting as a creditor to Cyprus and a debtor to Germany. Like any lender of last resort, Target2 will be vigorous in lending, providing whatever assistance is required to Cypriot banks facing liquidity shortfalls.**

The great thing about Target2 is that its mere presence has the ability to prevent a bank run from ever being kick-started. If Cypriot depositors know at the outset that the incredibly powerful Target2 will accommodate their fears, why should they be fearful? Target2 is like Chuck Norris, as Nick Rowe and Lars Christensen would say. Its mere presence is enough to create powerful self-fulfilling counter-effects.

Cyprus wants to soften potential deposit flight with capital controls rather than leaving Target2 to do all the work. One wonders if these controls would help at all. Controls are porous, and investors will find cunning ways to get around them.

Worse is the precedent this sets. If capital controls are used as a substitute for Target2, the Euro risks losing a major stabilizing force come the next crisis. Say that it is 2016 and doubts spring up concerning Finland's banking system. If Finnish depositors know that Target2 will accommodate all deposit outflows from solvent Finnish banks, then they realize that they have nothing to fear, and the panic will subside on its own accord. But if Finnish depositors think that Cyprus-style capital controls will be put in place to prevent deposit outflows, the panic will only be exacerbated as people try to withdraw money from Finland before capital controls cause FIN€ to trade at a discount. Anyone who gets through the gate before it closes can't lose, so everyone tries to get through the gate. This effect is perverse, since the very rumour of capital controls leads to their actual adoption. With capital controls, a European bank panic is self-fulfilling—with Target2, that same panic is self-correcting.

Leave Target2 free to be the regulator of European liquidity flows—don't use capital controls. Haven't we already learnt this lesson? It was Draghi's speech about Euro convertibility from last summer that helped reduce yield spreads and stop the intra-European bank run. Gavyn Davies read that speech as a reaffirmation of unlimited Target2 power, and so did I.*** Never shackle Target2.
_______________________

* The Chinese are moving to less capital controls. Spreads are already declining, and at some point the CNY-CNH/CNT differential will be no more.

*** See this comment as well as my first Never Shackle Target2 post.
Posted by JP Koning at 2:26 PM