A rush for US paper dollars: the rejuvenation of the world's most popular brand 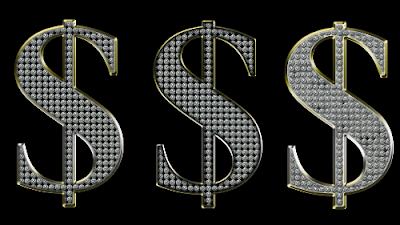 Here are Paul Krugman and James Hamilton on the renewed demand for dollar bills.

So what's behind the soaring demand for US paper dollars? A simple strategy for getting a grasp on US data is to compare it to the equivalent in Canada. Comparisons between Canada and the US serve as ideal natural experiments since both of us have similar customs and geographies. By controlling for a whole range of possible factors we can tease out the defining ones.

The chart below shows the demand for Canadian paper dollars and US paper dollars over time. To make visual comparison easier, I've normalized the two series so we start at 10 in 1984. On top of each series I've overlayed an exponential trendline based on the 1984-2006 period. I've zoomed in on 1997 for no other reason than to provide a higher resolution image of the typical shape of cash demand over a year.

1. Not a huge surprise, but the demand for US paper has been accelerating far faster than the demand for Canadian paper. As James Hamilton points out, this is no doubt due to the huge transactional demand for US dollars overseas. The emerging countries in which US paper is demanded often have high growth rates, and their requirement for transaction media is correspondingly elevated. Unlike greenbacks, Canadian loonies are only demanded in Canada. As a slow-growth country, we don't require rapidly expanding amounts of physical transactions media.

3. There are some neat patterns in the chart. No, not all cash is demanded by criminals. There's always a cash spike at Christmas/New Years, and if you look carefully you can see jumps in Canadian cash demand coincide with major holidays, including Thanksgiving and the September long weekend. As Lenin once said, give me data on your nation's money supply and I can tell you when its holidays are. And note the huge Y2K-inspired rush to hold paper. Cash is still the ultimate medium for coping with raw uncertainty.

4. US paper demand started to slacken relative to trend in the early 2000s. One might be tempted to blame technological advances or changes in US preferences over payment media for slowing demand. Cash is a dinosaur, right? But this can't be the case. Canadians benefit from the same technologies as the US, nor do payment preferences change when one moves from 50 miles south of the 49th parallel to 50 kilometres north of it. If technology or preferences had changes, then Canadian cash demand would have deteriorated too, but as the chart shows, it continued to rise on trend. The best explanation for the US dollar's divergence from its long term growth just as Canada hewed to its trend is that foreign demand for US paper began to decline.

It's a reasonable explanation. Around 2002, the value of the US dollar begin a long and steady deterioration against most of the world's currencies, in particular the euro. It's very probable that consumers of the US$ brand punished the brand owner, the Federal Reserve, by returning dollars enmasse to their source, thus reducing the supply of paper dollars (or at least reducing its rate of increase). As incontrovertible proof, I submit exhibit A—a 2007 video of Jay-Z flashing euros instead of dollars (skip to 0:51).


5. So it seems to me that from 2003-2008 there was a mini run on the Fed by overseas cash holders. What Jaz-Z doesn't show is the process by which US dollars would have refluxed back to the US. Euroization, or de-dollarization, goes like this. A foreigner goes to their local bank to trade US dollars for euros. The local bank, flush with dollars, puts this paper on a plane for redeposit at their US correspondent bank in New York. The New York bank, which now has too much vault cash, loads these dollars into a Brinks truck and sends them to the New York Fed. And the FRBNY shreds the notes up.

The lesson being, when folks like Jambo in Zimbabwe and Julio in Panama get distraught about the quality of their Ben Franklins, the effects of their unhappiness will be felt, with some delay, all the way back at the Fed's open market desk.

6. US paper demand has since rebounded. Paul Krugman posts a chart that shows a massive accumulation of US cash holdings relative to GDP beginning in 2008. But Krugman's chart overstates the effect by constricting his time frame. As my chart shows, the rate of growth in US paper has only returned to the trend it demonstrated in previous decades.

Krugman attributes this increase in dollar holdings to the fact that the US is in a liquidity trap. When rates are near zero, people have no problems holding zero-yielding cash. I'm not so sure about his explanation. Canada had incredibly low rates for a few years, yet as our chart shows, Canadian paper never budged from its trendline growth. The same goes for the Euro. Rates have been low there, but we haven't seen a flight into paper money. Because cash is inconvenient and bulky, rates have to go pretty far below zero before people flee to paper.

No, the more likely explanation for the rebound in the US paper outstanding is the rejuvenation of the US dollar brand. The ECB has had to deal with waves of negative publicity for the last few years. Given the alternatives, the world wants to hold Benjamins again. This seems to be borne out in the chart below, which shows the ratio of ECB-to-Fed banknotes in circulation.

The US dollar, it would seem, is back. Cash holdings are only one sign off a currency's hegemony. It would be telling if there's also been a rebound in the use of the dollar to denominate bonds and other debt instruments, as well as increased holdings of US dollar-denominated assets in the reserves of major central banks. The US's "exorbitant privilege", as Barry Eichengreen calls it, continues apace.


Note: As I was writing this, I stumbled on a paper by Ruth Judson via James Hamilton called Crisis and Calm: Demand for U.S. Currency at Home and Abroad from the Fall of the Berlin Wall to 2011. And what do you know. She uses Canada as a foil for determining US cash demand, just like I did. I haven't read it yet, but am quite looking forward to doing so and am willing to yack about it in the comments.