Production of the European Central Bank's €500 notes is scheduled to come to an end later this year. But a chart of the quantity of €500 banknotes in circulation (see below) reveals something odd. The supply of €500s began to plummet way back in early 2016, long before note production was supposed to be halted. What gives?

It was back on May 4, 2016 that the ECB officially announced that it would stop printing and issuing the €500 note, one of the world's most valuable banknotes ranked by purchasing power. The reason it gave was concerns that the €500 "could facilitate illicit activities." You may remember that this was in the midst of ex-banker Peter Sands screed against high denomination notes, echoed by economist Larry Summers and later amplified by Ken Rogoff's book The Curse of Cash.

While the €500 is undoubtedly popular with organized crime, there is some evidence that regular people use €500s, as Larry White points out here. In the recently published survey on the use of cash by households in the euro area, 19% of respondents reported having a €200 or €500 in their possession in the previous year. A quarter of respondents held banknotes (they don't specify the denomination) as a precautionary reserve, with 12% of these reporting a stash greater than €1000. So that means that around 3% of Europeans keep a large hoard of notes under their mattresses. This presumably gives the €500 a role to play as a store of value. After all, hiding thirty €500s under the bed is more convenient than three-hundred €50s.

But concerns over illicit usage of the €500 won out. Issuance of new €500s is set to stop near the end of 2018, although after that date people will be free to continue holding existing €500s as a store of value or to buy things. Any note deposited in the banking system after that point will be sent to the ECB to be destroyed. With no new supply and a steady removal of existing €500 notes, the quantity outstanding after 2018 will steadily shrink.

Below, I've charted out the total value of euro high denomination banknotes in circulation. 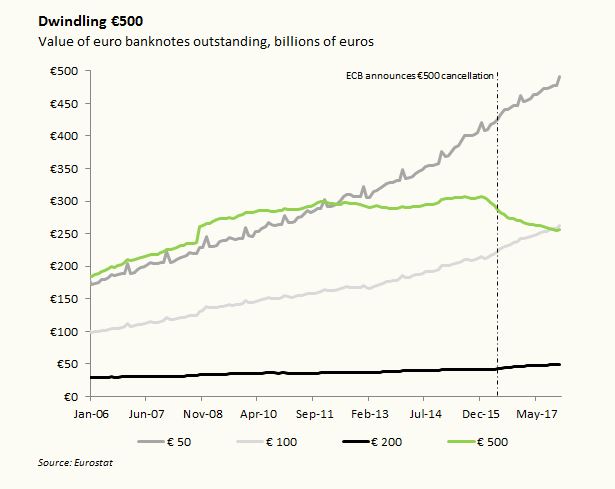 Although the €500 has eight or nine months left before this deadline is reached, the supply has already fallen by around €50 billion from its peak level of €300 billion outstanding in January 2016. Has the ECB jumped the gun and already kiboshed the €500 without telling anyone?

Luckily, the ECB provides incredibly fine-grained data on banknotes. Not only can we get the total value of banknotes in circulation, but also the monthly flow of banknotes issued by the ECB to private banks and returned by private banks. I've charted these flows below. 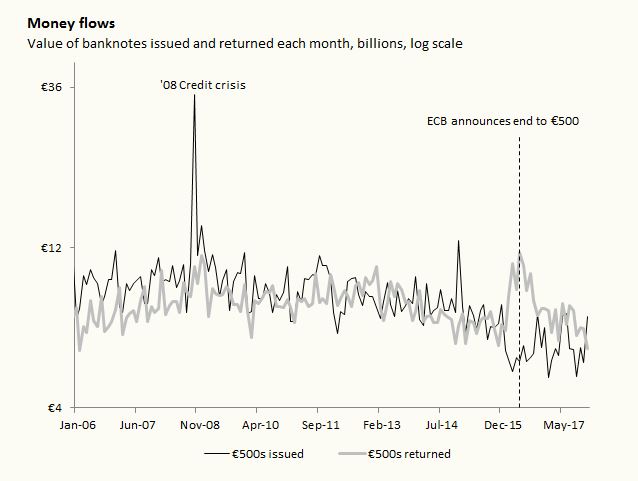 No, the ECB has not jumped the gun. It continues to issue several billion euros worth of €500s each month (the black line). But whereas issuance tended to exceed note returns in the past—the result being growth in the total stock of €500s in circulation—the tables have turned and note returns (the grey line) have generally exceeded issuance since early 2016, and thus the stock has dwindled. So the observed decline in the supply of €500s is entirely the result of the public's preference to have less of them.

This highlights an important point that I often mention on this blog. One of the most popular motifs of central banks is that they print cash willy nilly, forcing it onto an unsuspecting and virginal economy. This wildly misses the mark. Central banks do not push banknotes into the economy. Rather, the public pulls banknotes out of the central bank into the economy and pushes them back to the central bank. Each month Europeans return whatever quantity of €500s they don't want to the banking system, commercial banks in turn forwarding this currency to the ECB. Others withdraw whatever amounts of €500s they desire from their bank accounts, private banks in turn calling on the ECB to provide sufficient €500s. The net effect is an increase or decrease in the total stock of €500 banknotes in circulation. The ECB itself has no direct control over the public's decision to build or diminish the total supply of €500s.

I suspect that the relatively large increase in €500 note returns since 2016 is due to worries of an aggressive demonetization. As the second chart shows, returns of €500s began to accelerate in February and March 2016, well before the May 2016 announcement date. At the time, hints of the €500's imminent demise were being leaked to the press. Now, imagine that you are the head accountant at a large criminal organization with multiple suitcases full of €500s. You are hearing rumours that something is about to be done to the €500 note. The worst case scenario is that the note is to be suddenly cancelled—or demonetized—by the ECB, the period for converting €500s into €100s and €200s limited to a harrying few weeks. If the conversion window is being monitored by the authorities, your organization's attempts to convert €500s into smaller denominations might be flagged for further inspection.

Given this scenario, you'd want to change your suitcases full of €500s into €100 and €200s as fast as possible, before the actual announcement hits. Otherwise your organization might end up forfeiting a large chunk of the value of those notes—and you might be fired, literally. So my guess is that the rumours surrounding the fate of the €500 probably caused a mini "banknote run" in the months prior to the May announcement. Even after the ECB assuaged worries about an aggressive demonetization by promising to exchange €500s for an unlimited period of time, note returns have remained high relative to issuance. This suggests that the underground market still has worries about a potential aggressive demonetization, and are shifting into safer alternatives.

Once the ECB stops issuing €500s at the end of this year, the pull-push mechanism I described above will cease to function. There are two ways to set monetary policy. The first way—the one that regulates all banknotes including the €500—is to fix the price and let the quantity fluctuate as the public pulls what it needs and pushes back what it doesn't. The other policy is to fix the quantity and let the price fluctuate. This is the policy governing assets like gold, or the S&P 500, or bitcoin.

After 2018 the ECB will have switched from fixing the price of €500s to fixing their quantity. At that point, the price will become a floating one determined by public demand, just like gold or bitcoin or the S&P 500. The higher the public's demand for €500s, the more its price will rise relative to pegged banknotes like the €100. A few years from now, it might take six or seven €100s to buy one €500.
Posted by JP Koning at 7:41 AM