Anthony Pompliano, or Pomp, is at it again. Some of you may recall his odd claims about bitcoin adoption in Argentina, which I took apart here. Well, the following tweet wandered onto my twitter stream a couple of days ago. 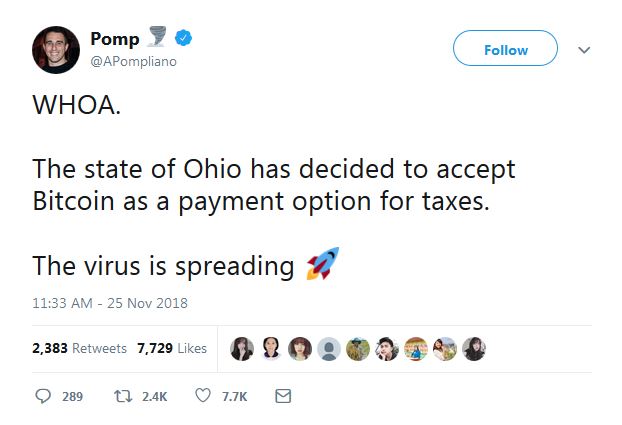 For more, here is the Wall Street Journal.

So let's get this straight. The Ohio state government is not accepting bitcoin as payment for taxes. Rather, it is sponsoring a gateway that allows business owners to offload their bitcoins on the market in the moments prior to tax settlement. Now that actual dollars having been obtained, the tax obligation can now be settled. Take a look at the FAQ at ohiocrypto.com.


"At no point will the Treasurer’s office hold cryptocurrency. Payments made on OhioCrypto.com, through our third party cryptocurrency payment processor partner BitPay, are immediately converted to USD before being deposited into a state account."

Here's an example of how this might work. Let's say an Ohio business owner has to pay $10,000 in taxes. By logging into ohiocrypto.com, she can sell $10,000 worth of bitcoins to a payments processor called BitPay. BitPay in turn quickly sells those bitcoins for the requisite amount of dollars on a bitcoin exchange like Coinbase, and then forwards the $10,000 (in fiat) to the State of Ohio. Dollars, not bitcoins, are being accepted for taxes.

Ohio's announcement is not a big deal, certainly not one deserving of a WHOA. In addition to bitcoin, there are all sorts of assets that we taxpayers can offload in the moments before settling our tax bill. Once we know how much we owe, we can sell an appropriate amount of Tesla shares, then forward the dollar proceeds to the state. This sort of at-the-last-second sale is exactly what is happening with ohiocrypto.com, except an intermediary—BitPay—has been introduced to expedite the final step. We can do the same with gold, or silver, or property. Heck, using Pomp's definition we can even pay our taxes with an old IKEA sofa. Quickly sell the sofa at a low price on kijiji, deposit the cash, then settle the tax bill with an ACH payment to the government. The whole process won't take longer than 45 minutes.We don't even need to pay an intermediary like BitPay to process it.

The sad thing is that ohiocrypto.com is a big waste of taxpayer funds. Only a handful of businesses are ever going to use it. Say that our Ohio business owner has some dollars in her bank account as well as some bitcoin. She owes the state $10,000. According to the FAQ, the fee for going the Bitcoin route is 1%, which means she'll pay a fee of $100. Meanwhile, an ACH payment is free. Unless she has some sort of soft spot for paying with bitcoin, a quick and simple calculation means the she will never opt to use ohiocrypto.com, preferring to use old-fashioned but free ACH.

I'm being generous with my example. I've assumed that our business owner already happens to have enough bitcoin on hand to send her payment to ohiocrypto.com. But if she doesn't (which is likely to be the case), then that only multiplies the unlikelihood of her ever going via Ohio's new bitcoin route. To fund her $10,000 payment to ohiocrypto.com, she'll first have to endure the hassle and expense of acquiring enough bitcoins ahead of time. Given that she must still incur BitPay's 1% fee to settle her taxes, its hard to imagine her ever bothering to embark on such a costly chain of transactions.

Don't blame BitPay for the high fee. It charges 1% because dealing in bitcoin is a nuisance. Not only must BitPay recoup the trading costs that it incurs by selling our business women's $10,000 worth of bitcoins (both commission and slippage), but in the time between accepting her submission and making the trade it must cope with bitcoin's volatility. BitPay is just trying to get by.

Why is Ohio going through with this project? Ohio Treasurer Josh Mandel, who is behind the effort, has this to say: "Around 2014, I developed an interest in crypto and now I consider myself a crypto enthusiast." Right. This project seems more to me like a fanboy's devotion to the cause than a genuine attempt to help the Ohioan taxpayer.

Back to Pomp. To end his tweet, he proclaims that the "virus is spreading." Not at all. A well-designed payment option will literally drag people in because it is so incredibly useful. This ain't it, Pomp. Not only is Ohio not accepting bitcoins (no doubt they are too volatile), but it is unlikely that Ohio businesses will adopt ohiocrypto.com. Ten years into Satoshi Nakamoto's payments experiment, it still hasn't succeeded in pulling in mainstream payees and payors. Let's face it. Bitcoin is just not that great of a payments system.


...which isn't to say that bitcoin hasn't been successful. What Nakamoto didn't realize at the time is that he wasn't creating decentralized cash. Rather, he was creating what would eventually become one of the world's most popular decentralized financial games. Bitcoin is in the same category as the lottery or poker, not Visa or cash. If you think about bitcoin this way, you'll see why it is silly to set up payments gateways like ohiocrypto.com. If you were to offer someone the opportunity to buy $1 worth of goods with a $1 lottery ticket, they'd laugh at you. To a lottery player, their lottery ticket is their potential salvation, their route to becoming a millionaire. To use it to buy stuff would be sacrilegious. The same goes for bitcoin. People don't want to waste their prized bitcoins on buying stuff or making tax payments. No, their bitcoins are their ticket to riches.
Posted by JP Koning at 6:01 PM