A nickel is worth more than a nickel

Having just emerged from the fiasco of last year's coin shortage (which I wrote about here and here), the U.S. Mint has a new problem on its hands. The melt value of the nickel, or five cent coin, has suddenly moved higher than the coin's face value.

Thanks to the big rally in copper prices, a nickel coin is once again worth more than 5¢ https://t.co/2ZEkkxqEVR pic.twitter.com/2O2ce0eccN

As you can see, the last time that the intrinsic value of a coin exceeded its face value was ten years ago, back in 2011. Thanks to the huge rally in copper prices over the last twelve months, the metallic content of a nickel is currently worth 5.9 cents. In theory, anyone can buy nickels for five cents, melt them down, sell the copper and nickel for 5.9 cents, and earn 0.9 cent profit less costs. 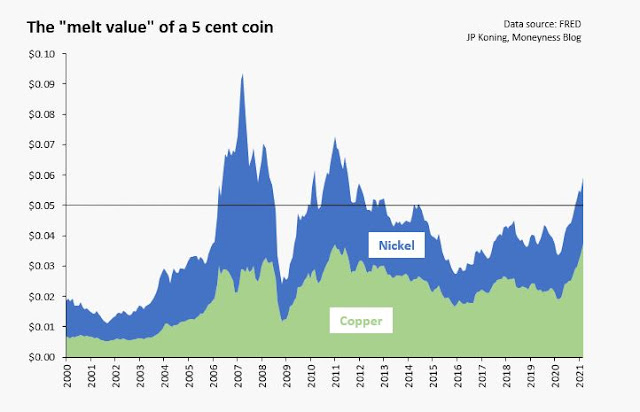 But this trade isn't without its risks. Since 2006, the U.S. Mint has made it illegal to melt down U.S. one-cent and five-cent coins. Rule-breakers can get up to five years in jail. A would-be entrepreneur might try exporting U.S. nickels to Canada to melt them down. But the U.S. Mint anticipated this loophole and also made it illegal to export coins in amounts exceeding $5.

These sorts of punishments might reduce melting. But they are unlikely to stop melting altogether.

The price of copper has risen over the last year, but the price of nickel hasn't matched it. If nickel prices were to rise too and the melt value of a five-cent coin were to hit, say, 8 or 9 cents, then the financial incentive to break anti-melting laws would become quite strong. Cue the problem of coin shortages. If a coin is more valuable for its metal content than as money, it'll quickly disappear from circulation.

Shortages arising from illegal melting would be exacerbated by legal nickel hoarding by speculators. Kyle Bass, for instance, once made a $1 million nickel bet that I wrote about here. Expect many Kyle Basses to emerge out of the woodwork as commodity prices rise.

Careful readers will recognize this as an instance of Gresham's law. When a monetary instrument's value is fixed by the authority, but its intrinsic value is above the amount, then all of this "good" money will be withdrawn from circulation.

We've been fighting this problem for hundreds of years and have devised a pretty standard fix. The Mint needs to quickly reduce the metallic value of the nickel. For instance, the U.S. was plagued by shortages of silver quarters in the 1950 and '60s as people hoarded them for their silver content. The solution was to replace silver quarters with cheaper copper ones. (I wrote about these wise debasements here.)

Take another example. In 1982, the high price of copper forced the U.S. Mint to swap its 95% copper penny for a 97.5% zinc penny. Zinc is cheaper than copper. To this day, the melt value of a U.S. penny remains quite a bit below its face value, as the chart below illustrates. (The only exception is a few months in 2007 when high zinc prices pushed a penny up to 1.1¢.) If the U.S. Mint hadn't made the switch from copper to zinc in 1982, then the melt-value of pennies would currently be around 2.5¢, and everyone would be melting them down. 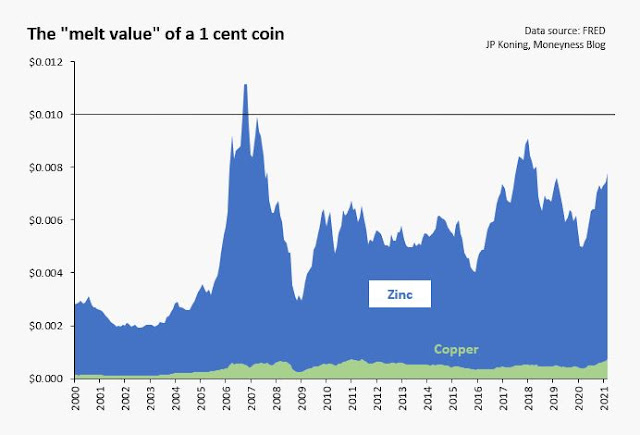 So moving back to 2021, one the U.S. Mint's option to combat hoarding and melting of nickels is a zinc nickel. A steel nickel is another possibility – back in 2000 we Canadians switched our five-cent coins from a nickel/copper mix over to 94.5% steel.

Sure, there would be some hassles. Vending machines often read a coin’s electromagnetic signature to determine its denomination. A move to steel coinage would require the vending machine industry to make significant changes to its coin-reading apparatuses.

But compared to enduring constant shortages, a switch is a far better idea.

Or here's another option. Why not use the occasion of high commodity prices to get rid of both the one-cent and five-cent coins altogether? These coins are little more than monetary pollution. We don't need them anymore.