Here is Facebook's David Marcus, who has been involved in rolling out Facebook's much-touted Libra/Novi/Diem payments system:

I often make the parallel between money and communication networks. Unfortunately money still moves at the pace of the early 70s (ACH), and for the most part at the same price. Unacceptable. https://t.co/beNCtCD3To

By ACH, Marcus is referring to automated clearinghouse payments. If you want to pay your phone bill, the payment gets sent to a clearing house, which batches your payment together with many other payments and then settles it the next day. These systems were built in the 60s and 70s.

I don't want to pick on Marcus, since he isn't the only one with this view. But modern money no longer moves at the pace of early 70s ACH. His critique would have made sense maybe 6 or 7 years ago, and only in the US. But that's not the case in 2021.

The speeding up of modern payments is a great success story. Let me tell you a bit about it.

The speed of these new platforms get passed on to the public by banks and fintechs, which are themselves connected to these core systems. In the UK's case, for example, consumers can bypass the slower ACH system, BACS, which takes three days to settle, by choosing to make their bank payment proceed via the Faster Payments system.

The U.S. is lagging. The Federal Reserve's FedNow retail payment system, which will facilitate real-time retail payments, won't be in place till 2024, more than 15 years after UK's Faster Payments was introduced. So Marcus's tweet could just be a function of having a U.S.-centric viewpoint.

However, the Fed's private competitor, The Clearing House, has had a real-time settlement system in place since 2017, the Real-Time Payments (RTP) network. Roll-out has been slow, but as of July 2021 The Clearing House claims that RTP reaches 56% of U.S. checking accounts.

The US is inching towards ubiquitous instant P2P payments. Here is the coverage map for the US's only real-time retail payments settlement system, The Clearing House's RTP network, introduced in 2017.

RTP illustrates that it's not just central banks that are facilitating real-time payments. Private players are too. Visa and MasterCard, for instance, built their own proprietary real-time person-to-person payments platforms, Visa Direct and MasterCard Send, on the back of their debit card networks.

As Arturo Portilla points out, Visa Direct and MasterCard Send don't actually settle payments in real-time. They only clear them. From the perspective of the consumer, however, it makes little difference. Ned can send Jenny $100 using a Visa Direct enabled account, and Jenny can then spend that $100 within moments of receiving it. (Ned and Jenny's banks settle up the next day.)

In 2017 U.S. banks debuted Zelle, a now ubiquitous instant person-to-person bank payments option. Zelle was built using the Visa Direct and MasterCard Send networks. And now Zelle is being connected to The Clearing House's RTP network, too. Which means that settlement can be done in real-time.

Remittance companies like Western Union and MoneyGram are leveraging Visa Direct and MasterCard Send to do instant cross-border transfers. As of late 2020, Western Union was facilitating real-time payouts to 80 countries. MoneyGram recently announced that 575 corridors from 25 countries in Europe would go instant thanks to an integration with Visa Direct, complementing its existing instant payments options from the US.

Remember when everyone was poking fun at Western Union for its slow remittances? It now does real-time payouts in 80 countries, up from 50 earlier this spring, and is targeting 100 countries by the end of 2020: https://t.co/oSiihGCwvs pic.twitter.com/ovRKZMMH8y

Transferwise, another global remittance company, is dispatching up to 38% of its remittances instantly. Whereas Western Union and MoneyGram are building on top of Visa Direct and MasterCard Send, my understanding is that most of Transferwise's success in speeding up remittances comes from integrating with the new retail real-time payments systems I listed above, like Singapore's FAST and UK's Faster Payments.

Let's not forget SWIFT gpi, which is bringing a new speed standard to corporate cross-border payments.

Even the ACH network that Marcus criticizes is upping its game. ACH payments have typically not settled till a day or two after origination, which meant consumers have had to wait for salaries and bill payments to settle. But in 2017, same-day ACH was introduced. It's taken some time for this option to gain adoption. As of the first quarter of 2021, only 2% of all ACH transactions are done on a same-day basis. 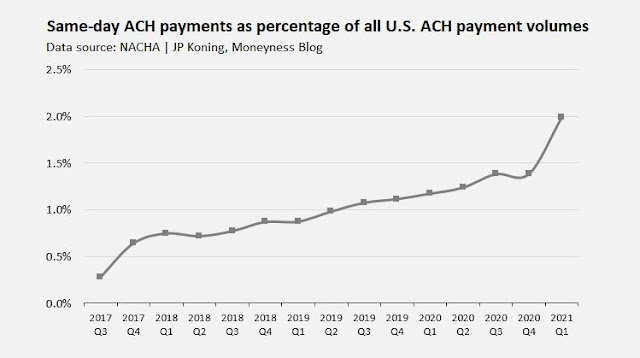 Lastly, Marcus maligns slow in his tweet. But remember, slow can be a good thing, too. Slowing down transactions allows us to batch them together and cancel out reciprocating payments, thus reducing the amount of work our payments systems must do. And this makes our payments systems cheaper. (I've written two articles on this topic, here and here.)

The ideal payments ecosystem isn't slow or fast. It provides a combination of slow, medium, and fast options. The Libra/Diem/Novi project project that David Marcus is working on will fit in somewhere on this spectrum. The more options, the better off are consumers. But 70s ACH is no longer a very realistic way to describe modern money.