Tether vs the New York stablecoins

The safest ones are the New York stablecoins: Paxos Dollar, Gemini Dollar, and Binance USD (BUSD). The New York stablecoins are issued by financial institutions supervised by the New York Department of Financial Services. Measures such as segregation, bankruptcy remoteness, and a trust company structure are used to protect customers funds. Customer money is invested in low-risk securities such as short-term U.S. government debt.

The risky stablecoins – best represented by BVI-based Tether – invest customer funds in higher-risk instruments like long-term commercial debt, loans to affiliates, or cryptocurrencies. They do not have clear protections for customers should an adverse event occur, nor do they have a regulator looking over their shoulder to make sure that they are running their stablecoin operations in a robust manner.

[For a more complete description of the differences between the New York stablecoins and other stablecoins, see my post here.] 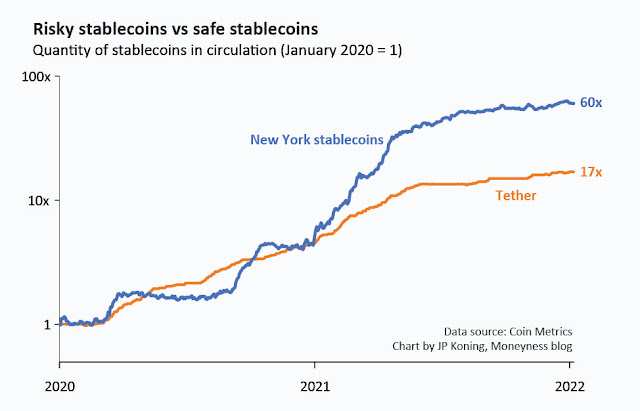 Riskier assets should always offer investors a higher interest rate than safer assets. Interest is the extra carrot that we get for incurring financial danger. But interest doesn't exist in the world of stablecoins. That is, the risky stablecoins and the safe ones all pay holders the same 0% rate. Given the absence of a reward for bearing risk, one would expect a reverse Gresham's law effect to kick in: the community of stablecoin holders should gravitate to the safest stablecoins, the good money displacing the bad.

However, as the second chart below indicates, Tether still remains the largest stablecoin... by far. There are around $80 billion in outstanding Tethers circulating through the cryptoeconomy compared to $16 billion in New York stablecoins. This suggests to me that more stablecoin rationalization will occur. 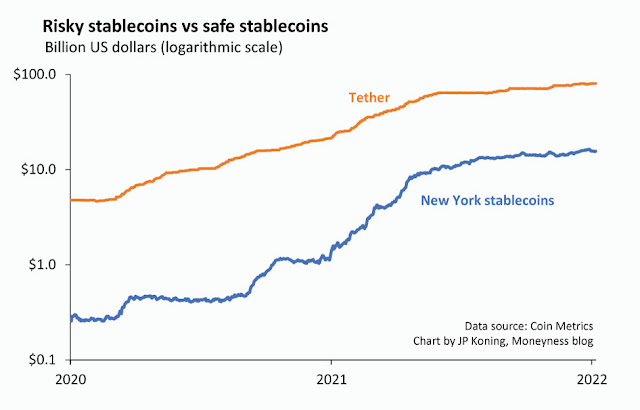 Why is this reverse-Gresham process proceeding so slowly?

Tether has been around since 2014. The New York stablecoins didn't arrive until 2018. In that interim period of Tether dominance, a Tether standard of sorts emerged. Given a lone stablecoin option, the cryptoeconomy built up a dependence on Tether. Like any standard, once everyone is plugged in it's hard to shift to a superior standard.

But just because it is difficult to switch standards doesn't mean it won't happen. Over the long term, there is no reason for the community of stablecoin users to continue using the riskiest 0%-yielding stablecoin. Either everyone will shift away from Tether, or Tether will be forced to adapt by becoming just as safe as the New York stablecoins, or Tether will start to pay interest in order to compensate for being the riskiest product.