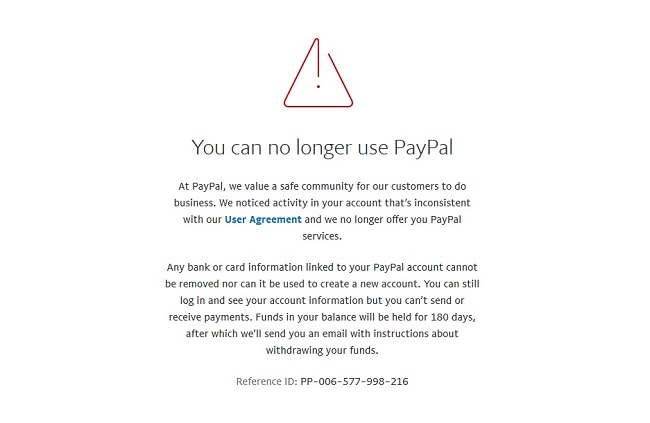 If you ever glance through the acceptable use policies or terms of service of consumer-facing payments company like PayPal or GoFundMe, you'll see that they have incredibly long and stifling lists of prohibited activities. Why would these companies willingly turn away legitimate business?

There are a bunch of reasons, but here are three important ones:

1) Some customers are a nuissance. Their businesses may suffer from high rates of payments fraud and/or frequent chargebacks, which means that it may not be to expensive for a payments company to connect them.
2) The products that some businesses sell are semi-legal (i.e. marijuana) or potentially illegal (libelous publications), and so it's too risky to connect them.
3) Some businesses engage in activity that is legal but potentially controversial (like white supremacist lit or sex toys). The payments company that connects them could look bad, which means potentially losing customers, shareholders, or employees.

This is a pretty sensible set of reasons for prohibiting certain activities from your payments platform. However, if you're a businesses that has been barred by a processor, you'll certainly be upset, and understandably so. Payments are vital to any enterprise. Having as many competitors to choose from is important. To boot, being suddenly cut off is a pain; you'll need to scramble for an alternative.

When a payments firm enacts a new prohibition on a certain type of businesses, this in turn feeds into the political arena. In return for votes and funding, political actors offer support to particular companies and business lobbies. When their constituents are suddenly prevented from accessing a certain payments platform, these political agents loudly broadcast their displeasure. And so the acceptable use policies of companies like PayPal have become incredibly politicized documents. Progressives bellow when sex workers are cut off from PayPal. Republicans howl when firearms are disallowed.

Case in point was the massive push back against PayPal which earlier this month updated its acceptable use policy to prohibit "misinformation." I've screenshotted the update below, with the changes being entirely confined to section 5. PayPal already fines customers $2,500 for engaging in prohibited activities such as selling cigarettes, hate literature, and items that are considered obscene. With this new update, PayPal would now be prohibiting anyone from using its platform to engage in fake news and would extend its existing $2,500 fine to infringers. [An archived copy of the policy update is available here.]

PayPal executives probably had good business reasons for wanting to prohibit misinformation from their platform. Last month conspiracy theorist Alex Jones was ordered by a judge to pay almost a billion dollars to his victims for fabricating fake news about them. With numbers as big as that being bandied around, lawyers at payments company have to be wary that they too could be pursued by the victims of misinformation for facilitating the disinformation attacks of their customers.

Not only that, but associating with a bad actor like Alex Jones could hurt the reputations of consumer-facing payments companies, leading to customers bolting.

Long story short, the legal, financial, and reputational risks of having fake news artists as customers are just too high for mainstream firm like PayPal, and thus the prohibition on misinformation was introduced into its acceptable use policy page.

But acceptable usage policies have become politicized, and so PayPal's move led to all sorts of outrage. Republicans were furious. Senators Bill Hagerty, Cynthia Lummis, Pat Toomey, and others expressing their "deep concern" in a letter to PayPal, subsequently broadcast across social media. A big chunk of the internet's many misinformation artists are their misinformation artists, after all, and need to be protected.

This week I joined @SenThomTillis and other Senate Republican colleagues in sending a letter to the President & CEO of PayPal. We are demanding answers on the most recent policy change that would financially punish consumers over “misinformation.” Our letter: pic.twitter.com/rzjO8n4VyW


Meanwhile, commentators like Glen Greenwald were upset by what they see as a PayPal attempt at "punishing dissidents in the West through exclusion from the financial system." Which I don't think is the right way to process the event. PayPal is a business. It doesn't refuse to serve a certain set of customers because of an ideology requiring it to punish "dissent from neoliberal orthodoxies." PayPal chooses to stop serving clients because it believes that this would reduce its income, adjusted for risk. While some "dissenters" are too risky for PayPal to serve, many dissenters aren't—and probably make for fine customers.

Greenwald's reliance on the word "banishment" also betrays a misunderstanding of how payments work. PayPal is a low-risk payments processor, not a high-risk one. There are other payments companies that do specialize in serving a riskier clientele. These firms will compete to reconnect the fake news sites that PayPal has decided to offboard. In short, there is no such thing as payments banishment.

In response to the push back, PayPal said that it would not be adding the misinformation clause to its acceptable use policy after all. (It actually said that the update was an error, but that sounds unlikely.)

And again, you can see why it made a business decision to change its tune. The move had made some of its existing rule-abiding customers unhappy, and they threatened to close their acconts. PayPal wants to drop bad customers, but not at the expense of losing the good ones.

This is interesting because it shows how a business decision gets ingested by the political machine, the resulting output being fed back into PayPal's business decision making process, leading to a 180 degree turn.

Nor did things end there. With acceptable use policies having become a key political battleground, and politics loves controversy, the fake news mill – the very targets of PayPal's misinformation clause – kicked into high gear. Across the internet, articles began to pop up alleging that PayPal's rescinded misinformation clause and associated $2500 penalty had been stealthily "added back into the terms of service with equally ambiguous language," as one article put it.

A quick check of PayPal's acceptable use policy in the WayBack Machine shows that these claims aren't factual. Agree or not with the $2500 fine, it wasn't added back after "criticism on social media died down." The fine has been there since it was tacked on by PayPal back in September 2021.

The fake facts continued to pile up. PayPal has a long-existing rule against lying about account details like your name and age. A second article erroneously tries to claim that this longstanding rule is a new one, more specifically that it is the "misinformation" clause sneakily reintroduced back into PayPal's list of acceptable uses. It's a silly argument that I rebutted more fully on Twitter.

So no, the controversial rescinded misinformation clause has not been quietly added back to PayPal's acceptable use policy. But the facts don't necessarily matter. This wave of fake news successfully fed back into the political arena, with folks like Republican representative Tom Emmer seizing on them to air his worries that PayPal is being "weaponized to control speech." There are existing users of PayPal, the ones that PayPal would like to keep, who will listen to Emmer and close their accounts.

The whole series of events illustrates how complicated it is for a company to modify its terms of services.

Firms want to boost their profits, which means establishing policies to reach a certain type of desirable client while excluding other types of clients that don't fall within their targeted market. But firms also need to try and calculate how their proposed changes will be digested in the political arena, and how the resulting outrage feeds back into the decisions of their desirable clients, who might choose to leave.

And firms must also consider the third degree of complexity: how the political controversy over their  policy changes gets respun by fake news sites, the resulting sausage being imported back to the political arena for additional consumption, more outrage, and (potentially) more client departures. It's a difficult nut to crack. I wouldn't want to be PayPal, or its lawyers, the next time it comes time to update its acceptable use policy.