Do credit-induced asset price bubbles show up in GDP? 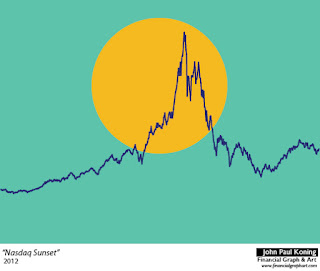 Having read Larry White's book on free banking (pdf) and a number of George Selgin's papers I consider myself to be an advocate of free banking. That being said, I can't help but wonder about a few of George's recent points in his post on Intermediate Spending Booms, the most recent in a series of posts that trains a critical eye on market monetarists. Here is George:


But in seeking to free monetary theory and policy from the Keynesian overemphasis on interest rates, the Market Monetarists tend to downplay the extent to which central banks can cause or aggravate unsustainable asset price movements by means of policies that drive interest rates away from their "natural" values. Such distortions can be significant even when they don’t involve exceptionally rapid growth in nominal income, because measures of nominal income, including nominal GDP, do not measure financial activity or activity at early stages of production.

George is saying that nominal GDP might not properly capture the effects of a central bank setting its rates below the natural rate because it doesn't measure a few key variables, namely financial activity and early-stage investment projects. This sounds somewhat like a rechristening of the classic Austrian complaint against traditional measures of inflation. Here, for instance, is an article by Bob Murphy talking about how relatively tepid changes in CPI might mask credit-induced asset bubbles.

As I pointed out in my comment on George's blog, GDP calculations include investment, presumably much of which is in the early stages of production. GDP also includes inventories. Bill Woolsey describes this better than I can.

As for changes in financial activity due to excess credit, I think GDP should capture it pretty quickly. The next little bit is just a paraphrasing of Fritz Machlup's The Stock Market, Credit, and Capital (pdf). Machlup wrote it to counter claims that the stock market was capable of "tying up capital". It's a great read.

Say artificially low interest rates convince a speculator to borrow from a bank in order to fund the purchase of a stock. When the transaction is completed the speculator owns the stock. On the opposite side of the transaction, the seller of the stock has been freed of her position and owns cash. She in turn can do two  things with this cash. First, she might buy goods. This will immediately show up in GDP. Alternatively, she can buy another stock, in which case a third person now owns the cash. This third person can in turn either buy goods, which registers in GDP, or purchase new stock from a fourth person. This fourth person can.... you get the point. The process proceeds fairly quickly until someone in the chain purchases a good, thereby allowing GDP to capture the effect of excess credit.*

Another factor limiting the ability of long chains of stock transaction to tie up capital is that the longer the chain continues, the more likely stock prices are to be bid up. At higher prices, firms are more willing to finance themselves by issuing new shares since their cost of capital has fallen. This is because they can raise more today than the day before while issuing the same amount of shares. When firms issue new shares they drain the purchasing power originally created by excess credit creation out of the market and invest it in new capital. This allows GDP to ultimately capture the effect.

So a decline in market rates below the natural rate will result in more credit, and this credit could very well be used to purchase stocks, and this will put upward pressure on prices. But just as quickly as credit is used to buy stocks, purchasing power is released from the stock market as the sellers of stocks use the proceeds to buy real goods. GDP measures will capture the effect. I think this process happens fairly quickly given the agileness of financial markets. Maybe George thinks these chains can persist for some time.

One interesting side note. Say that the purchasing power created by excess lending exits the stock market when someone in the chain purchases used goods, say an old couch. Second hand goods transactions are not included in GDP calculations. So in this case, the effects of excess credit might not show up in GDP. It's for this reason that Nick Rowe  prefers the value of total transactions ( P x T) to nominal GDP (P x Y) as his choice indicator. Incidentally, George too invokes the idea that measures of transactions might be better indicators of monetary conditions than income measures:

It would seem then that market monetarists like Nick Rowe and Selgin do have some things in common.

*There is a third thing that can be done with the cash. It can be held. But if people do this, then the issuing bank never issued excess credit in the first place. Sufficient demand already existed in the economy for bank liquidity and this is expressed by the fact that people willingly decide to hold those newly created deposits.
Posted by JP Koning at 7:38 PM