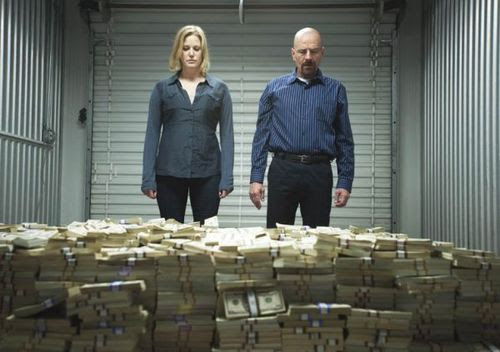 Tyler Cowen and Scott Sumner discuss the idea of abolishing central bank-issued cash. The existence of cash can create problems for monetary policy. Say a central bank wants to reduce the rate it pays on central bank deposits to below zero. If it did so, everyone would immediately convert deposits into cash, since owning 0% yielding paper notes is better than owning an instrument that pays a penalty rate. There appears to be a zero-lower bound to the interest rate on deposits. Ban cash and you might remove that bound.

Tyler points out that the alternative to an outright ban is to put a Silvio Gesell-style tax on cash that brings a bank note's yield to something below 0%. This way, no one will prefer cash to negative yielding deposits. But as he points out, this is slightly "goofy" since it requires serial numbers and scans on all paper notes.

There is a simple alternative that doesn't require a ban, nor does it require that all cash carry sensors, serial numbers, or whatnot. Instead, the central bank can reduce the convenience of cash by constricting the denominations of currency it issues. The Federal Reserve currently prints notes in denominations of $1, $5, $10, $20, $50 and $100. Say that the Fed reduces the rate it pays on deposits to -2%. Households, small businesses, large corporations, and banks flock to turn in all their deposits for bills. The kicker is, the Fed will only provide them with cash in $5s.

This imposes a real burden on people because it is more expensive to hold $5s than it is $100s. Banks keep their cash in vaults, but these vaults have been designed to store thousands of $100s, not hundreds of thousands of $5s. Given this inconvenience, deposit holders will be less willing to flee -2% interest rates by moving to cash. Gone is the zero-lower bound problem.

I pointed out here that one problem with this policy is that the entire cash-using sector, particular criminals, might Euroize. Rather than hold, say, thirty US$5 bills, or US$150 in -2% deposits people might choose to hold one €100 bill. This decline in the dollar's "brand" would in turn hurt seignorage earned by the Fed.

In any case, the core issue here is how to reduce the attractiveness of central bank liabilities in a world in which central banks issue two types - cash and deposits. Reducing interest rates on deposits below 0% works only as long as you simultaneously hurt the convenience of cash by doing something like only issuing $5s (or putting a Gesell tax on cash). Alternatively,one can reduce the attractiveness of both notes and deposits in one fell swoop by doing what Scott Sumner advocates: promise to reduce the future purchasing power of all central bank liabilities. I'm on the fence about policy implications of all of this. I'm a macroeconomic agnostic, for the time being at least. But I think the zero-low bound problem is probably an over-exaggerated problem.

Updates: Bill Woolsey has an excellent post on this debate. Other things that can be done to avoid the zero-lower bound apart from taxing or banning cash include ceasing redemptions of deposits for cash. Banks can threaten holders of cash to deposit it now or deposit it later at a discount. Bill also notes that if the quality of bank notes is reduced by making them junior claims on bank assets, then senior claims like deposits can easily yield negative amounts without causing a rush to cash.
Posted by JP Koning at 7:40 PM