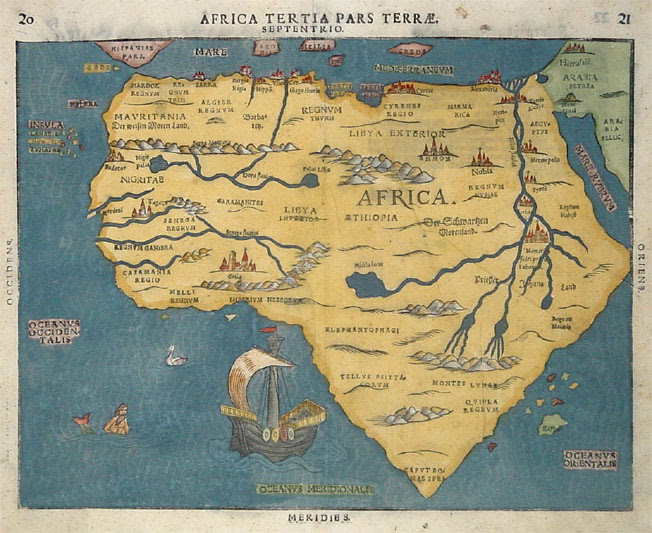 Economists are sometimes guilty of misrepresenting real-world liquid objects as living examples of the abstract variables populating their favorite monetary model. A good example of this is the incorrect reliance on Yap stones to illustrate the idea of fiat money by economists as varying as Keynes, Milton Friedman and James Tobin. Whereas fiat money is intrinsically useless, inconvertible, and unbacked, Yap stones certainly aren't, the anthropological evidence revealing that the stones had cultural and religious significance apart from their monetary value.

Similar in concept is the story of the macute, a unit of account used in Angola hundreds of years ago. Much like the exotic Yap stone, the existence of the macute (or macoute) came to the attention of Western thinkers as trade and conquest revealed ever large parts of the globe. Montesquieu was one of the first to describe the macute, noting:


The negroes on the coast of Africa have a sign of value without money. It is a sign merely ideal, founded on the degree of esteem which they fix in their minds for all merchandise, in proportion to the need they have of it. A certain commodity or merchandise is worth three macoutes; another, six macoutes; another, ten macoutes; that is, as if they said simply three, six, and ten. The price is formed by a comparison of all merchandise with each other. They have therefore no particular money; but each kind of' merchandise is money to the other. - Montesquieu, Esprit des Lois, 1748

Montesquieu's macute was later picked up by Sir James Steuart, an 18th century economist ranked just a notch or two below Adam Smith:


That money, therefore, which constantly preserves an equal value, which poises itself, as it were, in a just equilibrium between the fluctuating proportion of the value of things, is the only permanent and equal scale, by which value can be measured.

Of this kind of money, and of the possibility of establishing it, we have two examples: the first, among one of the most knowing; the second, among the most ignorant nations of the world. The Bank of Amsterdam presents us with the one, the coast of Angola with the other.

The second example is found among the savages upon the African coast of Angola, where there is no real money known. The inhabitants there reckon by macoutes; and in some places this denomination is subdivided into decimals, called pieces. One macoute is equal to ten pieces. This is just a scale of equal parts for estimating the trucks they make. If a sheep, e. g. be worth 10, an ox may be worth 40, and a handful of gold dust 1000. - An Inquiry into the Principles of Political Oeconomy, 1767

To Steuart and Montesquieu, the macute was an example of "ideal" money of account. The term money-of-account refers to the economy's pricing sign, or unit-of-account. It could be pounds (£), yen (¥), or dollars ($). Some real good typically defines this unit. For instance, the $ is the unit used to record prices in the US. The real good that defines the $ is base money issued by the Federal Reserve. In medieval times, prices were recorded in terms of £/s/d, with silver pennies being the defining real item (the "link coin"). To put this in the lingo of the econ blogosphere, the real good that defines the unit of account is the medium of account, a term popularized by Scott Sumner.

James Steuart's ideal money of account was a unit that, somewhat unusually, had no underlying real good defining it. It was a purely abstract accounting unit. There were prices in Steuart's economy, but no medium of account. Presumably Angolans were to keep the macute scale in mind, much like they might have a good sense for how long a foot was, or how much liquid a litre might contain. But at least with litres or feet there was a standard to which one might refer back to, say a metre stick or a measuring cup. Since the macute had no physical representation, goes the theory, it could only ever exist in people's heads.

Steuart and many others in his day believed in the necessity of an invariable scale of value. What was important to Steuart was the relative prices of real goods, not the price of some superfluous intervening good who's only job was to provide a measuring stick. If the money-of-account was a gold coin, for instance, then the "smallest particle of either metal added to, or taken away from any coin" would cause the entire price level to rise, destroying the ability of coins to measure the value of things. This would create macroeconomic difficulties:


any thing which troubles or perplexes the ascertaining these changes of proportion by the means of a general, determinate and invariable scale, must be hurtful to trade, and a clog upon alienation. This trouble and perplexity is the infallible consequence of every vice in the policy of money or of coin.

Fixing the money of account to a coin rather than allowing it to have an independent and abstract value caused distributional unfairness, since the relative interests of debtors and creditors were now at the disposal of anyone who could reduce the quality of coin,


not only of workmen in the mint, of Jews who deal in money, of clippers and washers of coin, but they are also entirely at the mercy of Princes, who have the right of coinage, and who have frequently also the right of raising or debasing the standard of the coin, according as they find it most for their present and temporary interest.

To those like Steuart, the advantage to society of an imaginary accounting unit like the macute was that, unlike physical coin, no prince or money clipper could ever debase it. It existed safely in the collective imagination where it could not be damaged, and therefore trade would no longer be held hostage to a fluctuating price level.

This idea spread. Around the time of Steuart, A.R.J. Turgot would also write of the macute as a purely imaginary unit:


The Mandingo negroes, who carry on a trade for gold dust with the Arabian merchants, bring all their commodities to a fictitious scale, which both parties call macutes, so that they tell the merchants they will give so many macutes in gold. They value thus in macutes the merchandize they receive; and bargain with the merchants upon that valuation. - Reflections, 1766

Macutes-as-ideal-unit would go on to be upheld a century later by John Stuart Mill:


This advantage of having a common language in which values may be expressed, is, even by itself, so important, that some such mode of expressing and computing them would probably be used even if a pound or a shilling did not express any real thing, but a mere unit of calculation. It is said that there are African tribes in which this somewhat artificial contrivance actually prevails. They calculate the value of things in a sort of money of account, called macutes. They say one thing is worth ten macutes, another fifteen, another twenty. There is no real thing called a macute: it is a conventional unit, for the more convenient comparison of things with one another. - Principles of Political Economy, 1848

As lovely as the idea of an imaginary macute was, it simply wasn't true. The macute was not so abstract as Montesquieu, Steuart, Turgot, and Mill would have liked it to be. William Stanley Jevons, for instance, scolded Montesquieu for misunderstanding the nature of money of account, since macutes served as "the name for a definite, though probably a variable, number of cowry shells, the number being at one time 2000." Lord Lauderdale accused Steuart of ignorance, noting that macutes were "pieces of net-work, used by the people of Angola for a covering." Like Lauderdale, John Ramsay McCulloch also found macutes to be bits of valuable cloth. Other writers declared that slaves were the missing medium-of-account used to describe the macute.

With the benefit of modern ethnographic accounts, we know that McCulloch and Lauderdale were right—macutes were neither imaginary, nor slaves, nor cowries, but cloth. In Power, Cloth and Currency on the Loango Coast, Phyllis Martin describes a coastal economy in which domestically produced cloth currency circulated. These libongo (pl. mbongo) were fourteen inch square pieces of cloth about the size of a hankerchief (see photo below). Mbongo had multiple uses. Not only could it be used in local markets to buy food and other consumption goods, but it could be made into clothes, wall hangings, bags, and floor coverings, and used for ceremonial purposes.


Martin also describes a traditional unit of account called a makuta (macute), defined as ten mbongo wrapped together in a strip. European trade brought foreign substitute cloth, and with that a decline in the purchasing power of the makuta, or inflation, resulted. As a result, copper coins came into increased use, although Martin finds that mbongo remained in circulation well into the eighteenth century. By the 1700s, around the time that Montesquieu was writing, the nature of the makuta unit of account had changed:


At Loango Bay traders used an abstract numerical unit of account based on a makuta, one mukuta being equal to 10. The unit may have developed from the older association of the mukuta with ten mbongo. Thus a slave-trader at Loango in 1701 wrote, "we bought men slaves from 3,600-4,000, and women, boys and girls in proportion." The goods to be exchanged were also valued in the numerical unit of account for example, a piece of "blue baft" or cotton cloth from India counted as 1,000, a piece of painted calico was 600, a small keg of powder was 300, and a gun was 300.40

- Martin, Power, Cloth and Currency on the Loango Coast, 1986

What we have here is an example of "ghost money", not ideal money. An ideal money, having been divorced from any traded good, would have no commodity definition whatsoever. The mukuta (macoute) as described by Martin, however, was defined as a historically fixed, or "ghost" quantity, of mbongo. Though no longer prized as a highly liquid medium of exchange—copper coinage would have filled this place—mbongo were still desired for their non-monetary qualities. Thus any alteration in the real value of mbongo would continue to have an effect on all prices. It may have been this historically fixed "ghost" nature of macutes and their relative rarity in actual trade that confused Montesquieu into describing them as an ideal accounting unit.

In sum, macutes were not the ideal unit of Steuart and Montesquieu's imagination. Does that mean that ideal units of account can't exist? I'm hard pressed to come up with a logical explanation for how they might work. And I surely don't have any historical examples, the macute having been confined to the dustbin. I vote we toss the idea out, along with fiat money. Beware economists toting imaginary accounting units, abstract numeraires, and ideal money of account.

P.S. Indexed units of account like the Chilean Unidad do Fomento, which I wrote about here, are not imaginary units. Instead, I think they should be thought of as ghost monies.
Posted by JP Koning at 4:35 PM