Riding on the coattails of Sergey Brin and Larry Page...or not

How much is a corporate vote worth? To answer this question, look no further than behemoth Google. One of Google's voting share costs $779, around 1.7% more than a non-voting share at $764.

Why has a "voting premium" emerged in Google shares? How might the shape of this premium evolve?

A bit of background first. The public can invest in one of two Google share classes: Class A shares, listed as GOOGL, or Class C shares, listed as GOOG. Class A shareholders benefit from one vote per share whereas Class C shareholders get no vote. Because a vote is the only difference between the two classes, we can infer that the Class A premium represents the value that investors attach to voting power. The total market cap ascribed to the 288 million or so Class A votes is $4.3 billion. (Note that Google has been recently renamed Alphabet).

I've mapped out the history the Class A voting premium below: 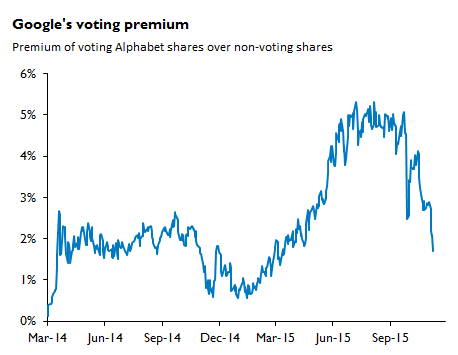 It just so happens that Canada, my home and native land, provides plenty of fodder for understanding Google's odd capital structure. For decades wealthy Canadian families have been using dual share class structures to simultaneously get access to capital markets while retaining control of the family firm. Sell the public non-voting shares (or single voting shares) and retain the voting class (or multiple voting). Think of the Bombardier family, the Desmarais clan (Power Corp), or the Billes bunch (Canadian Tire).

Large gaps, or voting premia, have often developed between the price of Canadian-listed voting and non-voting stock. Case in point is the differential between Rogers Communications' non-voting and multiple voting shares, controlled by the Rogers family, which has averaged around 5% going back to 2000: 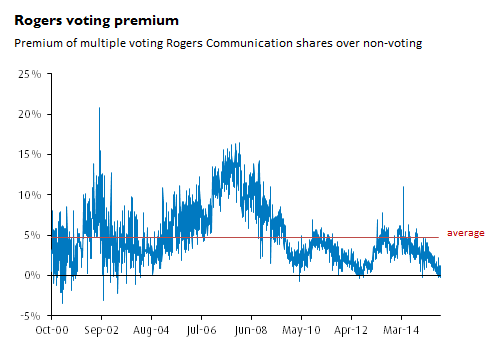 With Google's dual share structure still  relatively new, should Google's investors expect a differential that reaches the size of Rogers' differential, which has hit as high as 15%?

Let's work through the logic. In Canada, the existence of a gap is usually traced to the unequal way that the two classes are sometimes treated in takeovers. A buyer desperate to consummate a deal with a Canadian-listed company characterized by a dual share structure will often offer voting shareholders a large premium to buy their vote while dangling a much smaller reward in front of non-voting shareholders.

This sort of favoritism is detrimental to small shareholders. If an acquirer has earmarked a fixed amount of dollars to make a deal, non-voting investors may very well have to give up a large chunk of that pie to the voting elite. That may explain why Google's voting shares trade at such a large premium to the non-voting shares. When you buy non-voting Google shares, you do so at your peril. Buy the voting shares and at least you have a degree of protection against a low-ball takeover offer.

The protection offered by coattail provisions tends to reduce dual share pricing disparities. For instance, the difference between the subordinated and superior voting shares of Dorel, issued in 1991 and therefore not enjoying grandfathered status, have averaged around 1.05% since listing, much narrower than the 5% gap between Rogers share classes (which was grandfathered its unequal structure).

As these Canadian examples illustrate, the size of Google’s Class A premium over Class C non-voting shares should be very sensitive to the protections afforded to Google Class C shareholders in the event of a corporate change of control. So what about Google's coattails? Does it have any?

Unlike the Toronto Stock Exchange, the NASDAQ, the exchange on which Google is listed, does not require issuers to include coattail provisions. However, according Google’s articles of incorporation Class A and C shares enjoy some degree of protection. I've screenshotted one of the relevant passages, the so-called "Equal Status" clause:


In a nutshell, in the event of a merger, consolidation or other business combination requiring the approval of shareholders, holders of the Class A and C common stock have the right to receive the “same form of consideration” as the holders of the privately-held Class B common stock, the latter being the shares owned by founders Sergey Brin and Larry Page. So if Brin and Page are offered $800 for their shares, and they accept, then all other shareholders get the same right.

So given a cursory read through of Google's articles, a takeover premium on Class A shares should not exist and Google's share gap should not be wide like Rogers' share differential. Google coattail provisions as set out in the 'equal status' clause prevent it. Go out right now and short the living daylights of voting shares while going long the non-voting. It's an easy arbitrage.

Or not. The Canadian business community has a long history of successfully evading the triggering of coattail provisions. In 1997, for instance, Emily Griffiths offloaded the Griffith family's business, Western International Communications, or WIC, by selling its voting and non-voting shares to Shaw Communications, the voting shares being pawned off at a $22 premium to non-voting shares. WIC's articles contained coattail provisions that, in principle at least, should have allowed the non-voting shareholders to enjoy the same takeout price as the voting shareholders. Griffiths were able to structure the deal to avoid setting off the coattail provision (specifically, she sold her stake to multiple parties along with Shaw) and thus extracted the entire takeover premium for herself.

What does this have to say about the value of a Google vote? Beware the fine-print. As in WIC's case, an able team of lawyers might be able to hack Google's Class C coattail provision in order to steal money from the pockets of non-voting shareholders to put in the pockets of voting shareholders. If so, that would explain why a voting premium exists; it represents the price that investors are willing to pay to insure themselves against such chicanery.
Posted by JP Koning at 7:06 PM