A modern example of Gresham's Law


Anyone who makes an effort to study monetary economics quickly encounters the concept of Gresham's law, or the idea that bad money can often chase out good. Gresham's law is usually used to explain the failures of bygone monetary systems like bimetallic and coin standards. But the phenomenon isn't confined to ancient times. I'd argue that a modern incarnation of Gresham's law is occurring right now in Zimbabwe.

Zimbabwe's stock market has blown away all other stock markets by rising 30% in the last month-and-a-half. The chart below compares the Zimbabwe Industrial index to the U.S. S&P 500, both of which are denominated in U.S. dollars. I'd argue that the extraordinary performance of Zimbabwean stock is an instance of Gresham's law. With the imminent arrival of newly printed Zimbabwean paper money, known as bond notes, "bad" paper money is poised to chase out "good" money, stocks being one of the few places where Zimbabweans can protect their savings. 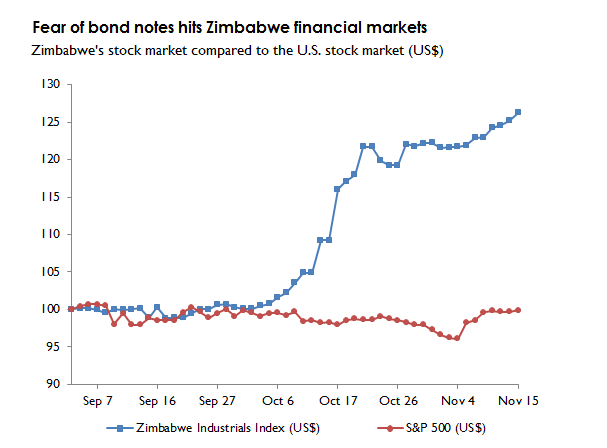 What follows is a quick summary of bond notes (alternatively, read my two earlier posts). The Mugabe government, which began discussing the idea of a new paper currency earlier this year, says that it will issue low denomination bond notes into circulation before the end of the November. Recall that Zimbabwe has been using U.S. dollars since 2008 after a brutal hyperinflation destroyed the value of the local currency. The regime claims that a $1 bond note will be worth the same as a regular $1 Federal Reserve note. It says it has received a U.S. dollar line of credit from the African Export-Import Bank that will guarantee the peg.

Enter Gresham's law, which says that if two different media circulate, and the government dictates that citizens are to accept the two instruments at a fixed ratio—say via legal tender laws—then the undervalued medium will disappear leaving only the overvalued one to circulate. So called bad money drives out good.

Medieval coinage systems were often crippled by Gresham's law. For instance, say a new debased silver penny was introduced into circulation along with existing pennies. Because it contained a smaller amount of silver, the new penny was worth less than the old. However, legal tender laws required that all pennies be accepted without discrimination in the settlement of debts. Medieval debtors would thus always prefer to discharge debts with new pennies rather than old ones since they would be giving up less silver. The result was that only "bad money," or debased coinage, circulated. Because "good money," or undebased coinage, was undervalued, people either hoarded it, sent it overseas, exchanged it on the black market at its true value, or melted it down.

The same conditions that created Gresham effects in medieval times are emerging in modern day Zimbabwe. Rather than two different medieval coins, we've got two different types of dollars; bond notes and regular U.S. cash. The next ingredient for Gresham's law is a decree that dictates the rate at which people are to accept the two instruments. In Zimbabwe's case, the government has already declared that bond notes (once they appear) are to be legal tender along with U.S. Federal Reserve notes, which means that Zimbabwean creditors will have to accept bond notes at par as a means of discharging all debts, even if they'd prefer the genuine thing.

Since a chequing deposit is a debt incurred by a bank to a depositor, this means that Zimbabwean banks can—in theory at least—meet depositors' demands for redemption by providing bond notes. So a Zimbabwean bank deposit is no longer just a claim on actual dollars, but a claim on some mysterious as-yet unissued Zimbabwean government liability.

The last ingredient for Gresham's law is an overvaluation of one of the two media. In Zimbabwe, this will most likely occur as the market value of bond notes falls below that of genuine U.S. dollars. While many countries maintain successful currency pegs to the U.S. dollar, they have the resources to do so. I'm skeptical that the isolated and corrupt Mugabe regime has the resources to pull a peg off.

Bond notes have yet to be issued, but because existing bank deposits—or electronic dollars—are likely to be payable in this new paper currency, we can think of deposits as a surrogate for the bond note. The first bit of evidence that Zimbabwe has run into Gresham's law is that physical U.S. dollars are beginning to disappear from circulation, replaced entirely by electronic dollars. Why might this be happening? Start with the assumption that Zimbabwean bank deposits have become "bad," meaning they are worth less than actual physical dollars. If a Zimbabwean citizen needs to buy $100 in groceries, and the grocer is required by law to accept deposits and cash at the same rate, our citizen will naturally spend only overvalued deposits and hoard "good" and undervalued cash.

In fact, we have direct evidence that deposits have become "bad". In the black market, dealers will only sell physical cash at a premium. I've seen anywhere from 5% to 20% mentioned.

More evidence is provided from the stock market. The shares of Old Mutual, a global financial company, trade on both the Zimbabwe Stock Exchange (ZSE) and the London Stock Exchange (LSE). Because investors have the ability to deregister their shares from one exchange and transfer them for re-registration on the other, arbitrage should keep the prices of each listing in line. After all, if the price in London is too high, then investors need only buy the shares in Zimbabwe, transfer them to London, sell, and repurchase in Zimbabwe, earning risk-free profits. If the price in Zimbabwe is too high, just do the reverse

Oddly, Old Mutual trades in London for around $2.30 per share (after converting into US dollars) whereas it is valued at $3.20 in Zimbabwe. Here's the article that first tipped me off to this. As the chart below shows, this rather large gap has progressively emerged as the introduction of bond notes becomes more likely. Why is no one arbitraging the difference by purchasing Old Mutual in London for $2.30, then transferring it to Zimbabwe to be sold for $3.20? The large discrepancy likely reflects the growing risk that any dollar sent to Zimbabwe is likely to be trapped and re-denominated into a bond note. 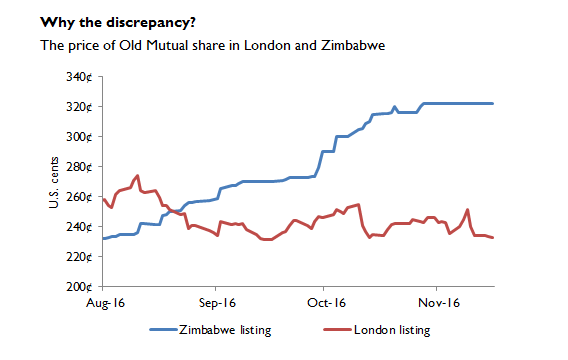 The ratio of the two Old Mutual listings implies that the exchange rate between genuine U.S. dollars and dollars held in Zimbabwe is around 0.72:1, i.e. one Zimbabwean U.S. dollar deposit is only worth 72 cents in genuine U.S. dollars. While transaction costs and other frictions may explain part of the gap, this is still an incredibly wide discount.

Those with long memories will remember that during Zimbabwe's last hyperinflation, the cross-rate between Old Mutual listings was a popular way to measure the true exchange rate between the hyperinflating Zimbabwe dollar and the U.S. dollar. The official rate maintained by the Reserve Bank of Zimbabwe was not the true rate as it dramatically overvalued the Zimbabwe dollar. In the chart below of the hyperinflation, pinched from a paper by Steve Hanke, the Old Mutual Implied Rate—or OMIR—appears along with the black market rate for U.S. dollars. (I once discussed the OMIR here. The same trick was used in Venezuela using ADRs.)


Once all the ingredients for Gresham's law are in place, inflation is never far behind. Because U.S. dollars are being undervalued, Zimbabweans will refuse to buy stuff with anything other than overvalued deposits. If they don't update their sticker prices, retailers will soon discover that they are receiving fewer real dollars than before. To maintain the real value of their revenues, they will have to mark up their prices, thus compensating for the fact that only "bad" money is flowing into their tills.

While retail prices are usually sticky, financial prices are not. And that may be why we've seen such a huge jump in Zimbabwean stock prices but little movement in Zimbabwean consumer price inflation. With Gresham's law beginning to push good money out of circulation, nimble owners of Zimbabwean shares are demanding a higher share price from potential share buyers in order to compensate for the risk of holding soon-to-be issued bond notes. Less nimble retailers have yet to demand this same compensation from their customers. Don't expect this to last; consumer price inflation can't be too far behind asset price inflation.
Posted by JP Koning at 2:36 PM