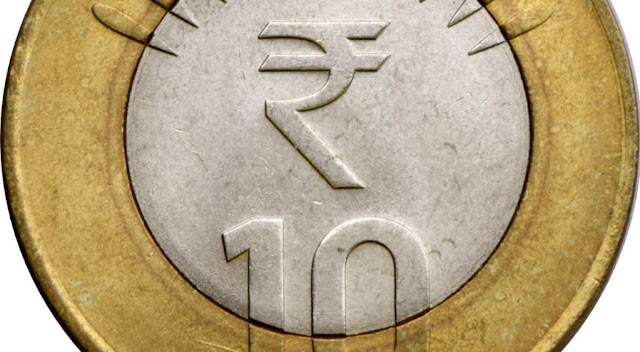 The BBC has an interesting story about India's coinage. Apparently more and more Indians  believe that the ₹10 coin is not real, or that it has been banned by the authorities, and as a result they are unwilling to accept them in trade. Doubts about the ₹10 coin have been emerging for several years now: Amol Agarwal has covered the story here, here, and here.

This is an excerpt from the BBC article:


"Nobody accepts the coins - grocery shops, tea stalls, nobody accepts it", an auto rickshaw driver in the southern state of Tamil Nadu told BBC Tamil.

In the southern city of Hyderabad, a young girl told BBC Telugu she had been saving up to buy her brother a gift but several shop owners wouldn't take her 10 rupee coins.

A man on his way to a job interview was forced to get off the bus because the conductor wouldn't accept 10 rupee coins, the only currency he had.

"They say it's because the other passengers don't accept the coins in return", explains a shop owner who also said bus conductors wouldn't take the coins.

The Reserve Bank of India (RBI) has twice addressed the public's worries about the ₹10 coin. In a 2016 announcement it begged Indians to ignore "ill-informed notions" concerning the legitimacy of ₹10 coins and to continue to "accept these coins as legal tender in all their transactions without any hesitation." More recently, in a January notice, we learn that the RBI has issued fourteen different designs for the ₹10, all of which are "legal tender and can be accepted for transactions."

What are the underlying reasons for Indians' fears? One interesting fact about the ₹10 coin is that it is relatively new, having been introduced back in 2009. People are always skeptical about new monetary instruments, which generally take a long time to acquire trust.

Another interesting fact is that in addition to minting a ₹10 coin, the RBI also prints a ₹10 banknote. The ₹10 banknote has a long history, having debuted before independence in 1947. Below is a chart showing how many of each instrument is in circulation. The year-over-year net increase in banknotes continues to outpace the increase in coins by a large amount, indicating that  Indian's have a preference for the paper version of the ₹10. 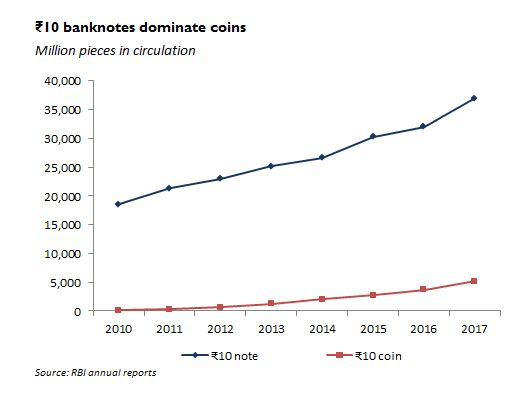 I think there is an easy explanation for the ₹10 coin's loss of currency. Because the ₹10 coin and ₹10 note are perfect substitutes, and converting between them incurs no conversion costs, there is no disciplining mechanism to prevent irrational worries about the newer of these two instruments from crippling its usage. Put differently, hating new ₹10 coins doesn't impose any costs on the hater as long as an equivalent banknote can be used. If there was no such thing as the ₹10 banknote, then anyone who refused to use the ₹10 coin would face much higher costs for being unreasonable. After all, holding two ₹5 coins or five ₹2 coins in the place of a ₹10 coin is inconvenient.

The denomination at which a monetary system switches from coins to notes is referred to by Rocheteau and Lotz (pdf) as the coin-note frontier. In Canada, for instance, the frontier lies between the $2 coin and $5 note, while in Switzerland it lies between the 5 franc coin and 10 franc note. Most frontiers (like Canada's and Switzerland's) are staggered—the largest coin is smaller than the smallest note. This staggering makes a lot of sense. Why should both the nation's mint and its printing presses incur the fixed costs of producing the same unit when one will suffice? Consider too the waste incurred in the doubling-up of the tasks of distributing, sorting and handling a coin and note of the same denomination.

Unlike most countries, India has an even coin-note frontier. For some reason, the Indian monetary authorities have decided to have both the mints and the presses replicate the same task of producing the ₹10. Interestingly, India isn't alone. The U.S.'s largest coin is $1 while the smallest note is $1. 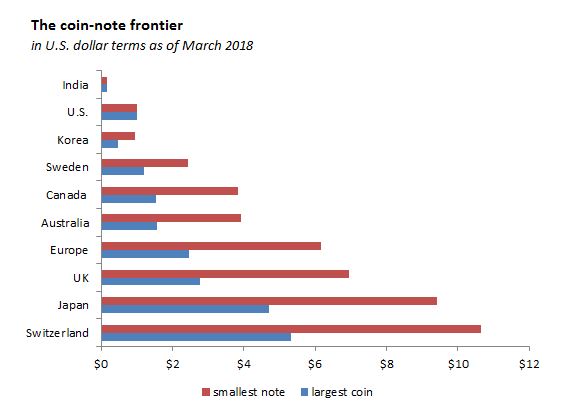 The US's $1 coin, introduced in 1979 and referred to as the Susan B. Anthony dollar, is commonly considered to be a major monetary failure. I wrote about it here. $1 coins have proven to be unpopular with the American public, huge amounts of them accumulating in vaults at various Federal Reserve banks. Because the US monetary authorities decided to introduce the $1 coin without removing the $1 bill, the public was given a choice between a perceived "good" currency, the existing and comfortable note, and a "bad" currency, an unfamiliar coin. They took the less costly route and stuck with the "good" notes. My guess is that the very same forces that doomed the $1 coin could end up killing off the ₹10 coin.

The failure of the $1 and ₹10 coins is unfortunate. As Rocheteau and Lotz point out, replacing low denomination notes with coins is a good idea because the the cost of keeping bills in circulation is greater than the cost of servicing coins. While coins are more expensive to produce, they last much longer than bills.

So not only are the US and India doubling up their costs by having both the mint and printing presses produce the same instrument, but at the same time the decision to keep the note in circulation means that the more efficient instrument—the coin—is destined to fail. The Reserve Bank of India blames the public's "ill-informed notions" for the ₹10 coin's loss of currency. But perhaps it should be blaming itself for providing the right conditions that allow for the spread of these ill-informed notions. Remove the ₹10 note and the problem will be fixed.

Amol Agarwal has some comments here.
Posted by JP Koning at 12:57 PM