Merry Christmas and Happy New Year to all my readers. And to everyone who left a comment this year, thank you. It's always fun to debate things over in the comments section and I feel it makes the blogs themselves stronger. Don't forget to check out the discussion board where we had a number of interesting discussions in 2018.

The last time I published my Christmas cash usage chart was in 2015. I figured it was high time to update it: 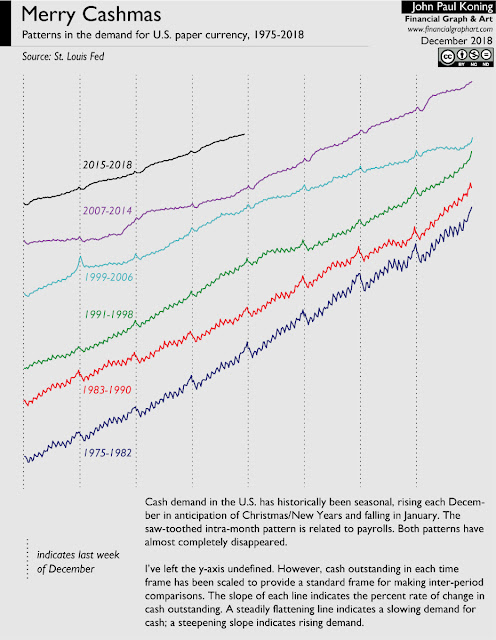 The annual Christmas spike in U.S. banknote demand is getting harder and harder to pick out in the chart. So are the monthly upticks coinciding with payrolls. Most people are getting pretty comfortable buying stuff with cards. And so they are less likely to take cash out of an ATM before the holiday chaos or withdraw grocery money after a paycheck has been deposited.

Even though transactional demand for dollars is on the downswing, the stock of Federal Reserve banknotes continues to grow at a healthy pace. The slope of the black line (i.e. its growth rate) may not be as steep as it was in the 1970s, 80s, or 90s, but it is certainly steeper than it was in the 2000s. It is typical to divide cash demand into two buckets. Cash held for transactional purposes gets folded into a wallet. Cash held for store-of-value purposes gets buried in back yards or hidden under mattresses. Continued growth in the demand for U.S. dollars is mostly due to the latter, not only in the U.S. but all over the world.

Here is the same chart for Canada: 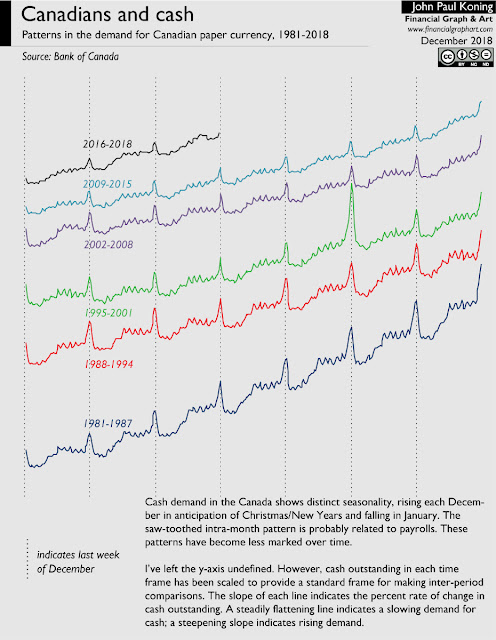 Both the Christmas bump and the sawtooth pattern arising from monthly payrolls are less noticeable than previous years. But these patterns remain more apparent for Canadian dollars than U.S. dollars. Not because Canadians like cash more than Americans. We don't, and are probably further along the path towards digital payments then they are. Rather, the percentage of U.S. dollars held overseas is much larger than Canadian dollars, so domestic usage of U.S. cash for transactions purposes gets blurred by all its other uses.

These were my top posts of 2018 by order of popularity:

Two notions of fungibility
Did Brexit break the banknote?
The €300 million cash withdrawal
"The Narrow Bank"
Bitcoin and the bubble theory of money

Two older posts got a lot of visitors too.

Who knew that Chile's strange indexed unit of account, the Unidad de Fomento, would be a draw?

My favorite post of the year was Paying interest on cash. I like this policy. It helps the lower-income and unbanked earn interest. It also provides a means for central bankers to promote cash usage, which in turn helps keep financial privacy alive. And economists should like it, since it fulfills the Friedman rule.

For those of you who don't know, I've also been doing much more paid writing in 2018. Prior to that, blogging was more of a hobby. Here are the venues I've been writing for: Breaker, Bullionstar, and the Sound Money project. If you don't have much time to check out my articles, here are my favorites from each:

Bitcoin Is Perfect for Cross Border Payments (Except for One Big Problem) - Why I don't use bitcoin for getting paid.
The future of cash: Iceland vs Sweden - We always assume that Scandinavians are moving away from cash, but Iceland shows that this isn't the case.
Pricing the anonymity of banknotes - Should financial anonymity be provided in abundance, banned, or should we pay for it?

My paper for @inside_r3 exploring the idea of a Brazilian central bank digital currency is up: https://t.co/2oHwE5AYNt pic.twitter.com/4jOp7Q3vQb
— JP Koning (@jp_koning) December 9, 2018

Many of the points I make apply just as well to any other country.
Posted by JP Koning at 7:05 AM

Email ThisBlogThis!Share to TwitterShare to FacebookShare to Pinterest
Labels: cash, store of value