Ever since the coronavirus hit, the Bank of Canada's balance sheet has been exploding. In late February its assets measured just $118 billion. Eight weeks later the Bank of Canada has $440 billion in assets. That's a $320 billion jump!

To put this in context, I've charted out the Bank of Canada's assets going back to when it was founded in 1935. (Note: to make the distant past comparable to the present, the axis uses logarithmic scaling.) 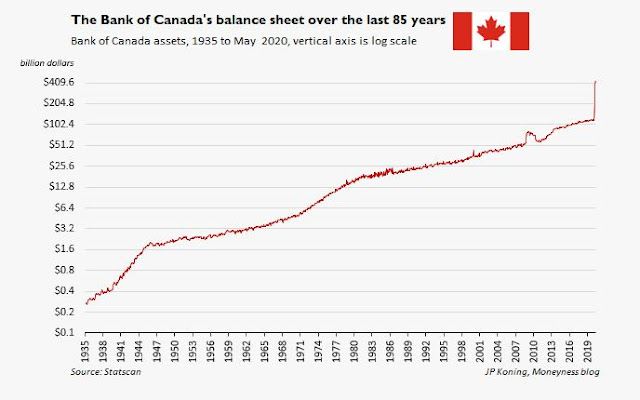 The rate of increase in Bank of Canada assets far exceeds the 2008 credit crisis, the 1970s inflation, or World War II. Some Canadians may be wondering what is going on here. This blog post will offer a quick explanation. I will resist editorializing (you can poke me in the comments section for more colour) and limit myself to the facts.

We can break the $320 billion jump in assets into three components:

Let's start with repos, or repurchase operations. Luckily, I don't have to go into much detail on this. A few weeks back Brian Romanchuk had a nice summary of the Bank of Canada's repos, which have been responsible for $185 billion of the $320 billion jump.

The idea behind repos is to provide temporary liquidity to banks and other financial institutions while protecting the Bank of Canada's financial health by taking in a suitable amount of collateral. If the repo counterparty fails, at least the Bank of Canada can seize the collateral that was left on deposit. This is the same principle that pawn shops use. The reasons for providing liquidity to banks and other financial institutions is complex, but it goes back to the lender of last resort function of centralized banking. This is a role that central banks and clearinghouses inherited back in the 1800s.

How temporary are repos? And what sort of collateral does the Bank of Canada accept? In normal times, repos are often  unwound the very next day. The Bank also offers "term repos". These typically have a duration of 1 or 3-months. The list of repo collateral during normal times is fairly limited. The Bank of Canada will only accept Federal or provincial debt. That's the safest of the safe.

But in emergencies, the Bank of Canada is allowed to extend the time span of its repos to as long as it wants. It can also expand its list of accepted collateral to include riskier stuff. Which is what it did in March 2020 as it gradually widened the types of securities it would accept to include all of the following:


That's a lot of security types! (The list is much larger if you click through the above link to securities eligible for the standing liquidity facility, see here. Nope, equities are not accepted as collateral.)

As for the temporary nature of these repos, many now extend as far as two years into the future. See screenshot below:


(Note that the Bank of Canada has a very specific procedure for moving from "regular" purchases to "emergency" purchases. Part of this was implemented due to its initial reaction in 2007 to the emerging credit crisis. It accidentally began to accept some types of repo collateral that were specifically prohibited by the Bank of Canada Act. The legislative changes implemented in 2008 remedied some of the problems highlighted by this episode and codified the process for going to emergency status. Yours truly was involved in this, click through the above link.)

Anyways, we've dealt with the $185 billion in repos. Now let's get into the second component of the big $320 billion jump: open market purchases of long-term government bonds, or what the Bank of Canada refers to as the Government of Canada Bond Purchase Program (GBPP). This accounts for another $50 billion or so in new assets.

Whereas a repo is temporary, an outright purchase is permanent. Some commentators have described the purchases that the GBPP is doing as "quantitative easing". But the Bank of Canada has been reticent to call it that. When it first announced the GBPP, it said that the goal was to "help address strains in the Government of Canada debt market and enhance the effectiveness of all other actions taken so far."

This is a non-standard reason. Large scale asset purchases are normally described by central bankers as an alternative tool for stimulating aggregate demand. Usually central banks use interest rate cuts to get spending going. But when interest rates are near 0% they may switch to large scale asset purchases. (The most famous of these episodes were the Federal Reserve's QE1, QE2, and QE3). But the Bank of Canada seems to be saying that its large scale purchases are meant to fix "strains" in the market for buying and selling government bonds, not to stoke the broader economy.

Together, the GBPP and repos account for $235 billion of the $320 billion jump.

Let's deal with the last component. Another $65 or so billion in new Bank of Canada assets is comprised of purchases of government Treasury bills (T-bills). A T-bill is a short term government debt instrument, usually no more than one year. This is interesting, because here the Bank of Canada can do something a lot of central banks can't.

Since the coronavirus crisis began, the Federal government under Justin Trudeau has revved up the amount of Treasury bills that it is issuing. As the chart below illustrates, in the last two Treasury bill auctions (which now occur weekly instead of every two weeks) it has raised $35 billion each. 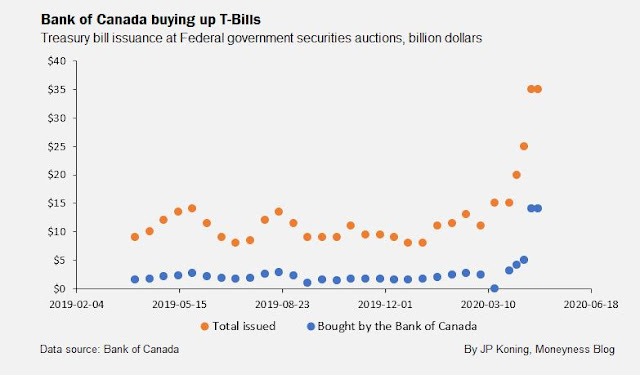 (So who cares whether the Bank of Canada buys government bonds/T-bills directly at government securities auctions instead of in the secondary market, as it is doing with the GBPP?  It's complicated, but part of this controversy has to do with potential threats to the independence of the central bank. But as I said at the outset, I'm resisting editorializing.)

These three components get us to $300 billion. The last $25 billion is due to other programs. I will list them below and perhaps another blogger can take these up, or I will do so in the comments section or in another blog post:

And that, folks, is how the Bank of Canada's assets grew to $440 billion in just two months.
Posted by JP Koning at 7:05 PM