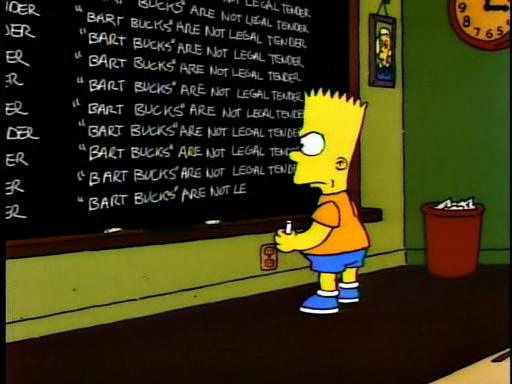 We discussed the definition of legal tender last week. Legal tender, in short, is any medium that can always be relied on to discharge a debt. Here's the next question—how does the conferral of legal tender status on an item affect that item's value? Here are my rough thoughts.

As I did in an older post on chartal coupon money, I'm going to make use of McDonald's Corporation to illustrate monetary phenomena. Let's say McDonald's wants to create its own form of legal tender: frozen meat patties. It does so by setting the 4 inch wide, 1/4 inch thick frozen beef patty as legal tender for all its receivables. This means that anyone indebted to McDonald's has to settle their debt with legal tender patties. If they owe $1000, they have to pay with $1000 worth of beef.

Next, McDonald's requires its suppliers, many of whom are entirely dependent on McDonald's for survival, to abide by its legal tender rules. Rather than give up their relationship with McDonald's, they accept. As a result, not only can debts due to McDonald's be settled in patties—so can debts due to a number of ranchers, bakeries, farmers, wholesalers, etc who are part of the McDonald's supply chain.

These developments will immediately increase the market price of 1/4 inch frozen beef patties. Why? Given the patty's new capacity to discharge all debts due to both McDonald's and its suppliers, it will be regarded as more liquid than if it didn't have this status. Instead of storing just one box of hamburger patties for future consumption or sale, a household or restaurant might keep a second in reserve for potential debt repayments. Since it provides an extra range of liquidity services, a 1/4 inch frozen patty will thereby gain a premium over its pre-legal tender market value.

Let's say that instead of beef patties, McDonald's declares that a new intrinsically worthless issue of yellow McDonald's certificates is to be made legal tender for $100 worth of debt. Anyone can buy the certificates at McDonald's, either with cash or in kind (say by selling supplies) and use them to pay off their debts to McDonald's or its suppliers. As debts are paid off, suppliers who accumulate unneeded certificates can offload them in the secondary market where debtors who need to settle debts can buy them.

On the other hand, if the market price of certificates rises to $110, all one need do is buy certificates from McDonald's for $100 and sell them for $110 until the gap has been closed.

In any case, what is interesting here is that legal tender laws can add a liquidity premium to an already valuable commodity, or bestow market value on worthless bits of paper. That's not to say these certificates are pure fiat. After all, what makes them valuable is that they represent a liability of sorts, acceptance of which is backed up by power. Pure fiat objects, on the other hand, are items that circulate despite being no the liability of no one and having no intrinsic usefulness whatsoever.

As long as there are unredeemed certificates, or float, McDonald's earns seigniorage profits. After all, if $1000 worth of certificates are in circulation, the company pays no interest these certificates but can invest the proceeds in interest yielding bonds. The wider the circulation of McDonald's certificates, the larger the float and juicier the profits. Other large companies will of course be interested in enjoying seigniorage, and one can imagine them also trying to exert market power over their supply chains with legal tender rules. Their ability to do so will always be counterbalanced by competition, for if seigniorage gets too onerous, McDonalds' suppliers might flee to competitor Burger King, which may have less onerous seigniorage or no legal tender rules at all.

Extreme abuse of seigniorage would eventually result in certificates being worthless. Say McDonald's gets greedy and starts to sell certificates for $110. Anyone indebted to McDonald's or one of its suppliers is thus forced into the perverse position of having to acquire a certificate for $110 in order to settle a $100 debt, giving the debtor an immediate $10 loss. As a result, no one will choose to ever indebt themselves to either McDonald's or its suppliers. Soon, all debt in the McDonald's supply chain will have expired. Certificates will be worthless since their only source of value was their ability to discharge debts—and there is no more debt to discharge.