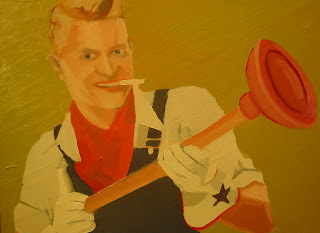 I see that the mainstream bloggers are starting to flog the bitcoin story, which means I'll be moving on to greener blogging pastures for the time being. I've had some great discussions in my last few posts with my commenters. As always, this blog is meant to be learning tool, both for me to absorb things from others and hopefully vice versa. In this post I'm going to discuss the idea of a plunge protection team made up of avid bitcoin collectors that could potentially anchors bitcoin's price and provide a degree of automatic stabilization.

In all my bitcoin posts I've been emphasizing that bitcoin lacks a fundamental, or intrinsic, value. Regular commenter Peter Surda disagrees, pointing out that despite their intangibility, virtual goods should not be seen as inferior to so-called real assets. I completely agree with him. 0s and 1s can be valuable. When I bandy around the term fundamental value, I'm not talking about physicality or solidity. What I'm referring to is an asset's non-monetary value.

The best way to think about non-monetary value is by reference its counterpart—monetary value. A good or asset has monetary value when a subset of the people who hold it do so solely for its moneyness, or its ability to be exchanged in the future. Perhaps these people are driven by a transactions motive. They plan to hold the asset for a day or a month before exchanging it on for another good. Alternatively they may be driven by the speculative motive. They intend to temporarily hold the asset, always with the goal of passing it on at a higher price. Transactors and speculators alike value their inventory of gold, cash, bitcoin, or whatever, for its ability to be exchanged, and not for any other reason.

Strip out an asset's monetary value, and you're left with the remainder: pure non-monetary value. This is the fundamental core of an asset, or its intrinsic value. One way to think about this is to imagine what would happen to an asset upon the sudden flight of all transactors and speculators from the market. The remaining holders of the asset will be those who value it on a purely fundamental basis. They have no intention of ever selling out of their position and are perfectly content to sit on their holdings and "consume" them.

I've made the claim that a bitcoin has no fundamental value because it's mere ledger space. If all the bitcoin speculators were to suddenly split, no one would be left to holding the bag. But doesn't this apply to other assets? Jon Matonis brings up the idea that central bank instruments could also be viewed as blank ledger space. Adam Love points to gold as a potential analogy.

Let's run through how other assets evolve when speculators and exchangers panic and bolt.

Stocks: When all speculators try to sell, a stock's price quickly plunges. Because the firm's earnings power hasn't changed, at some lower price the CFO realizes that capital should be directed to retiring the firm's own shares from the secondary market rather than investing in projects. At this price, the firm will buy up every share offered till all speculative selling is exhausted.

Gold: If all transactors and speculators try to sell their gold then its price collapses. Jewelers, dentists, and manufacturers begin to withdraw gold from the market at these advantageous prices because they can use the metal to displace more expensive alternative materials. All unwanted monetary gold will be removed into the inventories of jewelers, dentists, and manufactures, or into their finished product.

My incessant concern with a speculator-driven collapse in monetary value isn't just me being ornery. Any given asset faces a daily threat of liquidity flight. These sorts of runs can quickly become self fulfilling phenomena. If one speculator causes an asset's price to fall by selling it off, more speculators might bolt, thereby causing yet another fall in price, causing more speculator flight, ad infinitum. Similarly, as transactors make less use of an asset, that asset loses liquidity, causing transactors to use it even less, causing it to lose liquidity, and so on and so forth. The moneyness of an asset can quickly implode, blackhole-like.

Gold, stocks, and central bank reserves/cash all have fundamental mechanisms for ensuring that this sort of flight is dampened. In the case of bitcoin though, if transactors and speculators get spooked there is no central bank to suck bitcoin back in, nor a CFO to conduct buy backs, nor dentists or jewelers to re-purpose it for alternative uses. Bitcoin is 100% moneyness. Whenever a liquidity crisis hits, the only way for the bitcoin market to accommodate everyone's demand to sell is for the price of bitcoin to hit zero—all out implosion.

Commenter Arvicco points out that there is a non-monetary core at the heart of bitcoin. People value bitcoin as a collectible. Mike Sproul has also brought up this possibility, comparing bitcoin to baseball cards. In my first bitcoin post, I hypothesized that bitcoin might be an indicator of geek cred, a badge of sorts. Does bitcoin actually have a fundamental value? Let's assume for the moment that this view is right. This means that come the next liquidity crisis, bitcoin won't collapse to zero but will bottom out at whatever price so-called bitcoin collectors are willing (and able) to set. Just like jewelers and dentists act as safety valves in the gold market, cushioning panic-driven speculative declines in the gold price through their purchases, the bitcoin collector community will step in as buyer of last resort to ensure that BTC never falls to 0.

Who might these collectors be? They are bitcoin's true believers, the ones who have been there from the start (or wish they had). Out of pure admiration for bitcoin, they'd willingly buy it at any positive value, even though the rest of the world couldn't care less about bitcoin's unique properties. Collectors hold bitcoin  not because they plan to exchange it on for a better price, but as a permanent consumption good. These folks joins other rare birds like stamp collectors and crocheted doily collectors in setting the fundamental value of an item that the rest of the world neither understands nor values for its own sake.

This is different from the gold market. Jewelers, manufacturers, and dentists take gold out of the market during panics not because they collect the metal, nor because they're loyal to it. They do so because their profit and loss calculation tells them that it makes sense to do so.

I'm not able to appraise how big the core collector community is and how determined its member are, but I am skeptical of their ability to absorb a mass exodus of bitcoin speculators and transactors. After all, there's a tremendous amount of speculation in the market, surely far more speculators than transactors. So for now I'll remain a seller of bitcoin, since I'm worried about instability. But let's ignore my outlook. Here are some thoughts about bitcoin true believers as a potential plunge protection team.

First, there needs to be a lot of collectors if they're going to successfully anchor bitcoin's price against massive and inevitable monetary panics. They should be firm in their commitment to bitcoin. There needs to be a steady recruitment of new people to the collecting cause. A mythology is a great tool for inspiring collectors and potential collectors. The story of bitcoin founder Satoshi Nakamoto or the techno-anarchist narratives of bitcoin-as-destroyer-of-government-money and liberator-of-society are powerful coordination devices. When bitcoin crashes $40 in ten minutes, it'll take waves of devoted believers to put in plunge protection buy orders. If Bitcoin's cultural motifs are sufficient to motivate the requisite desire to hold and consume bitcoin as collector's items, then perhaps a future liquidity panic won't cause bitcoin to implode.

Secondly, the bitcoin collector community should be selling into every bitcoin price rise so that they have the ammunition to reinforce plunge protection efforts when the market inevitably experiences a speculative run. By selling high, bitcoin collectors will have sufficient reserves of USD, pounds, yen etc to repurchase bitcoin from speculators when the latter eventually flee. Just as buying into falls should help halt plunges, the process of selling into a rise will have the side benefit of softening the rise, thereby reducing speculative excess.

There are a lot of interesting catch-22s here. Too much speculation is dangerous since a speculative buyer represents a future panic-seller for whom collectors will have to budget resources to purchase unwanted coin. But at the same time, as more collectors are drawn to the bitcoin mythology, they push prices up, attracting the very same speculative elements that threaten to destabilize bitcoin. Speculators, after all, love fast-moving unidirectional markets. Here's another irony. Even as the plunge protection team anchors bitcoin's price to the downside, in doing so it creates a Greenspan put of sorts, insuring speculators that they'll never lose more than a fixed amount of their capital. This only inspires more speculation. The last catch-22 is this. A plunge protection team of loyal collectors needs to keep a store of central bank media-of- exchange to repurchase bitcoin from fleeing speculators and prevent the zero value problem—but owning fiat instruments clashes with the whole anti-fiat mythology of bitcoin.

I'm skeptical of the ability of collectors to act as the necessary automatic stabilizer to counterbalance mass speculative exit. I'm not convinced that they can ensure that bitcoin will be around 10 years from now. I still think some sort of blockchain-style ledger will be in use 10 years from now, but it won't be the bitcoin ledger. But who knows, odder things have happened.


PS: Notice that I haven't used the word "money" once. I challenge commenters to avoid the word too. Trying to define something as money or not causes all sorts of distractions.
Posted by JP Koning at 11:34 PM