The Biden stimulus and the big jump in cash

This jump surprised me (ht to David Beckworth, who brought it to my attention). That's because cash demand patterns are typically quite predictable. We always see a seasonal Christmas/New Year's rush for cash. After Christmas vacation is finished the stock of cash always falls as notes and coins are returned to banks. For the rest of the year the stock of notes slowly rises. During crisis (i.e. Y2K, 9/11, the 2008 credit crisis, and the coronavirus panic) the demand for cash spikes.

But there shouldn't be a cash surge in the middle of a quiet March.

To see how odd this spring's jump in the stock of cash is, I've plotted banknote data from the period beginning November 2020 to now and compared it to equivalent November-to-October periods from 2013-2019. (I've omitted 2020 due to coronavirus-induced oddities). To better facilitate comparison, I've set the opening banknote balance for each period to 1. 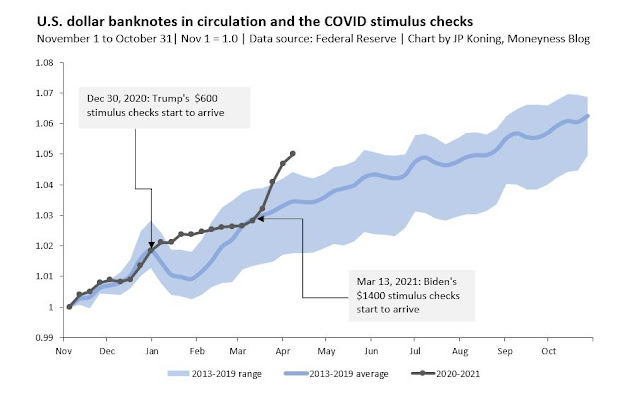 The large increase in cash beginning in mid-March 2021 goes far beyond the range set between 2013 and 2019. (Also, take a look at the strange out-of-season pattern in January. We'll get into that further down.)

Here's what I think is happening. On March 13 the Biden stimulus checks started to arrive. For the next few months around 150,000 Americans are expected to receive individual payments of $1400. Those with a child dependent will receive an additional $1400. According to the Congressional Budget Office, the total amount of stimulus is budgeted at $411 billion. By now most of this amount has already been sent out, either in the form of direct deposit, a paper check, or a plastic prepaid debit card.

We'd expect Americans to withdraw a chunk of the $411 billion in stimulus in the form of cash. After all, many people still like to use cash for payments. And many businesses still operate on a cash-only basis. As the chart shows, that's exactly what has happened.

Because banknote patterns are stable, we can use data from previous years to get a pretty good idea about what the stock of cash would be absent stimulus checks. Using weekly data from 2013 to 2019 to infer 2021 numbers, I estimate that there would normally be around $2.067 trillion in banknotes outstanding by mid-April. But this number is clocking in at $2.101 trillion. So thanks to the Biden stimulus, there appears to be $34 billion in extra notes that wouldn't otherwise be there. This averages out to $100 per American.

There are a lot of assumptions in this estimate. I'm assuming that the Biden checks are the only factor explaining the difference between the actual stock of banknotes and an imputed "no stimulus" stock. But this assumption could be wrong.

Cash being withdrawn into circulation is a sign that the stimulus is working. As Claudia Sahm writes here, one goal of a stimulus is to kick-start a self-reinforcing spending loop. My spending on goods & services at your businesses encourages you to spend on goods & services, which gets the next person to do the same. The big jump in cash-in-circulation shows that people are indeed spending their $1400 stimulus rather than saving it in their bank accounts. Put differently, if we didn't see any increase in cash-in-circulation we'd be worried that the $1400 stimulus was being hoarded, not spent.

By the way, we can also see the effects of Trump's earlier stimulus on cash demand in the above chart. The Consolidated Appropriations Act, signed into law in late December 2020, entitled all American adults to a one-time $600 plus $600 per child dependent. The CBO set the total cost of Trump's stimulus checks at $164 billion. This round of checks began to arrive in bank accounts on December 30 and continued into January.

But here things get a bit more complicated. The $600 stimulus payments began to be distributed around New Year, thus overlapping with the traditional unwinding of the big Christmas/New Year splurge in cash. This year the Christmas/New Year effect may have been muted given that many families avoided vacationing and travel due to COVID-19. But in any case, the two effects have counterbalanced each other. The traditional post-New Year's slump in the banknote stock didn't occur this January. Instead, banknotes-in-circulation slowly grew thanks to the stimulus check effect.

The chart shows that by late February 2021 the stock of banknotes had returned to its 2013-2019 average. This suggests that all of the extra Trump stimulus that had been withdrawn as cash had been spent at shops, only to be redeposited at banks, and then the Federal Reserve.

I suspect that the same thing will likely happen with the Biden stimulus. By June, the big bulge in cash will have shrunk. Having been spent, the notes will be sent back by retailers to their bank via Brinks trucks, and then on to the Fed.

One would hope that not all of it disappears. As I suggested earlier, stimulus is supposed to set off a multiplier effect. When this effect has played out, prices and/or output should all have risen by a bit. This means that the ending stock of cash should be a bit higher than before. After all, if the economy has improved, then we all need to hold a bit more cash in our pockets to support our new spending habits.
Posted by JP Koning at 1:23 PM