The vandalization of "bitcoin accepted" signs 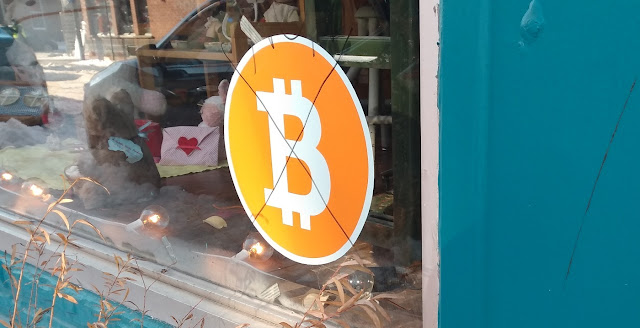 Why We Need Crypto Payments to Work

Crypto has always held out the promise of a payments revolution. But that revolution never happened.

We're 13 years into the Bitcoin age, and there’s only one store in my neighborhood in downtown Montreal that advertises that it accepts bitcoin. I was passing by that store the other day and noticed that a vandal had crossed out the bright orange ₿ written on the storefront, adding a "non" in protest.

Why? The vandal didn't provide us with more information. But if I had to guess it probably had to do with their opinions on the environmental implications of bitcoin's security method, proof-of-work. Proof-of-work requires huge amounts of electricity, and in an age of global warming there's no place for such an awesome display of energy consumption.

This small example is illustrative of the crypto payments challenge. It's tough enough for crypto to gain acceptance as a payments network. The medium’s inherent volatility and novelty are huge hurdles. Add to that concerns about crypto’s effect on the environment, and getting the payments ball rolling becomes even more of a challenge.

But even normies who don't care about crypto should want it to succeed as a payments medium.

Cash is rapidly disappearing as a payment medium. The big winners are the Visa and MasterCard card oligopolies. Every time someone deserts cash, the card networks get a little more powerful. As consumers we don't often notice the few cents that the card networks extract from us when we pay with our debit or credit cards, but it leads to fantastic profits for them. Visa and MasterCard's returns on equity – 40% and 120% respectively – give testament to their wide oligopolistic moats. (The average company's return is a meager 10-15%).

There are a number of solutions to oligopolies, one of them being competition. If there are more payment networks fighting for market share, we consumers (and the retailers we frequent) can at least choose the cheapest one.

And that's why it would be nice if crypto worked for payments.

Alas, crypto usage has been mostly confined to the relatively small confines of the speculative crypto economy, only leaking out once in a while to serve as a normie payments medium. These leaks may be slowly plugging up, too. Over the last year or so, activists have been trying to push the small advance that crypto has achieved in the payments realm into retreat.

My neighborhood store is just one example. The storekeeper's internal dialogue might have gone after seeing their store window vandalized: "Why bother accepting the odd bitcoin payment when it attracts such negative attention?"

Last month, hundreds of long-time Wikipedia editors asked the Wikimedia Foundation to stop accepting cryptocurrency, the most popular reason put forth being its environmental sustainability. A few months before, Discord – a popular messaging platform – quashed rumors of a cryptocurrency integration after pushback from users concerned over energy use.

The Wikipedia editors' vehemence stands in contrast to the tiny amount of crypto that Wikimedia has collected. According to Wikimedia, just 0.08% of its donations have been in crypto, mostly bitcoin. The Wikimedia Foundation has little reason to say no to the activists. At 0.08%, crypto isn't proving to be very useful for accepting payments. Why bother pushing back?

Had the activists campaigned for Wikimedia to stop accepting Visa, for instance, it'd be a complete non-starter. Visa has an advantage over crypto. It’s already big, likely accounting for a decisive percentage of Wikimedia donations.

That you can’t say no to Visa, but you can say no to crypto, illustrates the crypto payments dilemma. Retail payments networks are notoriously difficult to bootstrap. It's the classic chicken-and-egg problem. For an individual to adopt it, a new payment option needs to be already useful (by being widely available and spendable at shops), but it can't be already useful if no one wants to try it in the first place.

Making this paradox worse is that the card networks already have firm footholds. People have grown used to their plastic, and the incumbents use dirty tricks to enforce lock-in, like card reward points and no-surcharge policies. The nut is made even harder to break by crypto's incredible volatility. Risk-averse new users are reluctant to try it.

But the crypto world has evolved a response to volatility. Stablecoins are a type of cryptocurrency that is pegged to traditional fiat money, which makes them less intimidating for people to use. And so where regular crypto comes short, stablecoins at least stand a fighting chance against the MasterCard and Visa oligopolies.

Unfortunately, stablecoins are built on energy-intensive proof-of-work blockchains, which opens them up to the growing environmental critique. Given the already difficult chicken-egg payments problem being faced by stablecoin issuers, the last thing they need is for card users to come up with one more excuse not to give stablecoins a try.

Mozilla's recent reappraisal of its crypto acceptance policy provides a good example of how I hope the debate evolves. In January, Mozilla – the nonprofit organization that makes the Firefox web browser – decided to temporarily pause cryptocurrency donations to see how crypto "fits with our climate goals."

This month Mozilla announced its new policy. Rather than closing the door on crypto, it came up with a more nuanced solution. Mozilla won’t accept proof-of-work coins, but it'll accept proof-of-stake cryptocurrencies it sees as "less energy intensive."

If Mozilla's more welcoming policy is emulated, and one hopes it is, it offers stablecoin issuers a window. But this window comes at a price. If stablecoins are ever going to compete in a meaningful way with the card networks, they need to dissociate themselves from proof-of-work. That may mean avoiding expansion to proof-of-work blockchains. At the worst, it means helplessly waiting while the proof-of-work chains on which they already exist, like Ethereum, switch over to less energy intensive security methods.

Removing as much ammunition as possible from critics will make the already difficult chicken-and-egg payments problem a little easier for stablecoins to solve. We need them to win, though. Visa and MasterCard aren't getting any less dominant.