Central banks deposits for you and me 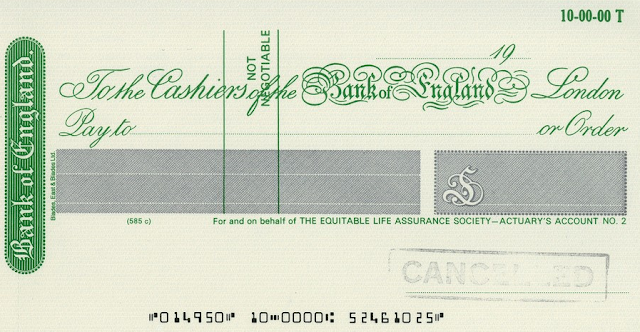 The Bank of England recently announced that it will end a 300-year tradition of allowing employees to keep chequing accounts at the Bank. You can see an example of a cheque above, which is marked with the sort code 10-00-00. Traditionally, folks like you and me have only been able to get a piece of the central bank's balance sheet by holding banknotes. Central bank deposit accounts, which are far more convenient, have been limited to banks and other financial institutions. But the BoE provides a rare example of regular people, specifically employees, being permitted to directly own fully transferable central bank deposits, at least until recently.

The BoE's termination of this seemingly archaic practice is especially interesting in the context of growing efforts to crack open central bank balance sheets to those who have traditionally been hived off from them. A concrete step in this direction is the Federal Reserve's overnight reverse repurchase facility, which allows money market mutual funds to hold overnight balances at the Fed. More ambitious (but less concrete) is the Bank of England's Ben Broadbent, who describes the idea of a central bank adding more counterparties-


"perhaps a wide range of non-bank financial companies, say.  It might mean something more dramatic:  in the limiting case, everyone – including individuals – would be able to hold such balances."

Echoing Broadbent, BoE Deputy Governor Minouche Shafik has spoken of the need to rethink "about to whom we give access to the advantages of central bank money with its unique qualities of finality of settlement." The idea here is to allow non-banks involved in fintech direct access to the Bank's real time gross settlement system, as Mark Carney goes on to illustrate here.

Turning to the blogosphere, John Cochrane has recently written about having all money backed by the government in order to end bank runs. And in the same vein, here is David Andolfatto's idea of allowing TreasuryDirect balances to be tradeable, thus providing individuals and firms with a safe place to keep cash other than the banking or shadow banking system.

This democratization of central banking sounds like a novel idea. Nosing deeper into the Bank of England's history, however, we learn that it was not just employees who could hold Bank of England deposits; most people could. Some of them were quite famous. An interesting anecdote from the 1700s has Sarah, Duchess of Marlborough, asking her bankers at the Bank of England to provide her with a freebie, namely some pens because she 'could get none that were good.' [1]

Moving forward a century, we learn that upon opening for business in 1855 the Bank of England's Western branch tended to attract small businessmen and private individuals "of modest means" as clients, including the accounts of the University of London, a Regent Street hatter, and a Sackville Street clothier—all on its first day of operations. Later that year the household of Queen Victoria left its private bank in order to do business with the Western branch. By all accounts, the Bank of England seems to have had excellent service:


"Staff were expected to recognize customers on sight and have a good, clear hand for writing up passbooks. Two porters were always on duty at the main entrance, clad in the pink livery of the Bank of England with silk top hats, and even the cashiers wore top hats when serving at the counter." [2]

The Bank of England kept up a retail presence well into the 1900s. But as public service came to be regarded as the Bank's main role, the aggressiveness of its commercial and retail businesses was reduced and it transitioned into a purely bankers' bank. The Western branch would be sold in 1930 to the Royal Bank of Scotland. [3]

By 1963 the Bank of England's services to the public were limited to a small number of accounts for existing customers. Presumably as they died, these accounts were closed. The most recent example of the Bank of England allowing non-banks to set up accounts comes from 2003, when Bank officials decided to provide Huntingdon Live Sciences, a drug company facing threats from animal rights activists, with a BoE account because commercial banks refused to offer their services.

So while it may seem that the Bank of England's Broadbent and Shafik are introducing a modern approach to central banking, the practice of allowing private individuals and non-financial businesses to directly hold central bank balance sheet space (in a non-cash form) is actually an old one. What lessons can we take from this historical example?

Many people believe that an open central bank balance sheet has the potential to render our traditional banking system extinct. Banks are special. They provide the world's most popular exhange media—deposits—as an offshoot of their primary business, lending. But as Robert Sams points out, if individuals are allowed to own safe central bank deposits directly there may no  longer be a reason for them to hold risky bank accounts. Demand for bank deposits falling to zero, banks will have to fund their loans to the public with regular bonds or equity, even as payments are re-routed through the books of the central bank. Fractional reserve banking as we know it is dead.

Depending on who you ask, the replacement of fractional reserve banking with so-called narrow banking, or 100% reserve banking, can be either good or bad. I'll leave that discussion for another day. Whatever the case, Bank of England history illustrates that private bank deposits can coexist with an open central bank balance sheet. Given the choice between keeping accounts with the safe Western branch or a risky private bank, individuals did not collectively flock to the former.

No doubt this was partly due to the two things, the Bank of England's policy of charging for servicing unprofitable accounts and of not paying interest on deposits. Its competitors, on the other hand, did pay interest. In essence, private banks had to retain customers by offering better services.

Which brings us back to the Bank of England's recent decision to close employee accounts. Given the Bank's stated intention of opening up its balance sheet, wouldn't it have been an opportune time to open up its retail banking business to all of England rather than shutting it down? The Bank maintains that it had been having trouble competing with services like online banking being offered by private banks. But as history shows, since a central bank offers something private banks can't —safety—it needn't be as competitive in the services it provides. Alternatively, it could be that the Bank will be following a different strategy of opening itself up, say through a distributed ledger or something like PositiveMoney's Digital Cash Accounts. Whatever the case, don't be fooled by the technological terminology; if the Bank were to open itself up, this would be more of a returning to the fold than a bold new future.