I've written a series of posts and tweets over the last month about cash and COVID-19.

The first set of posts has to do with the idea of banknote contamination.

In my research for BullionStar, I found that the odds of a banknote being contaminated by a virus depends to some degree on the type of banknote. Traditional paper banknotes like the U.S. dollar are probably a lot safer than plastic ones, since they have porous surfaces that are less welcoming to viruses. Polymer and coated banknotes, like what we have here in Canada, are non-porous and thus much more conducive to both virus survival and transferal to fingers.

Funny enough, one of my references for the article was an old presentation by the Federal Bank of New York's Gerald Stagg, an MD responsible for administering the FRBNY's staff compensation and comprehensive benefits programs. Appropriately enough, the doctor had a sideline interest in banknote cleanliness!


I suspect when all of this is over, central banks will have to conduct more intensive research on banknotes and pathogens. That way they can provide a prompt and standardized response come the next pandemic. Because right now they are all over the board. Hungary's central bank quarantined banknotes and heated them up to 170 degrees Celsius. Meanwhile the Bank of Canada advised Canadians not to panic, just wash your hands. This divergence hurts the credibility of both central bank's responses.

In a recent report on COVID-19 and cash, Raphael Auer and the folks at the BIS provide the following illustration showing how central bank have reacted through February and March:


My next post, this time for AIER's Sound Money Project, focused on the sudden changes to our shopping and payments habits that the coronavirus has brought about. At my local grocery I can no longer pay with cash, and when I go in (after waiting in a long line to ensure social distancing) they issue me plastic gloves. I found that during the Plague pandemics that swept through England and elsewhere in the 1600s, Brits were just as quick to modify their trading practices.

To help cope with the possibility that coins and marketplaces might help spread the plague,  so-called "vinegar stones" or "plague stones" were setup in out-of-the-way places. Villagers could go to these stones to conduct trade in a self-distancing manner with wary country-folk. The coins were put in a vinegar-filled bowl carved into the stone. It was believed that vinegar could counter the poisonous vapour that was believed (erronesouly) to spread the plague.


The main conclusion from my two posts was simple: if you're going to handle banknotes, don't touch your face. Wash your hands immediately after. And while you're at it, wash your hands after handling your debit or credit card, too.

Cash demand in a pandemic

The next series of posts and tweets dealt with the impact of the virus on the demand for cash. In an article for AIER, I showed that the demand for U.S. banknotes exhibited the largest week-to-week change since the year-2000 changeover in December 1999. Charted out, it looks like this:

We've seen the largest weekly increase in US banknotes in circulation since the Y2K jump in December 1999. pic.twitter.com/7e6AhKISpX
— John Paul Koning (@jp_koning) March 28, 2020


Let's not panic, though. This doesn't constitute a bank run. As I pointed out in the article, the total stock of U.S. dollar banknotes may have jumped by $70 billion in March. But that's nothing compared to the $15 trillion or so in checking and savings deposits in existence, not to mention trillions more overseas.

There are all sorts of ways to visualize the quantity of banknotes in circulation. I came up with what I think is a more intuitive approach below: 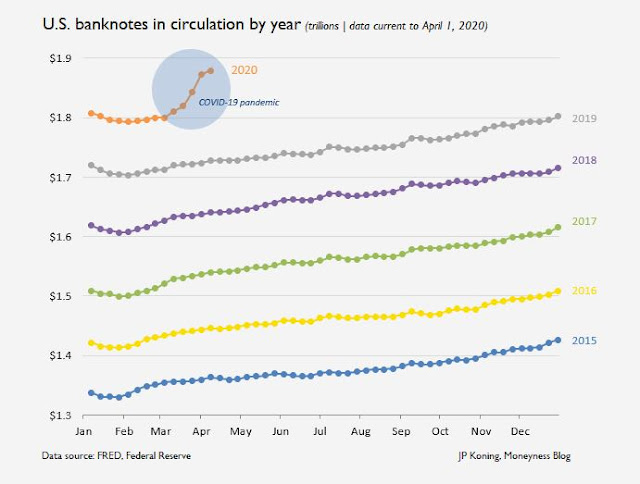 This chart shows how much cash Canadians have withdrawn to cope with the pandemic.

An extra $4 billion in banknotes are now in circulation, or $100 per Canadian. That's not much... no more than the extra notes we normally stock up on each Christmas/New Year. pic.twitter.com/PYkrzWVbFl
— John Paul Koning (@jp_koning) April 4, 2020


And the Australian data: 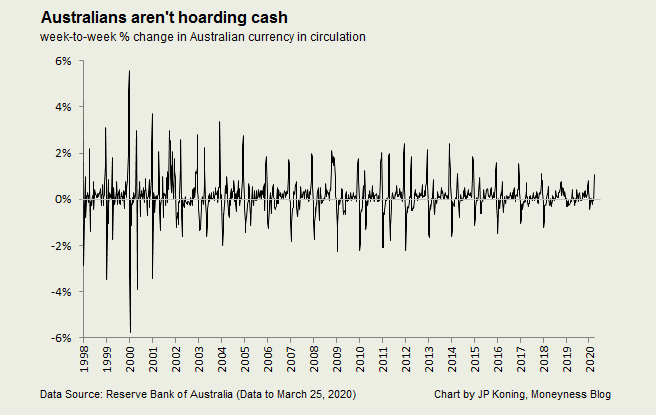 Some degree of cash restocking makes sense in an emergency like the one we are living through. In fact, a number of governments advise citizens to hold cash as part of their emergency preparedness guidelines.

The US Department of Homeland Security advises Americans to always have a kit that includes cash and travelers checks. The Canadian government's Family Emergency Plan template suggests that Canadians keep "some cash in smaller bills, such as $10 bills and change for payphones". And Sweden's emergency guidelines also advise that Swede's keep small bills on hand.