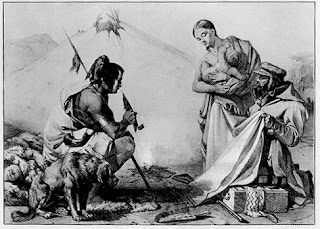 Here's why this blog is called Moneyness.

Then you figure out what set of rules apply specifically to money and what set of rules apply to non-monies (and what applies to both). The quantity theory of money is a good example of a theory that emerges from this way of splitting up of the world. The quantity theory posits a number of objects M that belong in the relation MV=PY. Non M's needn't apply.

The second way to classify the world is to take everything out of these bins and ask the following sorts of questions: in what way are all of these things moneylike? How does the element of moneyness inhere in every valuable object? To what degree is some item more liquid than another? This second approach involves figuring out what set of rules determine an item's moneyness and what set determines the rest of that item's value (its non-moneyness).

In general, the first way of dividing the world has been overrepresented in the history of monetary discourse. I'd weight its prevalence at around 90%. Take Keynes's General Theory. Almost the entire book uses the noun-based approach to monetary analysis, except for Chapter 17 (and a small bit in Chapter 23). It's only then that Keynes describes the idea of a liquidity premium that inheres in all assets:


the power of disposal over an asset during a period may offer a potential convenience or security, which is not equal for assets of different kinds, though the assets themselves are of equal initial value. There is, so to speak, nothing to show for this at the end of the period in the shape of output; yet it is something for which people are ready to pay something.

In my posts I try to do two things. First, I make my best effort to always speak in the under-represented language of moneyness, not money. Not that there's anything wrong in splitting the world into money and non-money. But any method of dividing the universe will determine what one sees. Reclassify the universe along different lines and a whole new world emerges. With most monetary economics having been conducted in terms of money, there's probably a lot we've never seen.

Secondly, I hope to remind people that while you can choose either of the two ways to classify the world, you need to be consistent when you use them. Don't switch arbitrarily between the two.

With that being said, here are a few posts that illustrate the idea of moneyness.